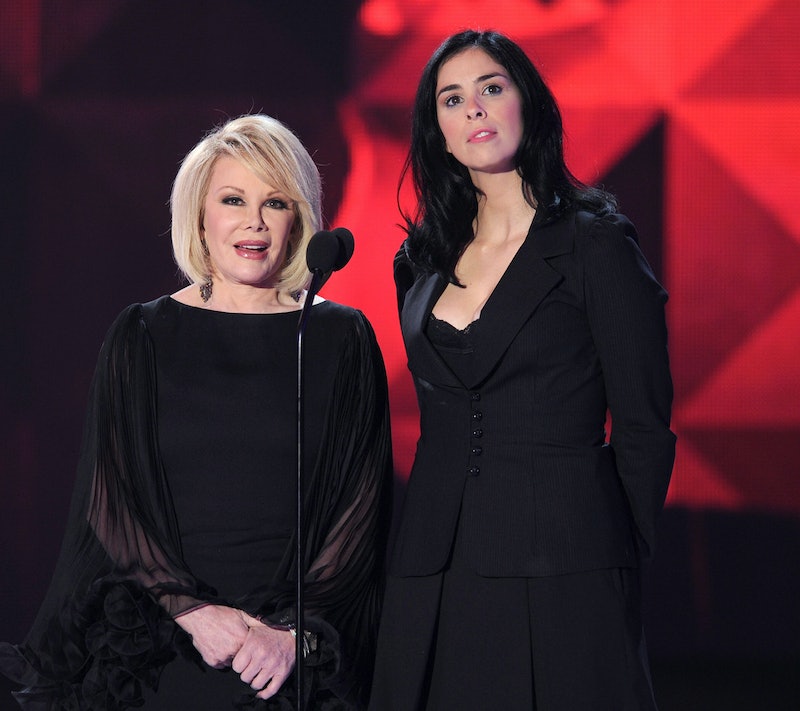 There is no doubt that one of the most fearless women in comedy was the late Joan Rivers. Another fearless woman in comedy is Sarah Silverman, so it made sense when Saturday Night Live used host Sarah Silverman to pay tribute to the great Joan Rivers in a sketch Saturday night. And while I know that the skit was slightly uncomfortable, it was done with the best intentions, and Rivers' herself probably would have loved it.

The skit itself served as a "Welcome to Heaven!" roast, where Silverman, as Rivers, roasted famous faces that have passed before her. Steve Jobs, Ben Franklin, and Freddie Mercury — played by musical guest Adam Levine — among others sat at the table as Silverman's Rivers playfully tore into them, like the comedian was known for. It was very well-written, after all, Silverman herself shares a similar comedic sense as Rivers' had, but it just had this lingering, "Ehhhh I don't know how I feel about this" feeling throughout.

With that said, the skit didn't make fun of Rivers' death. If anything, it celebrated Rivers' comedic style and her legacy that she left behind to inspire other comedians (like Silverman). Rivers' was known for her sharp tongue and her jokes that often made you think, "Was that too much?" so it makes sense that SNL would have pay tribute to her in the same way she paid tribute to her fellow entertainers every single day.

While I am sure some will be offended by the skit — it is still a fresh loss, and we still don't know exactly what happened that led to Rivers' death — I think it is important to focus on the well-intentions of the skit, and how perfect it was for honoring Rivers' legacy.