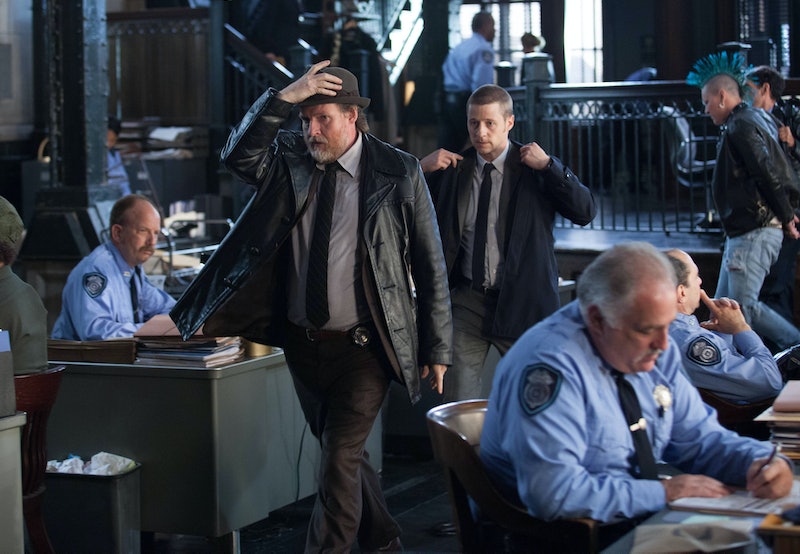 Obviously whomever edits together these Gotham previews doesn't want to give away too much. But in the third episode of the FOX series, it looks like in addition to everything else going on with Penguin, Mooney, Gordon, and young Bruce Wayne we get a new vigilante named "Balloonman." This Balloonman attaches crooked Gotham City cops to balloons and sends them floating off into the sky, which obviously lead to a deadly fall back down to Earth. It's an interesting — though unbelievably silly — hook, but may end up overwhelming the show with too many threads, unless they're able to unmask him by the end of the episode.

But like most of the characters on Gotham, the real fun comes from attempting to place them within the Batman mythos. While the name "Balloonman" sounds like a circus performer or clown, it's a bit too easy to assume this will be a Joker connection. They might mention it, put him in face paint, or give him a distinctive laugh, but there's no way they'd throw the iconic character out there so early into the series. However, there are a few possibilities for who Balloonman will be or become. First, get a short look at the villain in the preview below.

A pig mask is visible at the beginning of the teaser, which could point to Professor Pyg, a diabolical surgeon who runs a circus (who has a balloonman, maybe?) and also performs transformative surgeries on captives that turns them into "Dolltrons." And in the second episode, the child abductors said they were collecting victims for the "Dollmaker." Could be a clue towards Professor Pyg. Gotham Season 1 might be leading to the reveal of Pyg's Circus of Strange. He definitely falls on the dark, disturbing side of the Batman villain pantheon.

The show will probably go one of those two routes; either evil circus or balloon obsessive. But, one source claims FOX's official description of the episode calls the balloons weather balloons, and that points to "Balloonman" having access to scientific equipment, an interest in science, or working to monitor the climate. That points to a scientist or climatologist. But one who has some kind of chip on their shoulder about police, maybe a righteous anger about a death. There's Weather Wizard, the goofy DC villain who learned the power of weather control from his murdered brother.

But Weather Wizard is usually a Flash villain. Could this be a hint towards the temperature-obsessed Dr. Victor Fries, aka Mr. Freeze? Usually he's more biologist than meteorologist, but with global warming, maybe his ice ray could be used on the polar ice caps. It might be a long shot, but you can't deny that "ICE to see you" puns would fit right in with Gotham's sense of humor.