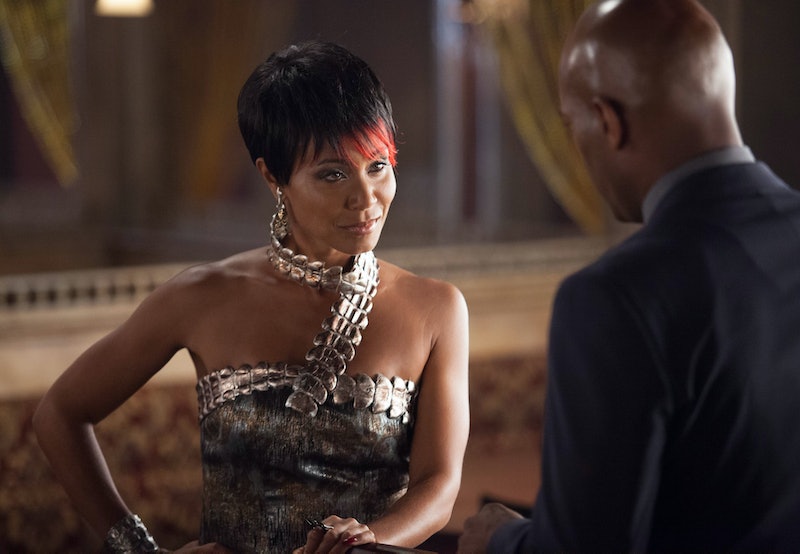 In a fall filled with pretty weak and generic pilots, Gotham, despite being kind of ridiculous, is actually becoming pretty fun. Jada Pinkett Smith's mobster, "Fish Mooney" is the best part of the show so far, by my estimation, since she's the only actor with a character well-shaded enough to imbue with a varied, detailed performance that balances hard menace with Eartha Kitt campiness. (Donal Louge also comes close, with Harvey Bullock being the only person on the other side of the law who seems to be in the same universe as the over-the-top villains.) But on Gotham Fish Mooney doesn't have a typical mobster name, and it could be a clue as to what's going to happen to her character.

There's a common freshwater fish called a mooneye, named for their big, glassy eyes. Like many fish in the herring family, they're skilled jumpers, but they're not predators and are easily caught or eaten by larger fish… maybe this means that we'll lose Fish Mooney not to a gruesome death, but to an orange jumpsuit. (Sidenote: Jada Pinkett on Orange Is the New Black — good idea? Great idea? You know what, they know what they're doing over there. I'm going to stay out of it.)

Fish Mooney could also just be a quick way to combine aquatic life and mobsters — I can't believe they haven't made a "swimming with the fishes" joke yet — a theme that's also true for recent Batman comic book villain Great White Shark. Warren White is a crooked embezzler who pulls a One Flew Over the Cuckoo's Nest, and gets sent to Arkham, where he is mutilated by Mr. Freeze's ice ray.

His nickname turns from "Fish," a slang term for the new guy in jail (another hint?), to "Great White Shark," a reference to both his nature and his crazed, toothy appearance. So after a good 15 episodes, we could see a transformed Jada covered in prothstetics and big fake teeth — or, at least, a few prison tattoos and a scar or two. And in case you think this theory is too out there, know that Entertainment Weekly is also considering it.

My final theory is both the craziest and the most predictable, so beware. Fish Mooney is just that, a "fish," and her former protege, Oswald Cobblepot, becomes a "penguin." And while that may simply be a reference to his sharp choice in suits, it's hard to overlook that out in the wild, penguins eat fish… is it insane to guess that the name Fish Mooney spells out her doom? And that she'll not just be thrown into the river to be disposed of/be with her namesake, but that maybe a crazed Penguin will take a bite first?

I don't know. Maybe I've just seen Danny DeVito slobber over gross, fishy entrails in Batman Returns one too many times, but it might be a fitting end for Fish Mooney.