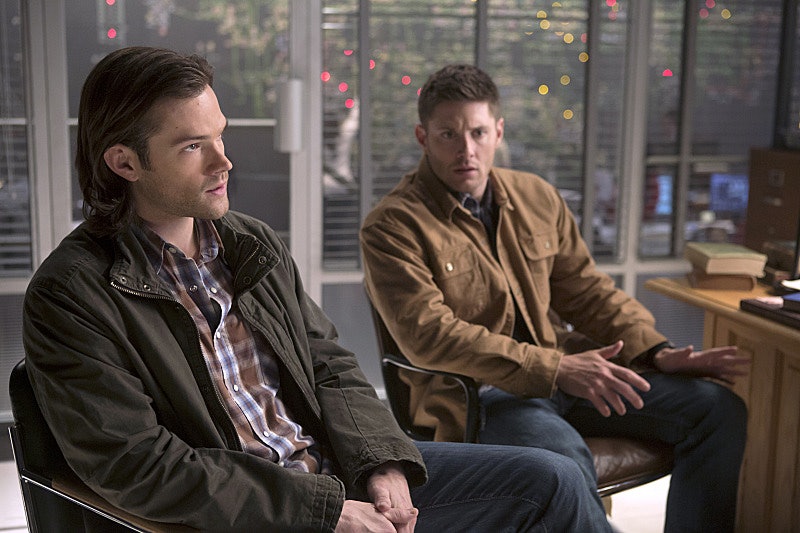 In this era of epic TV binge-watching, you should never be discouraged when it comes to getting into a brand new show. Even one that's as far along as The CW's Supernatural , which will return for Season 10 on Oct. 7. Crazy, right? It seems like just yesterday that Jared Padalecki and Jensen Ackles joined forces as brothers Dean and Sam Winchester to fight, well, the supernatural. And if you're late to the party, it could be just yesterday for you because there are plenty of ways to watch past seasons of Supernatural .

There are many avenues where you can follow the Winchester brothers as they take on their late father's duty of fighting evil monsters and demons throughout the country, so there's no excuse for you not to be ready for Season 10 in due time. I'm not saying you should give up sleep or forgo your social life (you can if you want to, though), but taking in straight 10 seasons at once is a true commitment to Supernatural. Don't think you can do it? Oh, you can. Just be aware that once you start binge-watching the series, you might not want to stop and, at the end, you might have to wait a week for the next new episode (gasp).

Thank goodness for Netflix, right? If you're a member, you currently have access to eight seasons of the CW show. What about Season 9? Unfortunately, Netflix won't have the rights to stream the ninth season — or its big season finale — until mere hours before Season 10 premieres on Oct. 7. Sure, you might miss out on the build-up to a big cliffhanger, but there are other options to buy you some time: DVR the premiere and binge on Netflix until you've fully ingested Season 9. Or you could...

Buy It On Amazon & iTunes

Amazon Instant Video and iTunes are lifesavers in these types of situations. Currently, the streaming services have Seasons 1-9 available for purchase for around $1.99-2.99 per episode, or about $19-25 per season. If you don't have Netflix, or you simply much catch up on Season 9 before Season 10 begins, Amazon and iTunes are the perfect option.

Still have cable? Check your cable company's On Dmeand selections — a lot of companies offer full past seasons of shows and you might be lucky enough that yours still has Season 9 of Supernatural up and ready for your viewing pleasure. Even better, your provider might put up the Season 10 season opener after it airs. Jackpot.

Get a Refresher on Hulu & The CW

If you're already caught up, but simply want to relive the tail end of Season 9 or a reminder of how it all went down, Hulu and The CW each host the final five episodes of the ninth season. But you'll have to act fast — once the tenth season premieres, one of those Season 9 episodes will vanish and be replaced by the first episode of Season 10.

So what are you waiting for? The Winchester boys are expecting you.