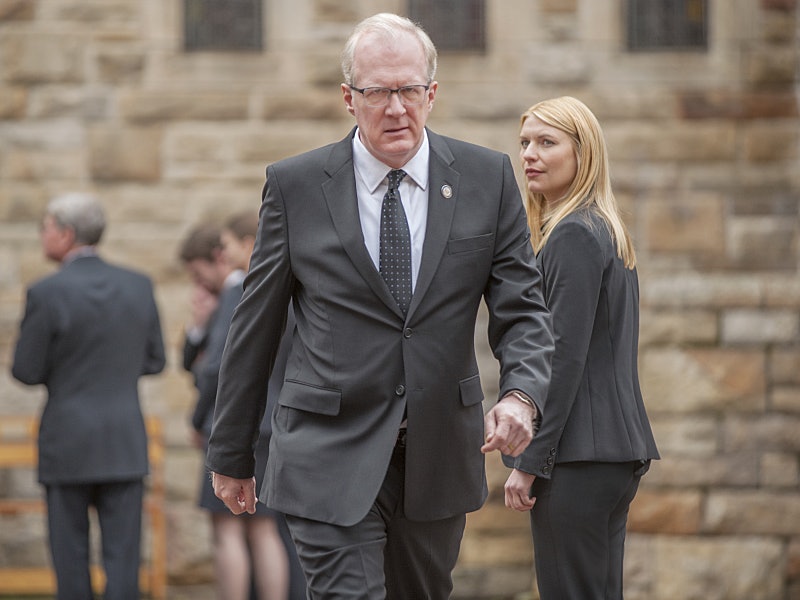 Ding dong, the witch is dead! Okay, maybe Homeland 's Director of the CIA Andrew Lockhart isn't actually dead, but his career just might be — and come on, you could practically see him saying, "I'll get you, my pretty! And your little dog, too!" Finally, Lockhart might be going down for being totally inept.

In the first half of the premiere, we learned that things were pretty darn shady in Islamabad — station chief Sandy Bachman's informant decidedly did not seem to do things by the CIA book (not that anyone on this show does). And in the second half? We found out that things were even worse than they seemed on the surface — it turns out that Sandy was trading top secret information in exchange for the locations of people on their hit list.

Bad, right? But it gets even worse: Director Lockhart knew about the sketchiness behind this too-good-to-be-true intel and he turned a blind eye — because he knew that the increased level of activity on the nation's kill-list would help make his troubled tenure as director look like a fruitful one. He even went so far as to sentence one of his field agents to career-death (archiving in an honest-to-god basement) to prevent the information from coming out. It's only when he tries to do the same to Carrie (except this time the punishment is accepting motherhood, womp-womp), that he finally gets the comeuppance he's been deserving of pretty much his entire tenure as director (woo-hoo!).

Yes, Carrie (with the help of Quinn, of course) puts the pieces together and decides to handily use them as blackmail. For now, all she asks for is an assignment as Islamabad's new Station Chief, but who knows what else she'll do with the information. It is, as she points out, treason. Maybe we'll finally be seeing the end of Lockhart's reign. Because add Carrie's blackmail to the fact that we saw Dar Adal telling Saul to get his ducks in line, and I'm feeling pretty good about the rest of the season.