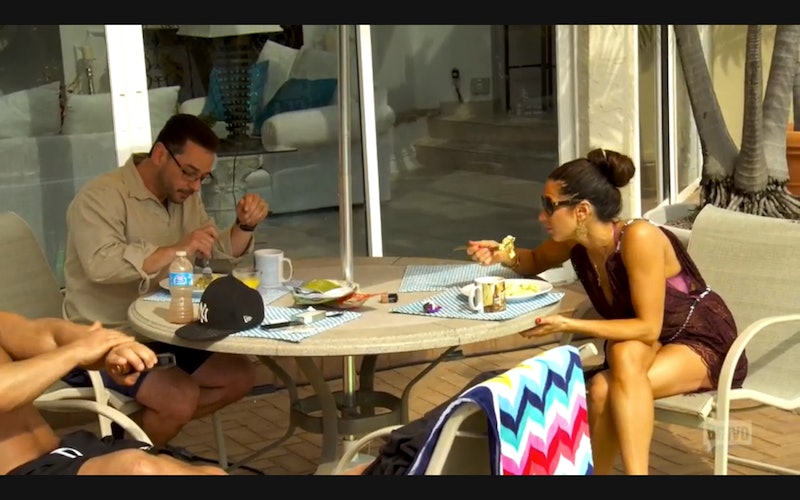 Wow, this week's episode of The Real Housewives of New Jersey, the second half of the Florida trip, wasted absolutely no time, did it? Within seconds, Jim Marchese was yelling about Teresa Aprea's husband sleeping with her mother, just minutes after accusing Nicole's boyfriend Bobby Cisulli of cheating on her for over a year. Then, cut to the next morning and the Marcheses are acting like everything is fine and dandy… until Dina walks up to them and straight up tells them to leave. And as they left with their tails between their legs, Teresa followed them, bailing on the rest of the trip to regroup with her husband, Rino, rather than opening another confrontation.

It's situations like this where Dina is appreciated. She's almost always incredibly calm, but she is never afraid to call someone out. She doesn't like when her friends get upset with her (remember her fear of telling Teresa that she had even heard about the rumors?), but when the twins started getting on her for just listening to what Teresa said, she didn't put up with it for a second. And she was the one who actually confronted the Marcheses about sticking around when they weren't welcome. Go Dina!

And her drunken insight: "Amber, I am sorry you are married to a dick," really sums up how this season is playing out. Any perceived crimes Amber has committed all boil down to letting Jim spend any time in public ever. And Amber's not oblivious, either, based on what she said in her talking head interview: "He makes even social relationships a battle." Also, while we're quoting, "My shoes are worth more than this" is going to become my new motto. (Even though I'm pretty sure my most expensive pair of shoes is worth 45 bucks.)

But the bottom line is that Jim Marchese is out of his mind. He thinks being this sort of Machievellian schemer makes him the moral authority, a puppetmaster, and the star of the show. He throws out bombs, then laughs it off and talks down to everyone, even his wife, who was legitimately concerned about what he was doing. Somehow, he worked some of his magic on her, and by the next morning, she goes from being on the twins' side to defending him again. But their game plan makes no sense. Were they just planning to stick around and pretend that everything was normal? They're probably lucky that they left, or they may have ended up stranded in a swamp surrounded by gators.