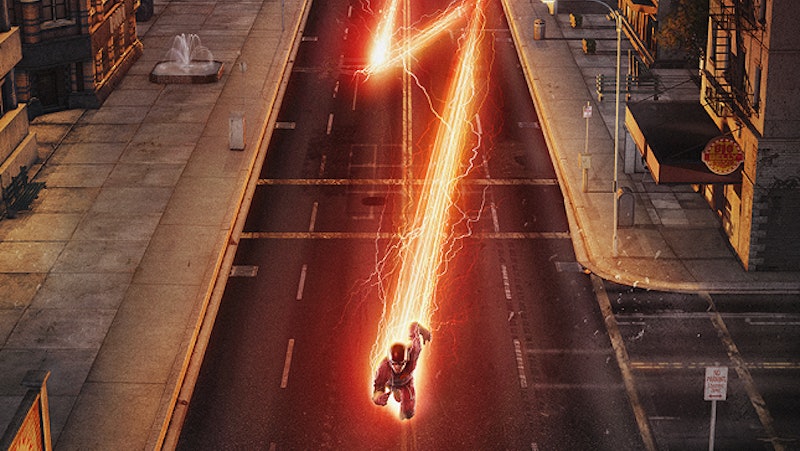 Now that summer is officially winding down (boo!) it’s time to start turning our full attention to the upcoming fall TV show premieres (yay!). But one show, in particular, that has been quick to catch my attention is The CW’s highly anticipated superhero drama The Flash , which premieres on Oct. 7. And while this may still feel like ions away from now, the network has given its perspective viewers quite a bit to contemplate ever since it released The Flash ’s official poster, which as Entertainment Weekly pointed out, just so happens to be chock-full of some major spoilers.

Upon first glance, you may not have noticed anything substantially interesting about the promo image. From afar, it simply looks like Barry Allen super-speeding down an oddly empty street, leaving only his iconic lightning bolt emblem in his wake. But if you look close enough, you’ll notice some giant DC Comic-sized Easter eggs hidden throughout the city’s skyline. Think the writers are trying to tell us something? These subtle, but very telling nods to other well-known comics could be a huge indicator of what fans can expect for the show’s upcoming first season. The trick, however, is being able to spot them all. Test your superhero knowledge below and see how many clues you’re able to find. (Don’t blink, though — or you’ll miss them.) On your mark… get set… GO!!!

Further proving that fans can expect a few Arrow / The Flash crossover episodes in the near future, the image above highlights two very prominent buildings from Starling City. The first being Oliver Queen’s company, Queen Consolidated (located at the top-right), and the second being Big Belly Burger, one of DC Comics’ most popular fast-food franchises, which has already been showcased on Arrow. (I like to think of it as the superhero equivalent to In-N-Out.)

Stagg, of course, refers to Simon Stagg, known throughout the DC universe as a shrewd businessman who indirectly leads to the creation of Metamorpho. Could this indicate that we’ll be seeing yet another superhero pop up in Central City sometime this season? Given the company's prominent placement in the poster (directly across from Queen Consolidated) and the fact that actor William Sadler has already been cast to play the part of Stagg in episode two (and perhaps more), I'd say this character's presence is pretty much a guarantee.

Given how far away the buildings are, many fans have speculated that what we believe to be Stagg Enterprises is actually Wayne Enterprises, which would signify the potential appearance of Batman. However, given that Gotham will be premiering on FOX later this fall, I’m fairly confident this Dark Knight character will remain off-limits for the Arrowverse… at least for now.

One can’t help but notice that the sign shown on the bottom left corner looks an awful lot like the Palmer Technologies logo highlighted in a past Flash promo. We already know Brandon Routh will play the role of Ray Palmer — aka The Atom — and serve as a potential love interest for Felicity on Arrow. (Brace yourselves, Olicity ‘shippers!) So having his sign show up on the poster actually makes total sense.

Again, this is slightly difficult to read, but if you hard enough you’ll notice the words “Grodd lives” written in graffiti on the sidewalk in the bottom right corner. This is a reference to Gorilla Grodd — a classic Flash villain who will no doubt also be making an appearance sometime throughout the course of the show's first season. All I can say is Bring. It. On.

This company (located in the middle-left side of the poster) is where John Henry Irons (aka Steel) worked as a defense contractor, designing hi-tech weapons, before opting to go into the superhero business. Perhaps this means we’ll be learning more about his backstory as well? I'm sure the weapons he helped to create won't come back to haunt him or anything.

Further up the street from Amertek, you'll notice a building with the word “Kord” written on it. In keeping with this superhero theme, this has to be in reference to Ted Kord, otherwise known as The Blue Beetle. So I wouldn’t be too surprised if this super-genius ends up gracing our television screens sometime this fall as well. The more, the merrier, I say!

This one shouldn’t come as a big surprise given that we’ve already seen this laboratory on Arrow, but it still seems worth including. After all, S.T.A.R. Labs is where the particle accelerator exploded, giving Barry the jump-start to his speedy new powers. Odds are we’ll be seeing a lot of this place in the near future. (Found below Queen Consolidated.)

This may just be wishful thinking on my part, but does that water tower to the left of Stagg Enterprises look similar to the one showcased on Smallville? If this is a hint that Superman (or even better, Tom Welling's Superman) will be making an appearance at some point, then I am officially fangirling out.

Seriously though, how awesome would that be? Here’s hoping September goes by in a flash.