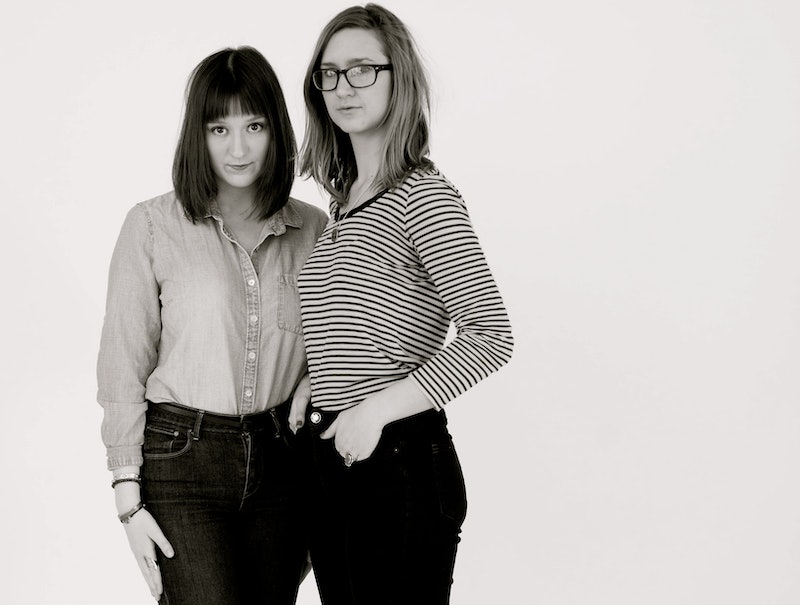 Kaylen Ralph and Joanna Demkiewicz graduated from the University of Missouri in May, prepared to tackle that problem of women's underrepresentation in journalism by starting a new print magazine.

Long-form print in 2013? Yup, and it's working: The two j-school grads have made it their mission to highlight the voices of women writers, in an effort to correct the stubborn gender disparities of their more established counterparts. With one successful crowd-funding campaign behind them, The Riveter has hit the physical (and virtual) stands.

As a group of women writers, we at Bustle wanted to know more.

I've read that this project has been a few years in the making for you. Tell me more about the inspiration behind The Riveter.

Joanna: Kaylen and I were sort of immediately attracted to each other and realized we both had a passion for something that didn’t exist. We were in a writing class together, where we did a lot of reading and we had a lot of assignments for more long-form pieces. And that’s when the American Society of Magazine Editors’ award results came out in spring of 2012. We were literally sitting in class, and the reality was that not one woman was nominated for a magazine writing category.

Kaylen: There was huge reaction and a lot of people were angry, including a lot of our female classmates. Because we were sitting in a journalism class in which there was a handful of guys and the rest were women.

Joanna: Always. Consistently. In every single class, it had to have been 70-30 or 80-20. In every class we were in. It may have been different for other programs but for the magazine sequence, that’s how it was.

And I’m sure as you know from your research, those ratios tend to exist in the magazine world itself. You have the lower ranks of magazines filled out by entry-level, mid-level women, while most top editorial positions are filled by men.

Ariana: So how did you explain the disparity? What came up in your discussion?

Kaylen: Well, our discussion tended toward: Women’s magazines exist. Why isn’t women’s writing being recognized? And our professor at the time just kind of threw it out there: ‘Women, you just need to do it yourselves.’ It’s essentially the frame we were given from a lot of people. So we’ve just focused on doing it. But "why" is a question we think about a lot.

Joanna: Really, I mean it’s not just the magazine industry. It’s every industry. Women are definitely fighting against the patriarchy and the capitalist norm and all of those words for sure. We'd heard, ‘There are fewer women long-formers because they became mothers and they had families now.’ So they just didn’t have the time, or something like that.

Kaylen: We’re actively dispelling that stereotype and assumption. That women don’t have the time or energy to do long form — our magazine shows that is not the case. And our goal is to highlight the work that women are doing in producing that work.

Devil’s advocate: There’s a strain of thought that says: “Why create another woman’s magazine and relegate good writing to the so-called “pink ghetto”? So, why is The Riveter gender-specific?

Joanna: Well, perhaps in a way Kaylen and I have created a product that eventually won’t exist anymore. Now, I say that sort of half-seriously, but I mean we created this when we were in the very intense, intellectual, energetic environment of journalism school. And we didn’t see ourselves existing post-graduation. We didn’t often see examples of ourselves; where we could exist afterward. So our goal simply was to create a platform. Simply, a way to let women exist on one platform — until, eventually, in a lovely, perfect, equal world, Riveter won’t even have to exist.

Kaylen: Or, The Riveter won’t only have to publish women.

Kaylen: Simply put, we’re attempting to correct a very real gender disparity that exists in commercial magazines that do specialize in long-form. I mean the VIDA count is ironclad proof that women are not being published as much as men in this genre, specifically. And that’s not a trend that has been improving. The 2012 count is not markedly better than 2011, than 2010, etc. So that’s a very well-documented problem, and we aim to correct that. At The Riveter, our goal is to correct that by creating this platform that publishes women doing the kind of work that is not being published elsewhere right now.

So you both recently graduated from J-School. And you say you’re both moving to Minneapolis. Will editing Riveter be your full time job?

Joanna: It will be our full time job, on top of the other jobs that we will have to get to pay the bills. Because Kaylen and I are just completely doing this because we have to do it. And we feel most self-actualized when we are doing it. And hopefully, soon, we can come to a place where it is s our full, full, full time job. But one of the great things about being roommates is that we will be able to work on it morning, evening, afternoons. Whenever.

Kaylen: Now that we’re college graduates we’re always getting the questions like, ‘What are you doing?’ and ‘Where are you working?’ And our answer is always “The Riveter.” But Joanna’s working at a Greek restaurant, and I’m working at an optometrist's office. We’re both doing whatever we can to support ourselves while we support our passion. And the writers who we are featuring. I mean regardless of gender, writers should be paid for their work and that is one of the biggest things that we are very passionate about. I feel like I’ve said the word passionate a million times —

Kaylen: — because we are very intent on maintaining a system for compensation for our writers.

Do you see this as a crowd-funded product for awhile? Are you hoping to eventually raise advertising money? How do you plan to make this financially sustainable?

Kaylen: We are looking into several different business models right now. Obviously no magazine supports itself on subscribers alone.

Joanna: To be honest, we’re a tiny bit wary about advertising. We don’t want that content to be interrupted. We want to maintain our mission to be focused on the content. So for a while longer, this product will be crowd-funded for sure. And then we hope a more tight-knit business plan will come from that.

Kaylen: Yeah. At these early stages we're really exploring our different options. You know, the advertising route. We’re applying for grants. We are looking into, you know, maybe even venture capital funding, as Bustle was so successful with. But as I’m sure you know, in this country, women aren’t getting those big dollars.

I’d love to talk about your reaction to Bustle and the backlash to our debut. How closely did you follow what people were saying?

Kaylen: I’m sure you saw it as well, after our profile came out in Poynter, a lot of people were comparing us and Bustle. So, of course, you know, we researched it, but other than that, I don’t know if we were really following it from the start, the backlash.

Joanna: Yeah exactly, and sometimes that backlash that happens, especially via twitter or blogs, or any online source, it goes so fast, it goes boom boom boom, and I feel that sometimes it’s quite unproductive. To answer your question, we probably weren’t following it if you mean following everything that kept coming out because, I don’t know, it often feels very unproductive and like nothing is resolved.

Well, we know people will draw parallels for us when they see your name on the site for us. And among the many critiques of Bustle...

Well, I'm obviously a Bustle writer, and I know we want to have open dialogue about it.

Joanna: I think that people are just drawing a parallel simply because it’s like, Women’s magazine! Women’s magazine! So there’s this really general parallel being drawn when there’s [actually] a big community we’re both a part of.

Kaylen: We don’t operate on the same system as many literary magazines in that you send us a completed piece and it’s either accepted or rejected. We have accepted pieces at various stages of development.

Joanna: And that approach has been, I think we’ve gotten a lot of great feedback from writers that we’ve published and haven’t published. Like Kaylen was saying, we’ve heard from writers again now already. We don’t like the term “reject.” We’ll never say like, “Eh, rejected. Bzzt.” We’ll say, “These are our thoughts, these are our ideas, we appreciate what you have right now, but we’re thinking this and this and this. And then we’ve heard back, haven’t we Kaylen? From a few writers who are like “Hey, I worked on my piece.” Even like a month later. So we don’t want to create a cold environment where it’s either yay or nay. And we remember the names of writers we’ve worked with before, and we’re excited to hear from them again. And I think that it shows.

What's up next for The Riveter?

More like this
34 Quotes That'll Inspire You On Juneteenth & Beyond
By Syeda Khaula Saad and Siena Gagliano
Here's Your Daily Horoscope For June 24, 2022
By Mecca Woods
How To Fight For Reproductive Rights, Based On How Much Time You Have
By Courtney Young
How To Protect Your Digital Privacy If You Need An Abortion Post-Roe
By Kaitlyn Wylde
Get Even More From Bustle — Sign Up For The Newsletter