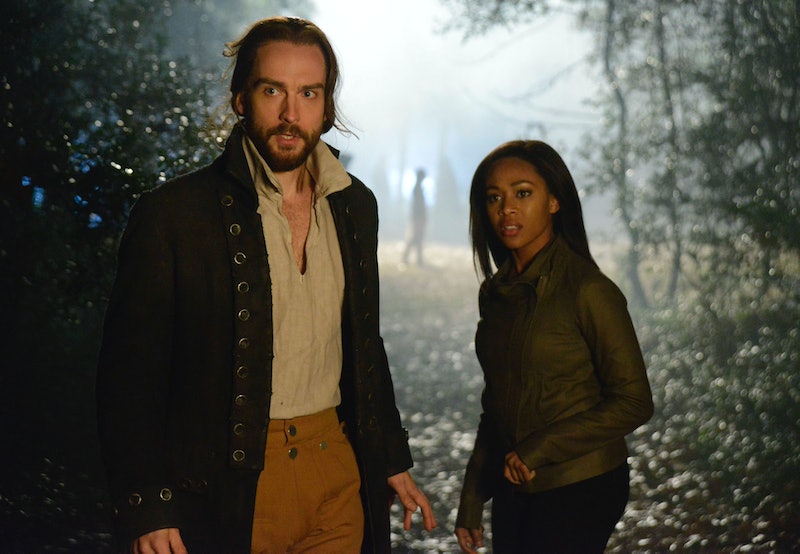 Let me just start off by saying that I love ‘shipping. Yup… no matter what show I’m watching, chances are I’m bound to find a star-crossed pair worth rooting for. One could even say that I ‘ship ‘shipping. (Too far?) Anyway, the point is I am always up for a good potential love interest, which is one of the things that immediately caught my eye when Sleepy Hollow first premiered last year. Ichabod and Abbie have had such tangible chemistry ever since Day 1 that fans automatically assume a Sleepy Hollow Ichabbie hook-up isn’t just possible, it’s inevitable. But is that really what we want?

I’m not saying I don’t personally want to see these two Witnesses get together because I totally do. I’m simply posing the question to see if our Sleepy heads match our Sleepy hormones. As much as I think I want this hook-up to happen — after all, Nicole Beharie and Tom Mison are adorable together both on-and-off-screen — I can’t help but wonder if it would be everything I want it to be. Perhaps I've built this romance up so much in my mind, that it's now become an impossible standard to reach. (Plus, a lot of times the anticipation is the best part, am I right?) So in order to be sure, I thought it'd be helpful to break down the pros and cons of this potential pairing.

Don’t act like you weren’t thinking the exact same thing. Sleepy Hollow fans would finally get the chance to see some major sparks fly between this duo, and given all the sexual energy those Season 2 hugs have already created, I’d say we’d be in for one very satisfying and steamy night of passion. We’d even get to see a shirtless Tom Mison again.

Either way, it’s a moment that could certainly heat things up for the show, and for once it has nothing to do with a visit to purgatory.

CON: It Could Take Away Abbie’s Independence

That’s not to say that being in a relationship necessarily takes away a woman’s independence. In fact, Ichabod’s the kind of guy who would hate to see that happen. However, one of the great things I love about Abbie is the fact that she doesn’t need a man to rescue her all the time. (You know, except when you’re stuck in a purgatory-type of situation.) But most of the time she’s more like the heroine and less like the damsel in distress (looking at you, Katrina). Just look at the amount of times she’s saved Ichabod’s life. Putting her not just into this relationship, but any relationship could take some of the focus away from her fierce independence. I want her to be happy, of course. But I also want her free to kick some demon ass.

PRO: They Both Could Use a Win

Let’s face it — life has not been easy for Ichabod ever since he first stumbled out of his coffin during the Season 1 premiere. And the same can be said for Abbie. Between all the headless horsemen encounters and late night prowls through the Sleepy Hollow archives (ever heard of this thing called Google, my friends?), these characters could really use a break. And what better way to help them unwind than with a passion-fueled, lip-locking session? And if this just so happens to lead to other things, then that’s their business. No judgments here.

CON: It Could Alter Their Friendship

Not all friendships involving a guy and a girl need to lead to something more, though it’s a concept that’s becoming harder and harder to prove in the entertainment world. But that doesn’t mean it’s what’s best for this particular relationship. Making that step from friends to lovers is a big deal and one that could severely change the dynamic that’s shared between Ichabod and Abbie — and maybe not for the better. What if things get awkward and we lose some of the Ichabbie banter? What if they break up? What if we find ourselves wanting them to break up? (Gasp!) We may not want to take that risk if it means preserving a connection we already know we love.

PRO: Did I Mention Tom Mison Would Probably Be Shirtless?

I just feel like it’s a pretty important reminder. Plus, just think of all the tender moments we'd get from these lovebirds that's sure to give us all the feels.

CON: Ichabod Is Married & Could Come Off As a Jerk

I’m not the biggest Katrina fan right now, mostly because she hasn’t really done anything other than be in need of constant rescuing even though she’s supposed to be a witch. (What is the deal with that?) Seeing Ichabod and Katrina part ways wouldn’t be the worst thing in the world, but some viewers could come deem Ichabod's moving on as a selfish move on his part. Abandoning your wife for another woman isn't exactly the act of a gentleman. His loyalty and chivalry are two of Ichabod’s most charming attributes (that and his dreamy British accent, of course), so something like this could quite possibly take away some of that appeal.

Oh, who am I kidding? These two are just too perfect for words. Forget everything I just said. Team Ichabbie forever!