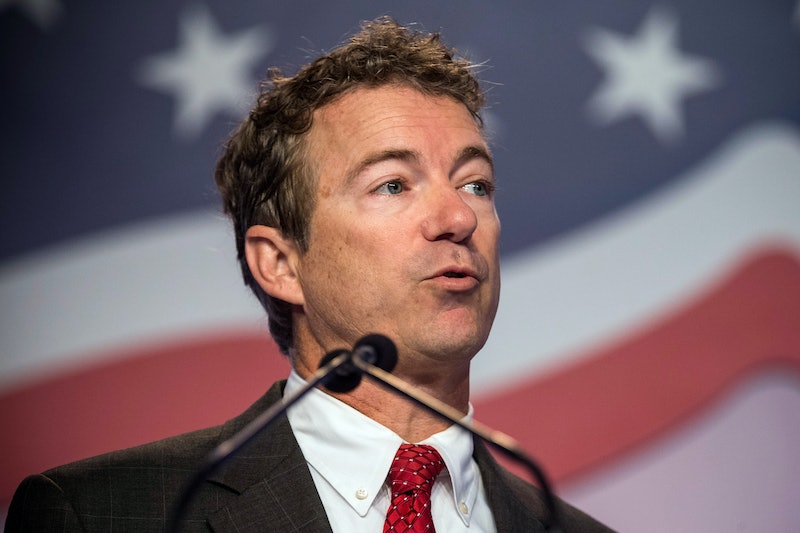 There are a lot of sensible reasons to be worried about the spread of the Ebola virus. In spite of how difficult it is to transmit, and how isolated the U.S. exposures have been to this point, Ebola is a highly deadly disease, and one with a harrowing set of symptoms. It's still pretty important to keep everything in perspective, and not cave in to our instincts to fear-monger. The GOP should try to work on that last one — top Republicans are blaming Obama for his Ebola response, and it's every bit as political as you might expect.

Foremost among them is likely Kentucky Sen. Rand Paul, whose presidential ambitions aren't terribly well-hidden — while less predictable by conservative orthodoxy than some of his colleagues, he'd be every bit as beholden to the GOP base in a 2016 run as the others. Basically, he's got to find chances to hurl a few rhetorical bombs when he can, but using the spectra of Ebola to achieve that end is troubling.

Speaking to conservative (and virulently anti-Obama) talk show host Laura Ingraham Wednesday, as detailed by MSNBC, Paul poured a little gasoline on the bonfire of the American public's Ebola fears.

... if you’re [having] a worldwide conference of African leaders right now, wouldn’t it make sense to delay it for four months and not have them all come to New York City? It’s ridiculous for them to be underplaying this threat and saying, ‘No big deal.' ... Imagine if a whole shipload of our soldiers get Ebola? I’m concerned about this. It’s a big mistake to downplay it, and act as if this is not a big deal, we can control all of this. This could get beyond our control.

In fairness to Paul, he's not entirely wrong. This could get out of our control, as could countless potential risks — the terrorism threat posed by ISIS, sagging food safety standards, or even climate change, which is already well out of control. But with something as serious as the West African Ebola outbreak, which likely requires some level of foreign aid and engagement to finally restore safety, there's something to be said for keeping a cool head about all this.

But what Paul suggested was quite to the contrary — as MSNBC's Emma Margolin highlighted, Paul even raised doubts about the current scientific understanding on how Ebola is transmitted, suggesting he was suspicious the virus was "a lot more transmissible" that anybody's letting on. That's going a little beyond just playing on people's fears, that's inflaming them.

A handful of other potential GOP 2016 candidates have weighed in on Ebola, as detailed by Politico.

Interestingly, there has been one presidential hopeful who's gone the other way with this — Texas Governor Rick Perry, who has the unenviable situation of overseeing the first confirmed Ebola case in the nation. Now faced with the reality of an Ebola patient within his state, and potential exposures beyond that, Perry's proximity has clearly informed his tact on the crisis — he's sought to ease public fears, rather than whip them up. While there's no telling for certain, if the first Ebola case had occurred in Kentucky, perhaps Senator Paul would have a similarly divergent tone on this.