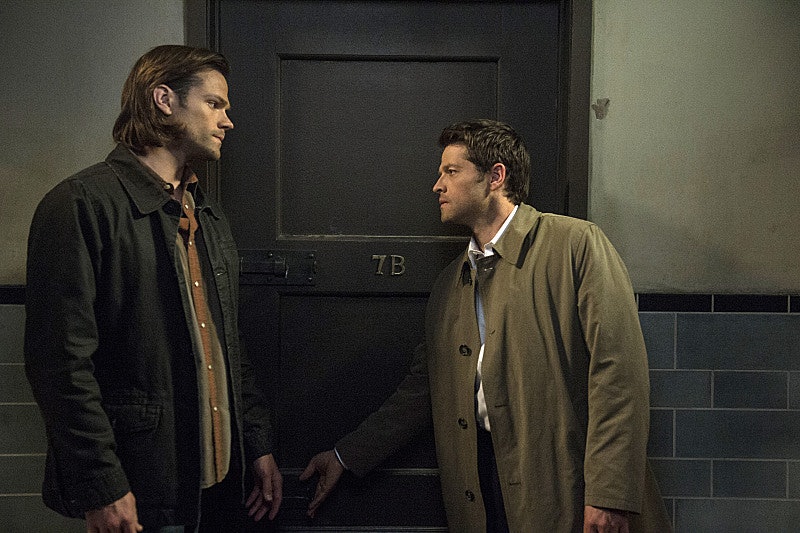 Can you believe it? The time has finally, finally come. Tuesday night will see the Supernatural Season 10 premiere of Dean, Sam, Castiel, and Crowley as they interact with more monsters that go bump in the night. But of course, rather than handling business as usual, Team Free Will will have to deal with something much greater and more serious than ever before: Dean is now a demon. Yes, it's been months since the Supernatural Season 9 finale and yet I still can't get over the demonic status of my dear older Winchester brother. Why, Supernatural writers? Why would you do this to me? To all of us?

Putting aside my obvious shock over this matter, the entire ninth season of Supernatural was pretty damn eventful, especially considering the end of Season 8 featured angels falling from Heaven thanks to the success of Metatron's plan to manipulate Castiel into giving Metatron his grace. Who would have thought the mousy guy living like a book hoarder in a small apartment would turn out to be one of the most powerful and difficult villains to beat in Supernatural history? Definitely not me. Before we start delving into Season 10 theories and spoilers, let's go back and analyze what happened in Season 9 and how the past could affect the future, because as we all know about this show, the past is more important than we realize.

After The Fall Of The Angels

There's nothing more chaotic that angels running around on Earth, unable to get back to into Heaven. And that's exactly what Metatron did with Castiel's unknowing assistance. Castiel also falls with the rest of his winged posse, but with the added problem of no longer having his grace. So basically, he's a straight-up human at this point. Dean calls Castiel for his help but later turns him away (there's a reason for this) and Cas ends up working at a gas station-style market. Eventually, he rejoins the brothers for different cases and steals grace from another angel. He also makes it his mission to find a way to send the angels back to Heaven and even has a faction that grows stronger and stronger behind him. He becomes a reluctant leader to his merry band of followers and eventually exposes Metatron's evil plan to become the new God. Metatron is locked away and now Cas is left with millions of angels in need of new management.

But Cas also has to deal with the fact that his stolen grace is dwindling, and unless he can find his own grace before the stolen amount is depleted, he will die — for good this time. Hopefully we see a different side to Castiel in Season 10. Will he do anything to get his grace back? How far down the rabbit hole will he have to go?

Sam's Savior Is The Angels' Villain

As you all know (and were probably worried about just like me), Sam went through serious medical problems while trying to complete the tasks to close the gates of Hell forever. Season 9 sees the younger Winchester brother in the hospital on the last legs of his life. Dean makes the ultimate decision to let an angel possess Sam and heal his wounds from the inside. Sam, of course, has no recollection of this. Dean finds out too late that the angel is not who he says he is, but is actually Gadreel, a disgraced angel who gets manipulated and brainwashed by Metatron to do his bidding. The first task on Gadreel’s list? Kill the prophet Kevin. It’s one of the series' most devastating moments as Dean doesn't make it in time to save the young kid he had always promised to protect. When Sam regains his body back, he is furious with his brother and tells him the fracture between them is incurable.

Later in the season, Sam helps Dean with his struggle against the Mark of Cain turning him into a monster, but Dean doesn’t accept his help. Sam ends the season seeing his brother die thanks to Metatron, but we all know what happens next. Sam will likely search for Dean in his new demonic state in Season 10, but what he does to find Dean might be more monstrous than his brother’s new identity.

While the first half of Supernatural Season 9 featured Dean trying to save his brother as he continued his search for Metatron, sought a way to kill Abbadon, and took on random cases (how do they find the time?), after the death of Kevin, everything changed. Dean became even more determined to take down everyone he can that is evil. On the top of that list are Abbadon and Metatron. Killing Abbadon, Dean discovers from Crowley, requires him to find Cain and get the First Blade, as the blade is the only thing that can kill a knight of hell (aka our first lady of Hell). Cain gives Dean his mark and tells him where to find the blade, which Crowley obtains as he is desperate to get rid of Abbadon so he can take back the power of Hell that he so rightfully believes he deserves. Dean grows stronger and stronger every time he holds the blade, but it also takes over and makes him more savage than ever before. Dean is able to kill Abbadon in the end and tries to take out Metatron as well, but the angel fatally wounds him. Dean dies, but is resurrected as a Demon.

All hell is clearly about to break loose, as a recent photos suggest Deanmon (as they’re calling him) is a more extreme version of Dean and… wait for it… he likes to do karaoke.

This I’ve got to see. Thank goodness Supernatural is back.