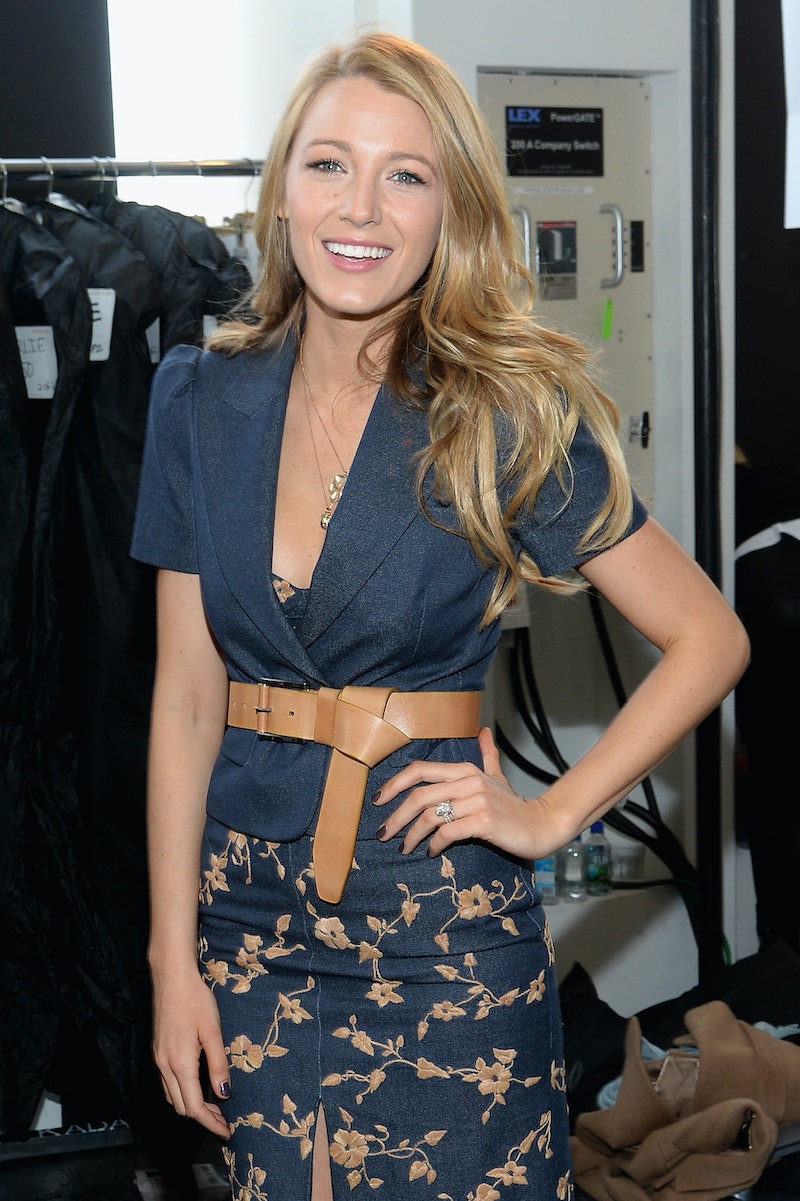 Hey Upper Eastsiders — and then some, for that matter — I suppose you’ve already heard the big news that Gossip Girl star Blake Lively is expecting her first child with husband Ryan Reynolds. Like a true gossip girl, Lively dropped a clever blast to announce her pregnancy on her site, Preserve, because I guess celebrities making big life announcements through their lifestyle websites is the new "thing" thanks to Gwyneth Paltrow. Though, of course, Lively and Reynolds seem to enjoy surprising us. Their Southern wedding, complete with stars and a Florence and the Machine performance, was all a secret. And while, all we have to go on is a photo of a pregnant Lively, hugging her round tummy, looking gorgeous per usual, she didn’t really tell us much about her pregnancy, like how far along is she, how Reynolds is feeling, or even if she has weird cravings like pumpkin spiced everything. Though, that could just be all of us getting into the fall spirit. All we know is, she is now the proud owner of a growing fetus and that her site now has some sweet maternity wear, but when is Blake Lively due? We'll have to figure out that answer ourselves.

I can't go by the size of her tummy to see how far along she is because every pregnancy is different, but traditionally, most couples wait until after their first trimester to make an announcement. This means that Lively could very well be three months along. Maybe Lively found out she was pregnant sometime in around July, meaning her baby could be due in April? Let's take a look at the

Was that a hint?

During an interview with Marie Claire for the fashion mag’s September issue, Lively did say that she had to start making a family soon and added, "If I could spit out a litter of kids, I would."

Magazines are planned further in advance to get all of the photography and interview scheduling in order, so this could have been months before September. Either the interview prompted Lively to start getting busy or she was hinting that she was pregnant at the time, maybe suffering from morning sickness already. That would make her "spit out a litter" comment make more sense.

During a Vogue interview published in August, Lively was already ill when she met the interviewer and asked to sit in the front of the car because she was getting motion sickness. Again, interviews and photo spreads are planned in advance, so maybe we were hearing about the early stages of pregnancy?

Is that why she reunited with the Sisterhood?

Three weeks ago, fellow Sisterhood of the Traveling Pants actress, Amber Tamblyn posted a reunion photo of all four of the film's stars reuniting. The caption read: "brunch with my best bitches. #sisterhood." You can't see Lively's tummy all the way in the back of the photo — possibly purposefully — behind Alexis Bledel and America Ferrera, but it would make sense that she dropped the news to her best friends before it went public. She'd also have to tell them they can keep sharing pants unless they're maternity.

Was she taking the pregnancy photos when she was chased by bees?

In August, Lively was attacked by a bunch of bees during a photo shoot. She blogged about it on Preserve:

Just moments before we were in the midst of a gorgeous fall fashion shoot. Now, I was a Monty Python sketch.

Maybe that fancy, fall photo shoot was the autumnal pics that announced her own pregnancy. If so, then that means Lively's gotta be at least three months along by now and that we can expect a spring time shower from the either Sisterhood or Blair Waldorf for the wee van Wilder or van der Woodsen.