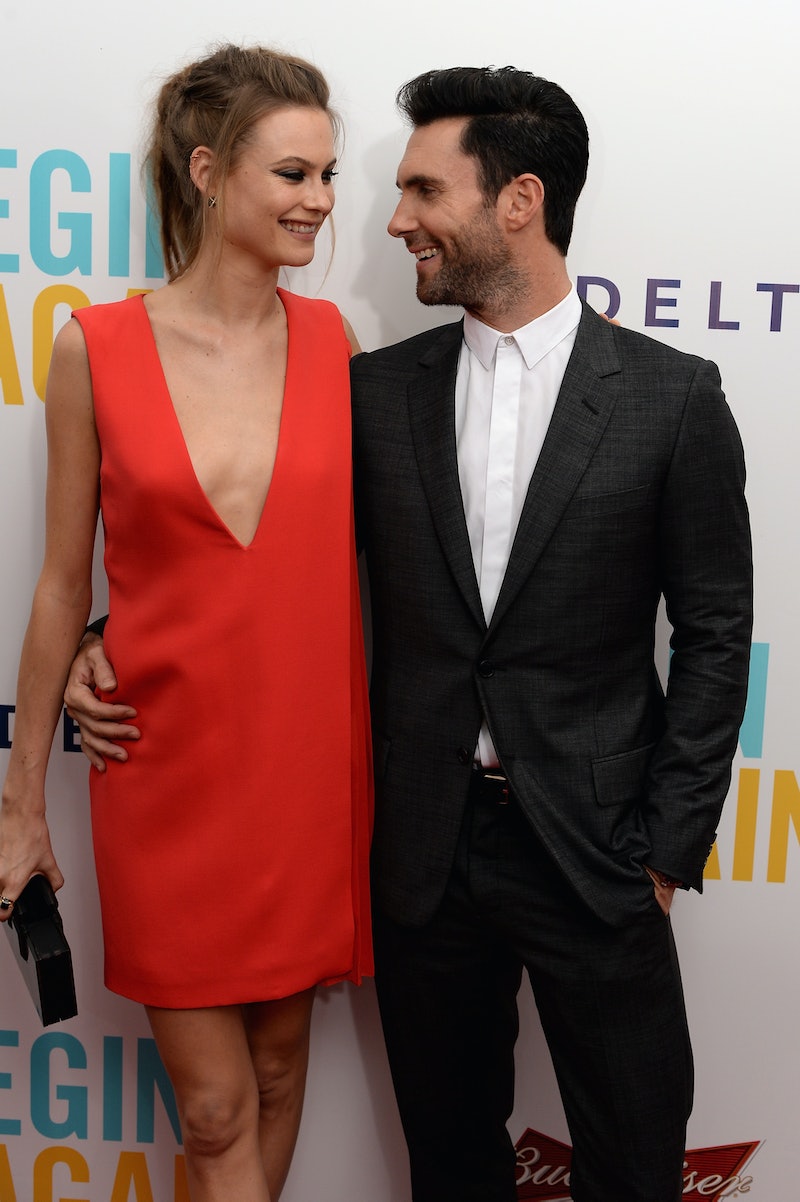 Ever since I watched Maroon 5's "Animals" music video, I cannot escape the vivid imagery of Adam Levine and Behati Prinsloo hooking up while covered in blood. That cringe-worthy visual aside, I have to admit that I think they are, otherwise, a cute couple. As a fan who has had a one-sided romance going with Levine since I was in high school, their relationship hit me hard out of nowhere. Then they got married and I have been bombarded by cute pictures of them on red carpets, running errands, backstage at fashion shows and concerts, and vacationing in tropical climates ever since. But I am finally at peace with it all now. This will probably provide some great material for Levine to write some new Maroon 5 songs for me to listen to and that is definitely a good thing. I did not think that Adam Levine, a notorious model dater, would actually settle down, but he did and I actually like it. But I wonder how they landed each other and evolved into the adorable couple that makes me super jealous to this day? Where did all this cuteness come from? How did Adam Levine meet Behati Prinsloo? Let's take a look at their history and find out.

Watching a Victoria's Secret fashion show is like watching a parade of Leonardo DiCaprio and Adam Levine's ex-girlfriends. Levine dated Victoria's Secret model Anne Vyalitsyna, known as Anne V, for two years. Anne V and Prinsloo, also a Victoria's Secret model, are (were?) supposedly close friends. Anne is said to have broken Levine's heart when she announced their breakup to People magazine without consulting with him about it first in April 2012. Did Anne introduce Levine and Prinsloo? It's hard to say if Anne made the introduction herself, but Levine did reportedly meet Prinsloo at the 2011 Victoria's Secret Fashion Show where Levine was performing, so there's a good chance Anne was involved.

Levine and Prinsloo had their first official outing together at a party for GQ magazine in October 2012, but they weren't together for long.

Yes, Levine was entangled with yet another Victoria's Secret angel. He had a short-lived romance with model Nina Agdal in May 2013. Yes, this was between the time he (at least appeared) to start dating Prinsloo and the time they got married.

Just when Levine seemed like he was enjoying his life as an eternal bachelor and modelizer, he got back together with Prinsloo and things got real serious when he proposed in July 2013. Rumor has it that he informed Agdal of the news via text message. Ouch.

A lot of Coupled Up Cuteness

After that awkward Victoria's Secret love square, Levine and Prinsloo were super cute posing for pictures on Instagram, dressing up together for Halloween, and attending each other's events.

The duo made it official by tying the knot on July 19, 2014 in Los Cabos, Mexico. There were plenty of celebrity guests and Victoria's Secret models present, including Erin Heatherton and Candice Swanepoel.

There seems to be zero trouble in paradise with the couple continuing to be affectionate in social media posts and real life. It's nice to see that they are so in love and that Levine has reformed his modelizing ways. In an interview with Jay Leno, Levine solidified that marital happiness by saying, "Famous last words, 'I'll never get married.' I still don't necessarily think you have to get married unless you meet someone that makes you want to marry them. And then you marry them and it's wonderful."