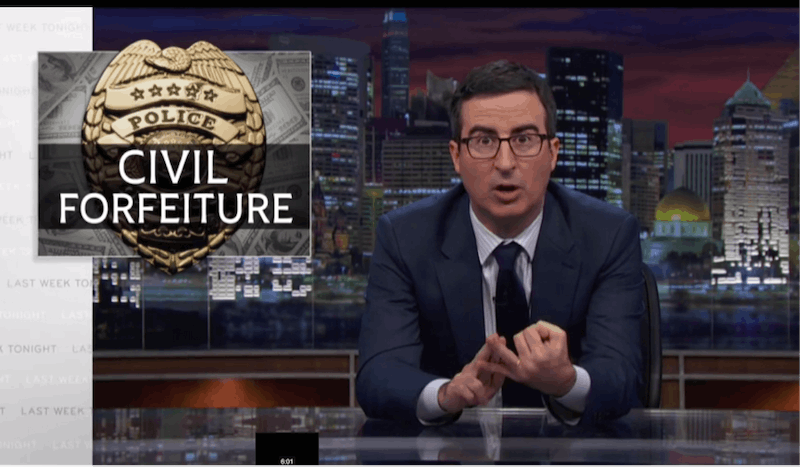 As with any ridiculous thing that happens in America, John Oliver used last night's episode of Last Week Tonight as a vehicle to both explain and lampoon absurd police seizure and prosecution of physical possessions. "Your property is guilty until proven innocent," he explains, which becomes all the more apparent as the late night talk show host highlights cases of civil forfeiture, each one more unbelievably laughable than the one before it. The singularly best part of this clip, however, comes at the very end of the video below: A "preview" of the (sadly) fictional Law and Order: Civil Forfeiture Unit. And who better than Jeff Goldblum to star in an American crime-drama series portraying the suspenseful, dangerous lives of three hardened cops fighting to save New York City from every suspicious looking thing they can find?

Spoiler: their top suspect? Your sofa.

Man, I gotta say, if I'd known about civil forfeiture as a kid, I would nipped those dreams about writing right in the bud and immediately become a cop. Because apparently, if I were a cop, I could just take anything I wanted from any person with no consequences. Hey, that's a nice iPhone 6. Looks suspicious, though, so I'd better take it. Hey, how's your coffee machine running? Still good? In that case, it's mine.

It sounds ridiculous, but it is dangerously close to the reality of the matter: through a process called civil forfeiture, police are permitted to seize people's property without convicting them of a crime. It often happens when people are pulled over—if there is a large amount of money in the car, police can seize it even if you have a reasonable explanation for it and there is nothing else suspicious going on.

But it doesn't just end with money. They can take cars, houses, any items that they deem "suspicious." Since 9/11, federal and state law enforcement has seized 2.5 billion dollars of property. And once they seize it, it's almost impossible to get back. But at least we'll always have the riotous memory of Goldblum interrogating a pile of cash. They can never cease that from us. #AMERICA