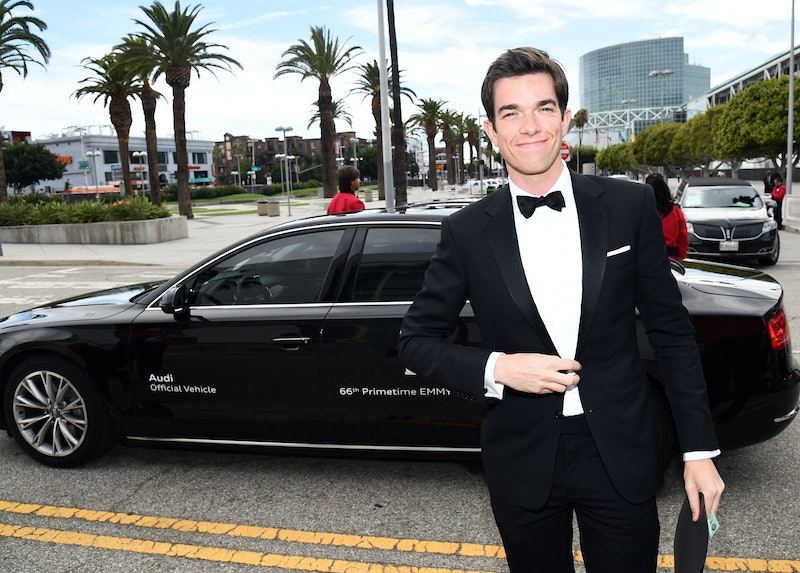 John Mulaney deserves better than this. The comedian's new Fox comedy Mulaney , which hardly won over critics, was a definite misfire with television viewers, too. The sitcom debuted to dismal ratings, with the series premiere earning a measly 2.3 million viewers and a 1.0 in the essential 18-49 demographic. As New York Magazine's Joe Adalain explained on Twitter, Mulaney "currently stands as the lowest-rated fall comedy launch ever (in A18-49) among the Big 4 networks." Ouch. That's more painful than an ill-advised trip to get Xanax. While these numbers don't bode well for the fate of Mulaney remaining on the fall schedule, fans of the former Saturday Night Live writer needn't worry that this seals the fate of John Mulaney's comedy career.

While Mulaney should have been a good show (it's always kind of amazing when you can get that much talent in a room and have it all go so terribly wrong), it isn't, but it won't be the defining part of the 32-year-old's career. If anything, it'll just be an unfortunate asterisk. So how am I so sure Mulaney will get past the failure of Mulaney? Well, for one, he's insanely talented (see: his great comedy special New in Town) and he helped give us one of the all-time great SNL characters, Stefon.

Here's the thing, comedy is a fickle business and success rarely comes overnight. There's often years of cutting one's teeth and having professional setbacks. Look no further than Louis C.K. Before the comedian was a respected, beloved, award-winning actor, writer, and director for his work on Louie, he had flops on both the small screen (Lucky Louie) and the big screen (Pootie Tang). Still, the funny man worked hard (throughout the early phases of his career he wrote for the likes of the Late Show with David Letterman and The Chris Rock Show, among others) and eventually his smart, unique, and biting comic voice found a huge audience. Louis C.K. didn't get very famous until his 40s, and this is someone who has been on the comedy circuit for years on end. He may just be the ultimate poster boy for keeping at it and honing your craft, no matter how many misfires you may have along the way.

In fact, Louis C.K. gave Mulaney some advice about transitioning to television. As Mulaney explained to Uproxx.com, "He had been through it a couple of times, so he had good advice about having the show be funny and making sure it has a flow to it, that it’s instinctively funny and not just comedy writing." Hey, if Mulaney is Mulaney's Lucky Louie, than imagine how good his version of Louie will be someday.

Another great thing about the art of comedy is its used as a healing tool, not only for the audience, but for the performer as well. Mike Birbiglia has taken his personal pain from a breakup and turned it into a successful book, movie, and various stand-up specials. The scars of Mulaney may be too soon for the comedian to joke about just yet, but if there's anything comedians know how to do, its turn their self-awareness about their shortcomings and heartaches into comedy gold. And Mulaney, much like Birbiglia, is a gifted storyteller.

But perhaps the most important proof that Mulaney will do just fine is that he has the support of his fans, friends, and loved ones. It's hard to imagine that fans who have been praising Mulaney for years ("You have to listen to his Salt and Pepper Diner bit!") are going to hold Mulaney against him. If anything, it'll just make us root for him to get his proper due even more. Plus, Mulaney has some famous friends and colleagues who are some pretty big supporters, too. Before the premiere of the doomed Mulaney, there were some very kind words from well-wishers on Twitter.

Mulaney is a charming, funny, and talented guy who just couldn't make the transition to sitcom star...yet. Sometimes nice guys do finish last, but they're often worth the wait.