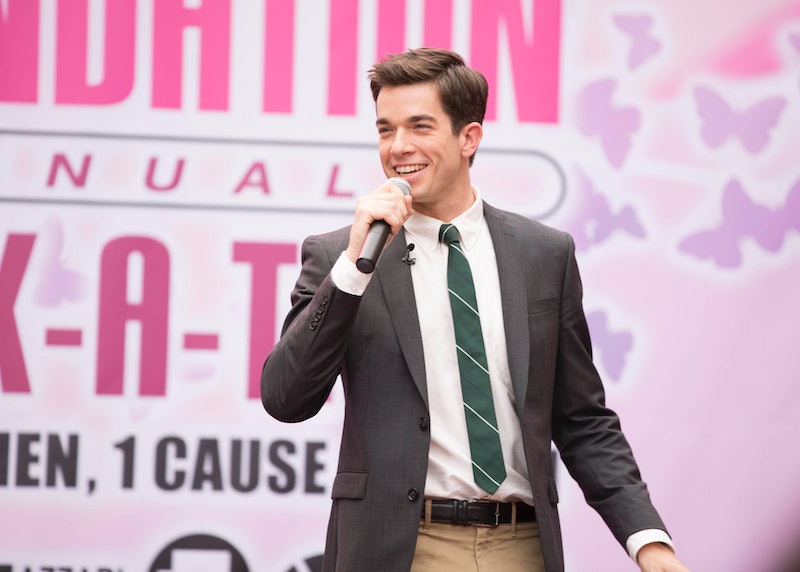 By now, you've probably heard the comparisons between John Mulaney's new FOX series Mulaney and Seinfeld. That sounds like a good thing, but it's actually not, as anyone who watched Sunday night's premiere likely realized that at this point, the two series only share a basic format and premise. As far as its actual content, Mulaney pulls that from John Mulaney's own standup comedy and while that also sounds like a good thing, it's actually not. At least not yet.

Mulaney follows the character of John Mulaney as he tries to make it as a comedian in New York City, and also focuses on his friends, eccentric neighbor, and crazy boss, with breaks for Mulaney's standup comedy. If you hadn't heard the Seinfeld comparisons, that sentence should be more than enough to explain them. For fans of Mulaney's standup, the only thing more familiar than the Seinfeld similarities are the jokes and dialogue in general, as much of it is pulled directly from his past material. Those jokes alone should be enough to make Mulaney a great comedy, but somehow they just fall flat.

Based on the pilot alone, Mulaney is easily the most disappointing new series of the season, and my heart is breaking as I write these words. Because I love John Mulaney. Ever since I caught New In Town playing late one night on Comedy Central, I have become kind of obsessed with the 32-year-old comedian. I sought out his older material online, looked back at Saturday Night Live sketches he wrote, looked forward to his appearances on Kroll Show, and bought the two completely overpriced drinks required to see him perform live last year. I can't have a conversation with my brother without one of us finding a way to slip in one of Mulaney's jokes. So why, when so much of the dialogue was pulled directly from those same jokes, did I dislike Mulaney?

I like to think that the show is just struggling to find its footing. Mulaney loves classic sitcoms, but his standup material is decidedly more modern, and I think he and the rest of the series' writers haven't figured out how to mesh the two yet. In the pilot, some of the jokes seem shoehorned in and as much as I hate to say it, because again, I love John Mulaney, his acting doesn't help.

There were moments during Mulaney where I felt like I was watching New In Town again, as the jokes just stood out from the rest of the scene and didn't really fit into the conversation between the characters. As John Mulaney the character leaned into his friend Motif in a doctor's waiting room and talked about his voice changing when someone knocks on the door of the bathroom, I was waiting for the camera to swing around and show us the audience that he's really talking to (who also provide the impossibly loud laugh track).

I'm not saying that Mulaney shouldn't utilize his standup material on his series — it's definitely worthy of a large TV audience — he just needs to figure out how to do it more organically. And he isn't the only person who needs to relax and remember that in the context of the show, he's supposed to in an apartment or waiting room and not on a stage. Many of the supporting characters are guilty of the exact same thing, and again, I'm really hoping that all of these problems will be fixed as the series continues. FOX has already ordered 16 episodes of Mulaney , which should give the show enough time to live up to its huge potential.

There were some bright spots in the pilot. New jokes that made me laugh (many delivered by Nasim Pedrad), everything about Elliott Gould, the running gag about Motif's bizarrely popular catchphrase "Problem Bitch," and most notably, the more subtle references to Mulaney's standup. When I heard Ice-T say that Mulaney was filmed in front of a live audience, I laughed almost as hard as when Dean Cain briefly appeared, and I was nothing short of delighted to hear Pedrad yell "Scatter!" If these highlights have anything in common, it's that they seemed to occur when Mulaney wasn't trying too hard. Maybe if we all stop trying to compare it to Seinfeld and give it a few weeks to figure out what exactly it wants to be, Mulaney will become as entertaining as the standup it's based on.