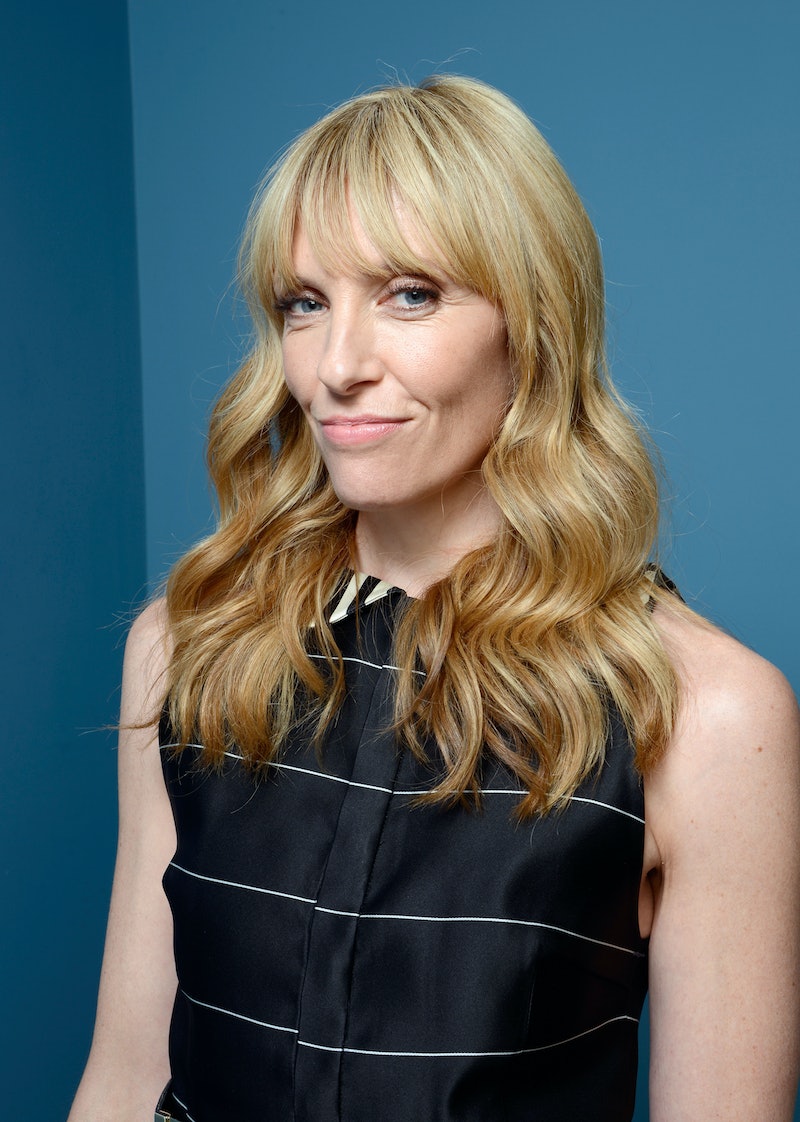 Toni Collette has transformed herself before for roles, but this might be the most dramatic change yet. On Monday, photos of the actress surfaced showing Collette's shaved head — completely and totally bald (no buzz!) for her upcoming film Miss You Already, costarring Drew Barrymore. Collette plays Milly, a woman diagnosed with breast cancer. Barrymore plays Jenn, her best friend, who's struggling to conceive a child. It's likely to be a charged performance from Collette, who's no stranger to emotionally fraught characters. There's just something about her that gives even her more conventional roles a certain depth.

Though perhaps she's not gone so far as to shave her head before, the women she's played are a pantheon of the unrecognizable. Even when she's not the star of a film, she always grabs your attention when she is on screen, and her charm is just so damn charming. If you've never seen her series The United States of Tara, you're definitely missing out (It's on Netflix! Go, go!) In light of her new bold baldness (which she still looks lovely with) Here are some of Collette's best roles of the past (and really, they are all great).

This is the first movie I saw Toni Collette in, and her role as Fiona, the mother of Marcus (one of the titular 'boys') is so heartbreaking. She's a little kooky and she wants to be a good mom, but she's battling her own deep depression. She and Nicholas Hoult, who plays her son, are so natural as a family, and I love Collette's awkward rapport with Will (Hugh Grant).

Controversial opinion, maybe, but I think Toni Collette is the best thing about The Sixth Sense (though of course Bruce Willis is GREAT). I could go on and on, but instead I'll just say two words: CAR SCENE. Tears forever.

Clearly Collette's forte is playing distressed moms. Not that there's anything wrong with that, because she kicks ass at it. In Little Miss Sunshine, Collette plays Sheryl, the closest thing to a pillar of strength and normalcy surrounded by her quirky family. Despite the trials that come with getting Olive to the beauty pageant, Collette loves each of her family members with unequivocal kindness.

The Way, Way Back

Another mom just trying to do her best, Collette's Pam in The Way, Way Back is a little lost, dating an arrogant man with a horrible name, Trent (Steve Carrell) and trying to understand her teenage son, Duncan. She's soft-spoken and seems to accept what comes to her, but her relationship with Duncan helps her gain her own voice.

The United States of Tara

OK, technically, this is AT LEAST four roles. Collette starred in the Showtime series as Tara, a mother with dissociative identity disorder, and her performance was crazy good — especially as Buck, a scummy war vet. This show is totally underrated!