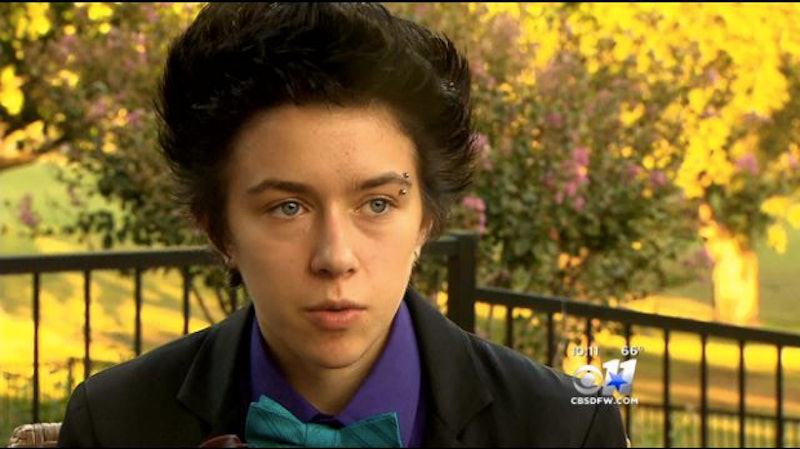 Texas teens are officially giving us more hope than Texas lawmakers: April Swartz-Larson, a 17-year-old lesbian student, was crowned homecoming queen at McKinney High School in McKinney, Texas. Why is this a big deal? To quote the queen herself, "I’m not the typical choice for homecoming queen at all. I’m gay, first of all, and I’m gay...living in McKinney." She accepted the honors in a tuxedo with a purple shirt and turquoise bow tie, with an "I'm Not Screwing Around Here" style pompadour. In short, she looked badass. The way the crowd of students exploded into cheers upon announcement of her winning? The most badass. If you didn't tear up a bit, you're a little dead inside.

When she was announced as homecoming queen, everyone cheered, but people weren't always so accepting of Swartz-Larson. "They were weirded out by it and (for) some of them there was hate behind it", the dark horse said. She recalls, "It was pretty hard when I first came out. Everyone’s kind of grown up a little bit, and they’ve seen I’m the same person."

In fact, her parents were initially concerned by her nomination. Her dad says, "First, I was nervous because I was afraid someone was playing a joke on her." Thankfully, it was not a nightmare Carrie situation. (By the way, I still don't get why all the kids hated Carrie. She had great style. You know, before she was covered in pigs' blood. Aside from that, she was one eyebrow pencil away from being an ANTM contestant.)

I went to a small all-girls high school, so I never experienced the homecoming queen thing, as a participant or otherwise. There are quite a few "big high school moments" that I sort of missed because of this, and yet, even I can appreciate this story. You know how some stories make you weep for humanity? This makes me do the opposite. You go, April Swartz-Larson. And you go, McKinney students.

High fives for everyone involved, especially her friend, Emilee Swim, who nominated Swartz-Larson, because, "she’s the kindest person I know." Here they are posing together before the Big Night:

Swim lead a campaign for her friend that involved colorful fliers posted around the school, and pro-April tweets on Twitter. Many students picked up on the tweets, sometimes adding "#VoteForApril" – the campaign took off from there.

You can follow Swartz-Larson on Twitter, where she asks the very important question: "I made the news, so I can wear my eyebrow ring to school now, right?"