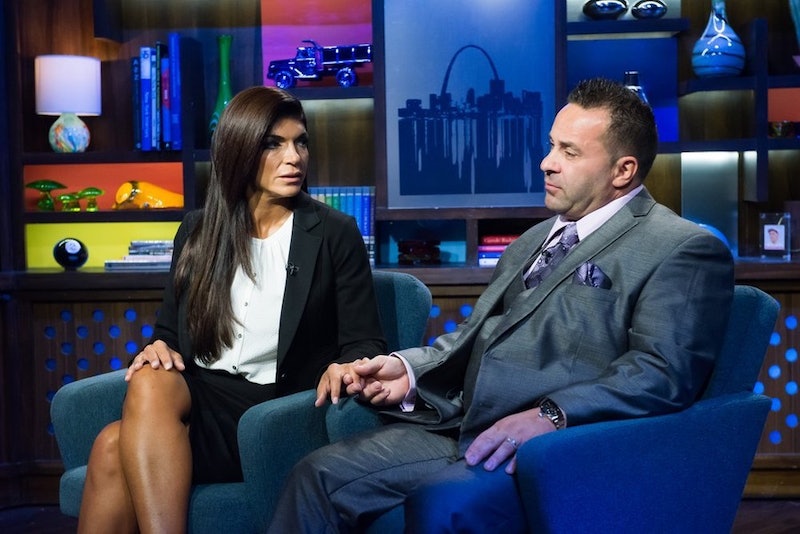 Right now, everyone at Bravo should be thanking their lucky stars for having what must be air-tight contracts with all of the various Real Housewives. In their first interview since being sentenced, Teresa and Joe Giudice appeared on Watch What Happens Live on Monday night to speak with Andy Cohen, in an interview filmed just one day after learning that they will both be going to prison. On Oct. 2, Teresa was sentenced to 15 months in jail and Joe to 41, after pleading guilty to various fraud charges in March. And Cohen was the perfect person to conduct that interview, because while he sympathized with the Giudices and expresses concern for their family, he also wasn't afraid to call them out on their crimes and various behaviors.

Andy also brought up something that must be on all Real Housewives of New Jersey fans' minds: whether Teresa's apparently need for an extravagant lifestyle lead to the fraud the couple committed. They both said it didn't, and in response to Andy bringing up specific RHONJ moments (like Teresa unforgettably saying she could never buy a house someone else has lived in), Teresa said that she didn't really mean it. She also said that she doesn't pay retail price for most of the expensive items that she owns, which lead to Joe talking about the great deal he got on his suit. OK, guys. Thanks for sharing your bargain shopping tips, but we all saw Teresa pay for thousands of dollars of furniture with cash in the first episode of RHONJ. I'm sorry, I truly feel bad for the Giudice family, especially their daughters, but after watching six seasons of their unnecessarily lavish lifestyle, I just don't buy that they were actually living within their means.

Andy also brought up a very interesting quote that Teresa apparently said in the courtroom, "I need to wake up." He asked her if that was her way of admitting that she's been in denial, but Teresa answered by saying that she needs to read documents fully. The only times the Giudices seemed truly sincere during their interview was when they discussed their concerns for their daughters now and moving forward, and when the death of Joe's father was brought up. If one thing is important to the couple, it's clearly their family.

But when it came to the realities of their legal situation and what actually caused their current predicament, it's quite clear that both Joe and Teresa still need to wake up.