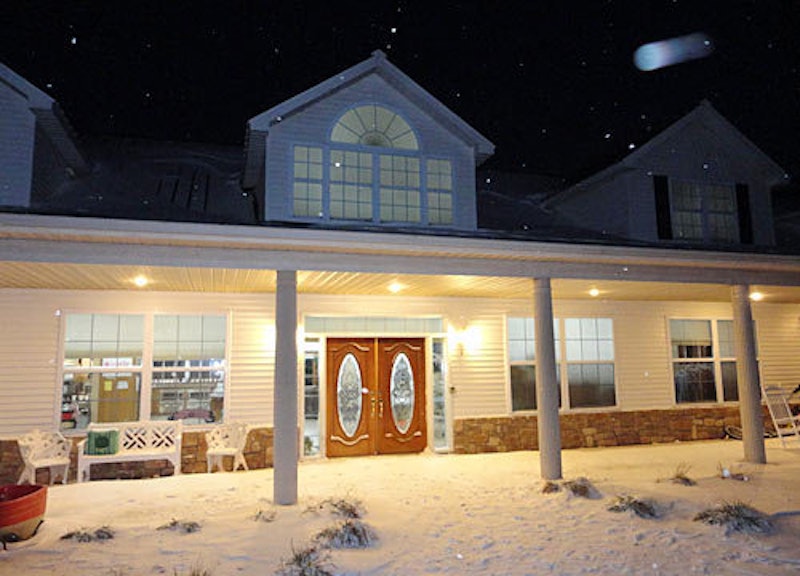 It might seem like a novelty to have 19 kids when you're watching them from a distance — like, on your couch anytime TLC's 19 Kids & Counting is on — but in practice, there are a lot of logistics I can't imagine dealing with. When you have 19 kids, you have to have somewhere for them to live, and for the Duggars, this meant building the 7,000 square foot home in Tontitown, Arkansas that they currently occupy. After all, it's highly unlikely that they could just head out with a realtor and find a home to buy that could accommodate such a big family. They must have been nearly forced into building one themselves, and they definitely seem to be proud of it.

Because when Jim Bob says they built the house themselves, he means it — he and his brood literally built their house, from designing the layout to making the decisions about how many bedrooms and bathrooms there should be to putting up drywall. According to the Duggar family blog, Michelle and Jim Bob bought an $82,000 steel house kit but it ended up being defective, so they got sent another for free and combined what they could use from both kits to create the monstrous compound that stands today. Almost four years later, they had their house!

From what we've seen on 19 Kids & Counting, the house looks pretty nice inside — and if you need a full tour, TLC offers one up on their website. There's plenty of room for kids to play and for the obscene amounts of laundry to get done, but despite the massive square footage, the kids still share bedrooms. We're talking one room for the boys, and one room for the girls, and as many as nine siblings have shared those bedrooms at a time.

So, yeah. Privacy? Not happening in the Duggar family, which would have driven me absolutely nuts as a teenager. No wonder Jill and Jessa seem like they have inhuman amounts of patience. They were never given a choice! And supposedly, this whole bedroom sharing thing was totally by choice. Oh yeah, and they all keep their clothes in one huge, shared closet. This probably makes it way easier for the older ones to help the younger ones get dressed in the morning (and helps out a ton when it comes to putting laundry away), but doesn't it also make it easier for your sisters to take your clothes without asking?

There's also a mail room, tons of inspiring quotes all over the walls, and a list of Duggar household rules that remind the little ones how they're supposed to act at all times.

Duggars: I love to watch them, but I would never, ever want to be one.