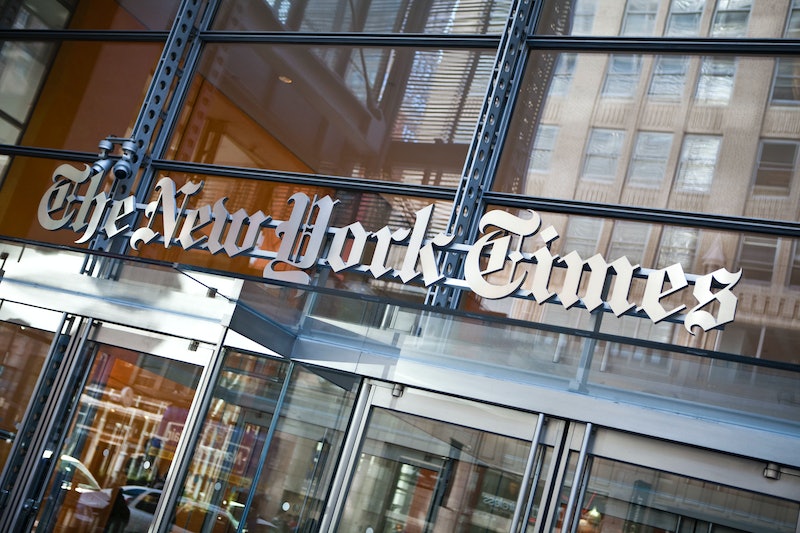 Last week, it was the Boston Herald who gave us our dose of racist newspaper cartoon with President Barack Obama's watermelon-flavored toothpaste. This week, it's The New York Times, because misusing the term "Angry Black Woman" in a Shonda Rhimes profile just wasn't enough. In its international section, The New York Times ran a cartoon depicting India's space program, which just sent a satellite to Mars, as a man and a goat. Yes, really.

India recently joined spacecraft from the United States and Europe in the Mars orbit — a pretty big feat for the country's fledgling space program. India's Mars Orbiter Mission, which arrived at its destination in late September, is the first probe to be sent to the Red Planet.

But instead of, you know, talking about how great it is that there's now a bunch of spacecraft and two land rovers searching for signs of life on Mars, The New York Times cartoonist decided to undermine India's latest accomplishment by highlighting the low-cost of the nation's Mars mission. The cartoon paints India's space program as a poor, scrappy and under-managed institution that is nowhere near the "Elite Space Club."

Who's in the "Elite Space Club?" Presumably, it's Westerners, as the cartoon depicts two older white men in fine tuxedos.

After receiving blowback from angry readers, Andrew Rosenthal, the paper's editorial page editor, posted an apology on The New York Times Facebook page. Rosenthal doesn't directly respond to the allegations of racism from readers, but tries to describe what cartoonist Heng Kim Song was going for:

A large number of readers have complained about a recent editorial cartoon in The International New York Times, about India's foray into space exploration. The intent of the cartoonist, Heng Kim Song, was to highlight how space exploration is no longer the exclusive domain of rich, Western countries. Mr. Heng, who is based in Singapore, uses images and text - often in a provocative way - to make observations about international affairs. We apologize to readers who were offended by the choice of images in this cartoon. Mr. Heng was in no way trying to impugn India, its government or its citizens. We appreciate that readers have shared their feedback, which we welcome.

Rosenthal is right: India's low-cost method of sending a spacecraft to Mars marks a turning point for space exploration. But how does that explain the cow? The traditional garb? And the confused and slightly annoyed faces of the rich white men, whose expressions speak a lot louder than any words could.

The paper's public editor, Margaret Sullivan, has yet to comment on the cartoon. But given TV critic's Alessandra Stanley's recent "Angry Black Woman" faux-pas, and before that, the incendiary "no angel" Michael Brown profile, Sullivan has had some insightful words on how media outlets should better handle race.

Though, as Sullivan pointed out in her "Angry Black Woman" column, it may all start with hiring. "The Times has significant diversity among its high-ranking editors and prominent writers," Sullivan wrote. "But it’s troubling that with 20 critics, not one is black and only two are persons of color."