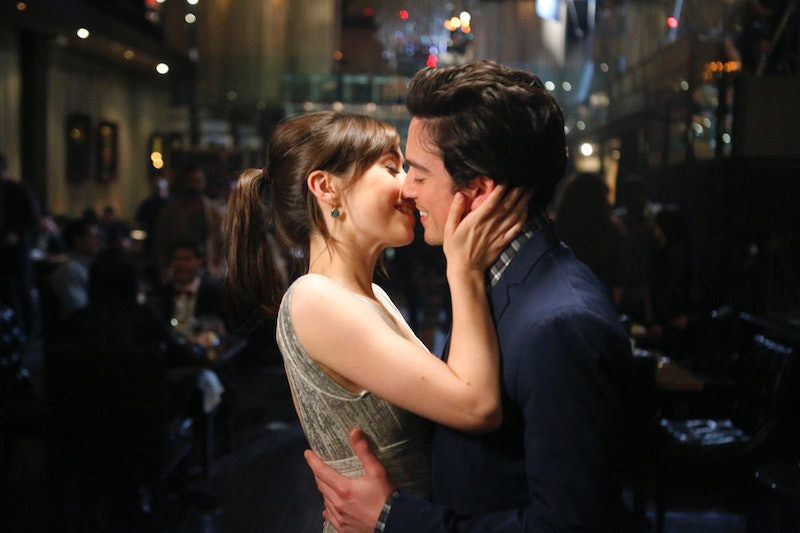 As someone in a long-term, happy relationship, I often get angered by the piss-poor representation of committed people in love on television. NBC's new show A to Z is trying to become the next great TV romantic comedy, so could the show actually make Andrew and Zelda go the distance? Narrator Katey Sagal announced at the beginning of the first episode that Ben Feldman's Andrew and Cristin Milioti's Zelda will date for eight months, three weeks, five days, and one hour. So, what happens after they are done dating? I'm kind of surprised I'm saying this, but I'm pushing for the pair to get engaged and marry.

Although I am a romantic, I'm not the kind of girl who gets all giddy about weddings. And dating for eight months, three weeks, five days, and one hour would not lead to marriage for me (exhibit A: I've been with my live-in boyfriend for close to five years). But Sagal also said in the intro, "Let me tell you about a couple — one of the greats." In my book, a "great" couple should probably be together for longer than eight months. And it would be refreshing to see a strong, loving, and devoted couple grow and remain the center of the show (just think about how awesome Lily and Marshall were in How I Met Your Mother).

Rom-coms are notorious for having couples get together quickly and have a misunderstanding quickly, which leads to a frantic chase scene that ends with a kiss in the rain while declaring their everlasting love — quickly. Maybe I'm expecting too much, but I've always wanted to see past the "happily ever after" part. And although A to Z is definitely a rom-com, I'm hoping creator and writer Ben Queen will tackle the genre with a fresh approach.

Because after a wedding, it isn't just rainbows and doves and all that stuff — real, funny life happens. How great would it be to see Andrew and Zelda enter that part of their relationship (you know, after a couple of seasons) rather than break up? It's something TV audiences haven't really seen as the central plot of a sitcom since Mad About You.

I really enjoyed the chemistry between Milioti and Feldman (if I can ignore the fact that the pair looks eerily similar) and both were immediately likable. As it turns out, the actors themselves don't even know which direction the show is heading in, as Milioti told TVLine, "We did some promo thing where it was me, Feldman, and Ben Queen in the center, and Ben Queen was like, 'What do you guys think happens?' and I was like, 'Well, they break up, obviously,' and then Ben Feldman thinks they get married."

From a logistical standpoint, it makes sense for the couple to last longer than eight months. Although there will be storylines with Andrew and Zelda's sidekicks, the show (as Sagal stated) is "the comprehensive account of their relationship, from A to Z." As we know, shows that are super successful can go on for years, even lasting over 10 seasons. Now, I'm not saying A to Z is the new Friends, but even if it lasts for four seasons, would the show really slow play their entire eight-month-long relationship? The first episode spanned multiple days, so it doesn't seem like that's the direction it will go in.

So that must mean that Queen has an endgame for what happens after the eight months, right? Of course, they could date, break up, and either remain friends or date on and off. But we've seen that throughout the years on TV with a majority of sitcom couples. Why not let the romance continue in a different form rather than fizzle out? Give us a young couple worth rooting for and a little hope for romance too. Lord knows we need it after Milioti's prior TV appearance — the soul-crushingly disappointing finale of How I Met Your Mother.