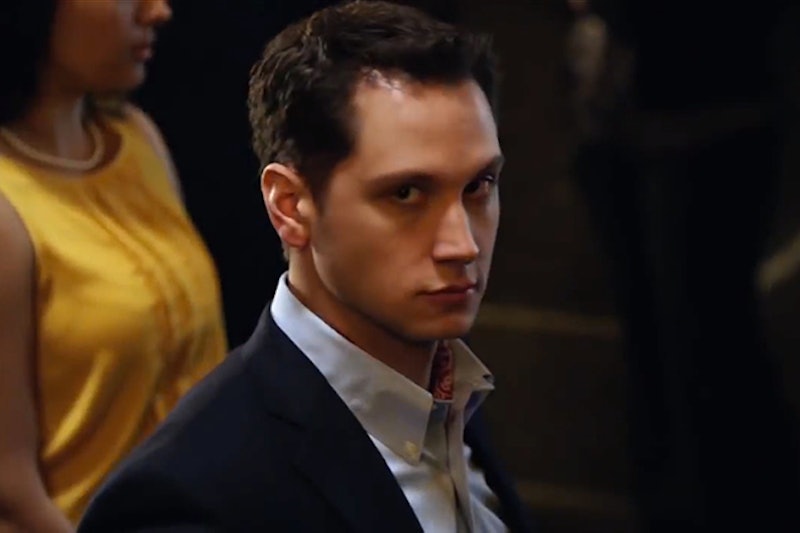 How to Get Away with Murder is just two episodes old, and already it's the only thing I want to watch on television, pretty much all the time. Unfortunately, broadcast doesn't work like that, so we'll all have to wait until ABC's Thursday night Shonda-thon to get our weekly fix. But in the meantime, I still have plenty of thoughts and questions about this intoxicating new show. Like, Where did these grad students all get the money to dress so nice? And Do they ever go to any other classes besides Professor Keating's? But my most pressing question, the one that keeps me re-watching the two hours of HTGAWM we have so far, is this: Where was Matt McGorry's character, Asher Millstone, the night Sam Keating was killed?

If you didn't realize that Asher wasn't with the four other students in all those flash-forwards where they destroy Sam's (Tom Verica) body, it's probably because those scenes are intentionally confusing. No one working on this show wants to give away their big reveal — who killed Sam — too early in the season, so instead, to keep us guessing, the dialogue is filled with vague pronouns that could refer to multiple people. Check out the opening of episode two to see what I mean.

But if Asher wasn't with Wes, Michaela, Connor, and Laurel, where was the preppy law student? At this point, we don't know a whole lot about him. According to his character bio, Asher "was born into a world of Ivy League educations and country club memberships. To his classmates, he’s an entitled, uber-prepared know-it-all, but Annalise knows something about Asher that will surprise the rest of the students—and end up making him a pivotal member of the firm." Well, that's nice and cryptic. There was a mention of his wealthy and powerful father in the most recent episode, but we'll have to wait for later in the season to get a full picture of who Asher is.

We still know enough to start theorizing on his whereabouts the night of the murder, however. HTGAWM showrunner Peter Nowalk gave E! this clue: "I think his involvement will be different than the other four. [He is] definitely interwoven into the fabric of the show." Dammit, Nowalk, give me something I can work with!

Here are three potential reasons Asher was separated from from the rest of the students on the night of Sam's death:

From what we've seen of Asher already, we can deduce that he's used to getting his way, and that he won't let anything stand between him and his goals. He's also willing to get down and dirty, both morally and literally—he had no problem digging through a suspect's trash, remember? Maybe Sam got in his (or Annalise's) way, and Asher took him out. He's not with his classmates destroying Sam's body, because he had to get as far away from the crime scene as possible. Could he be with Annalise somewhere hiding out?

"Doucheface" has connections, remember? His daddy is a big deal. Maybe Asher's not in the woods because he's helping the real killer (Annalise, anyone?) escape via his private plane, or threatening a cop to look the other way. Can't you just see him pulling the "don't you know who I am" card?

In the opening scene of last week's episode, Laurel (Karla Souza) said something that could be a big giveaway: "We're all to blame." Of course, she could just mean the four people destroying the body (plus Rebecca (Katie Findlay) who is also somehow wrapped up in all this). Or, she could have meant that group, plus Asher. Obviously he's involved somehow, so maybe he was just the first one to get caught. That could also explain why the rest of them are so terrified (though the whole "killing someone and burning his corpse" thing might be explanation enough). Asher does not seem like the kind of person to take one for the team, so if he is in police custody, there's not a chance he's not naming names the minute he's asked.

Wherever Asher is, we know he's up to something. What that may be, however, we'll just have to wait and see.