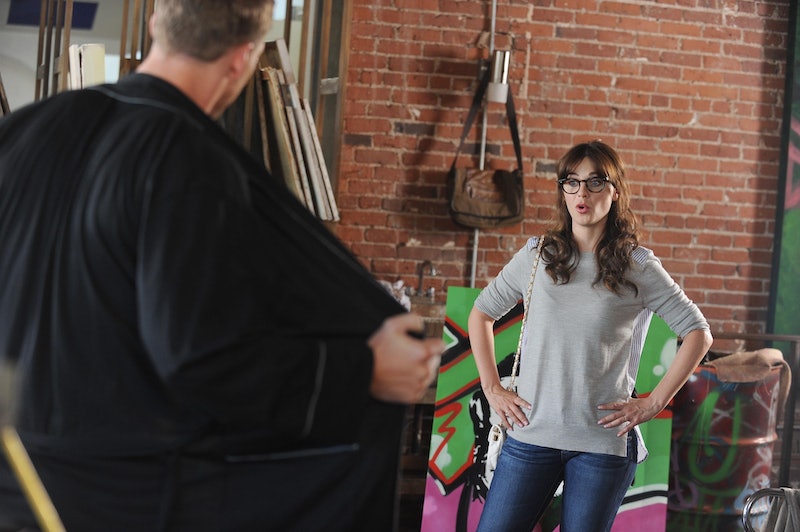 Does size really matter? It’s a question that men have been secretly asking themselves since the dawn of time, and something that Tuesday night’s New Girl episode “Micro” was not afraid to tackle. As previous episodes this season have already made quite clear, Jess is back in the dating game in her attempt to move on from the glorious specimen of a man known as Nick Miller. (Good luck with that, lady.) Which brings us to her latest guy of the week, Matt, played by New Girl guest star Alan Ritchson, who has one teeny tiny p-roblem. (You weren’t entirely sure where I was going with that, were you?) Alright, fine — I can attempt to be a mature adult about this. Matt is somewhat lacking in the genitalia region, which prompts Jess to prove to the gang that she isn’t shallow and could still totally be interested in this guy, no matter his shortcomings.

In fact, she’s so confident in her moral compass that she even makes a bet about it with Nick. If she stays with Matt for an entire month, Nick has to donate $500 to the National Organization for Women’s Love Your Body campaign. But if she can't, Jess has to buy him a subscription to the porn site of his choosing. (And here we thought this romance was dead.) What could go wrong, right? Well… a lot given that the guy’s hotness is pretty much the only appealing thing he had going for him. Turns out he had a girlfriend this whole time, proving once and for all that just because someone has a small penis doesn't mean they can't still be a huge dick.

It’s good to see Jess out expanding her horizons, though — mostly because it presents the show with yet another great opportunity to showcase some awesome guest stars. However, I’m hoping that there’s an eventual endgame here. Not that I expect Jess to find the perfect guy right away, but having all of her prospects blend together doesn’t add up to very memorable moments in the romance department (i.e. Micro Matt). She doesn’t necessarily have to get back together with Nick — though was anyone else picking up on that sexually charged handshake they shared while solidifying the bet?

Regardless, finding a guy who sticks around for more than one episode would be a nice change of pace eventually. And I think Jess is starting to realize this too. Maybe dating all these douchebags will help make her appreciate a good guy all the more. For all we know, we could end up loving a new guy just as much as the core characters. It’s a rare occurrence, mind you, but it’s been known to happen before.

Your Mike Hannigan is out there, Jess. Don't give up hope just yet.