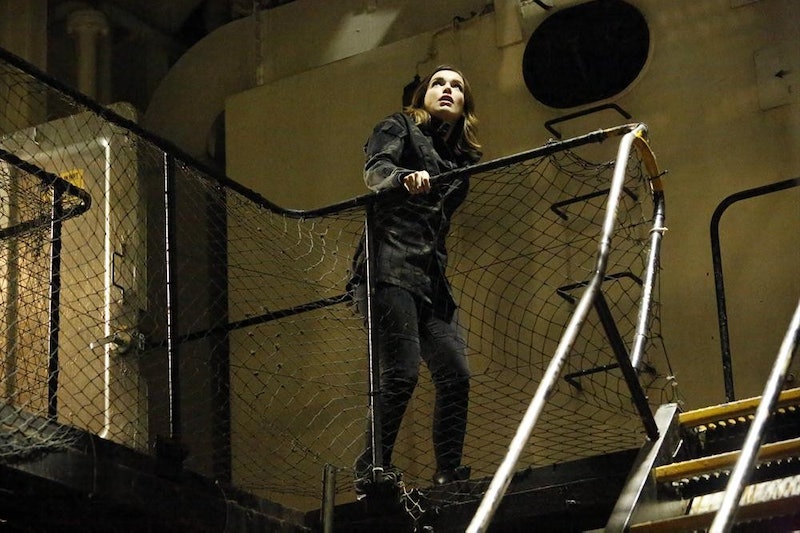 Man, Agents of S.H.I.E.L.D — have you no consideration whatsoever for your fandoms' collective nervous systems? Apparently not: First, they teased us with the fact that Simmons just might be Hydra. Then, in Tuesday night's episode, it quickly became clear that she definitely was. Except... she's not (really). Turns out we were tricked by Agents of S.H.I.E.L.D. and Simmons is deep undercover in Hydra, on assignment from Director Coulson and Agent May — and that, my friends, is what will be the absolute hardest on our nervous systems.

Because now that we know Simmons is undercover, we know just how much danger she's in. Ward spent a good portion of the episode talking about how Hydra's policy is basically shoot first, ask questions later, and now Simmons — Simmons, the worst liar in the universe — is trying to pull a fast one on them?

Skye voiced her concerns on the point, after finding out about her friend's new gig (poor thing got the shock of her life when she encountered Simmons in the sights of her gun). May assured her that Simmons underwent additional training, and it's true — her lying did seem a great sight better than the good old days of stunning Agent Sitwell in lieu of fake-flirting with him. But still, as she moves up the ranks in Hydra (which is happening quickly, especially as she showed her strengths in this episode), her situation grows more and more dangerous. For now, a misstep means — gasp — brainwashing.

Yep, it turns out Hydra can brainwash people using a very scary, yet slightly silly-looking bit of machinery. Ward tells Skye at the end of the episode that it's only done in very special cases, but Simmons is (as we all know) a very special case.

But come on, the Whedon-Tancharoens wouldn't do that to us, would they? Would they?

Crap, they totally would. Guess we'll just have to keep our fingers crossed!