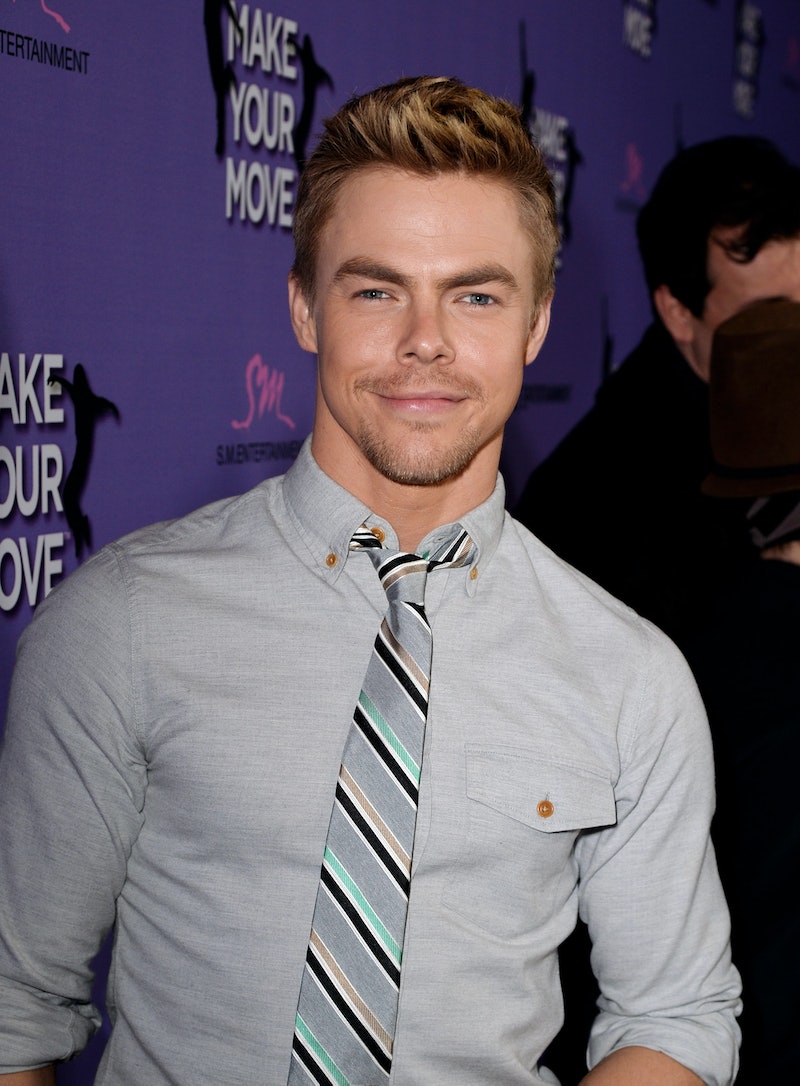 For Juliette Barnes' foray into the wild world of cinema, Nashville has cast Derek Hough to star as the actor playing opposite her (and potential love interest), Noah West. The Dancing With The Stars veteran joins both the series and the Patsy Cline biopic that everyone's been buzzing about. He is one of the only new guest stars that doesn't seem to have his sights on a record deal. In the biopic, Hough's character will be playing Patsy Cline's husband. Neither of Cline's husbands were singers in real life, but I have a feeling the Nashville spin on it will say otherwise, Derek Hough is too much a performer to let his talents go to waste. The real question is: can Derek Hough sing? Short answer — he super can. Though he's best known for DWTS, Derek Hough is also a rock star, a musical theatre performer, and an all-around nice guy. He has just the right amount to twang to make his way in Music City.

What's most interesting to me about this casting is how the real life dynamic goes against the screen dynamic. Unlike Hough, Noah West is a movie star. Unlike Barnes, Hayden Panettiere has been acting on camera since she was a child. It'll be interesting to see the two of them reverse these roles on Nashville. Though somehow, I'm not worried about this being Derek Hough's third screen credit. The ballroom dancer previously guest starred on the late sitcom Better With You and starred in the 2013 dance film Make Your Move. He has numerous stage credits to his name. The common thread in his career? Music.

Plain and simple, Derek sings professionally. He's in a band with friend and fellow DWTS dancer Mark Ballas, appropriately titled the Ballas Hough Band. E! reports that the two go way back, as Derek's sister and another fellow DWTS dancer Julianne lived with Mark's family when they were younger and all three trained as dancers together. Just like a dance and musical fairy tale. The Ballas Hough Band has even toured alongside the DWTS summer tour, and released one studio album in 2009.

Above is a video of Derek as Ren in the 2006 Original West End cast of Footloose. He made his West End debut in 2005 in Chitty Chitty Bang Bang and also starred in the title role of Jesus Christ Superstar. With the exception of Chitty Chitty Bang Bang, these are all rock musicals. This expressive performer's particular musical style will fit splendidly into Nashville.

The Emmy-winning choreographer has had a lucrative musical theatre career on two coasts. He made his Broadway debut in 2010 for the final performances of Burn the Floor. It was more of a ballroom dance showcase extravaganza than a traditional musical, but a Broadway debut is a Broadway debut. It can only lead to more! He may not have the Broadway recognition of Laura Benanti or even Will Chase, but he has proven himself as a triple threat for sure.

Derek has also recorded with his sister, Julianne, who has recorded and released a debut Country album of her own. The two perform together often, as all DWTS fans know. They even toured together this summer. I'm sure I'm not the first person to consider them a real life version of High School Musical's Sharpay and Ryan, what with the performing together and blondness. Derek has also performed with the California Philharmonic, singing and throwing in a little ballroom dance for fun. If you want to keep this Youtube party going, he can play piano as well. The five-time winner of Dancing With The Stars can really do it all.