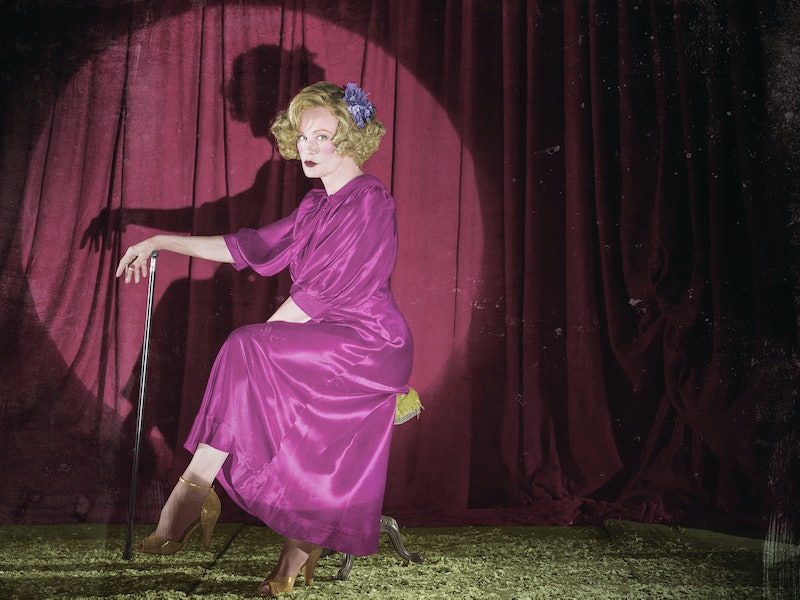 Ghosts, aliens, witches, clowns... Each season of FX's delightfully twisted anthology series American Horror Story has introduced us to a whole new crop of unforgettable (and unforgettably scary) characters, and AHS Season 4, Freak Show looks to be no different. You've got Sarah Paulson as a two-headed woman, Evan Peters as a lobster-clawed man, Kathy Bates as a bearded lady, and more. And of course there's Jessica Lange as Elsa Mars, the German ex-pat who lords over them all. Staunch AHS viewers (masochistic though we may be, with a strong penchant for terror) are eagerly awaiting AHS: Freak Show's premiere episode "Monsters Among Us." Though it's still two weeks away that won't stop us from theorizing, hypothesizing, and conjecturing to our hearts' content.

So what can we learn from the title of the Season 4 debut? "Monsters Among Us" is, on one level, pretty self-explanatory: Elsa's carnival is full of "monsters." They surround "us," meaning average citizens (and the audience). It's reasonable to assume that to the "normal" citizens of 1950s Jupiter, Florida (where the season takes place), a person with two heads or three breasts would be considered an abnormality — and perhaps, in those less-than-politically-correct times, a "monster."

But what if we assume that, instead of the townsfolk, the "Us" in the title refers to the titular freaks themselves? Who among them is the real monster? While most of the physical deformities belie gentle hearts, not all of Elsa's troupe is made up of sugar and spice. AHS newcomer Michael Chiklis (The Shield) plays Dell Toledo, a strongman who used to be married to Bates' character and is the father of Peters'. At the start of the season, he arrives back in town with his new wife, the tri-breasted Desiree DuPree (Angela Bassett). Dell is on the run from the law and quickly usurps his son's position as big man on campus. This sets up plenty of juicy conflict between Dell and his ex-wife, Dell and his son, and Dell and the outside world.

Then there's Paulson's character(s), conjoined twins Bette and Dot Tattler. As you might expect, the sisters — though joined at the hip — are not necessarily both benevolent. Paulson explains in an interview with EW:

It’s not as simple as nice and evil. It’s more complicated in true Ryan Murphy style. One has more darkness in her but not darkness of evil—darkness of depression, of knowing what’s out in the world. The other one is more of an innocent. It’s innocent and more cynical. Even though they share a body, they have different brains and different hearts. They experience everything differently from each one another.

And that darkness is likely to lead to some troubling events: "Yes. Bette and Dot might be responsible for some dark things," Paulson warns.

But the greatest monsters in Freak Show may not even exist within the carnival itself. In fact, the threats that come from outside their ranks will make even the freakiest among them seem as adorable as Tom Thumb. There's Denis O'Hare and Emma Roberts as Stanley and Maggie, two con artists who prey on the freaks. There's Wes Bentley (The Hunger Games) as Edward Mordrake, a real-life legend who committed atrocities at the behest of an evil second face on the back of his skull.

And there's John Carroll Lynch (The Americans) as Twisty The Clown, this year's Big Bad in line with Rubber Man and Bloody Face. Ryan Murphy described the villain, in another EW interview, as "a murderous clown, and he’s furious that the freaks have shown up in a town where he, the most evil clown of all time, has retired and he’s out to make their lives a living hell." Stephen King's Pennywise has got nothing on this guy:

We tried to make him the most terrifying clown of all time. He’s wearing a mask on the lower part of his face and there comes a point in the season where takes the mask off and when you see what’s under the mask you will faint in terror.

So who's the real monster? The freaks? The citizens of Jupiter? Twisty The Clown? We won't find out until "Monsters Among Us" airs on October 8, but knowing Murphy, there's a high likelihood that just about every character on the show, even the most pleasant-seeming, will turn out to have a little bit of monster inside them.