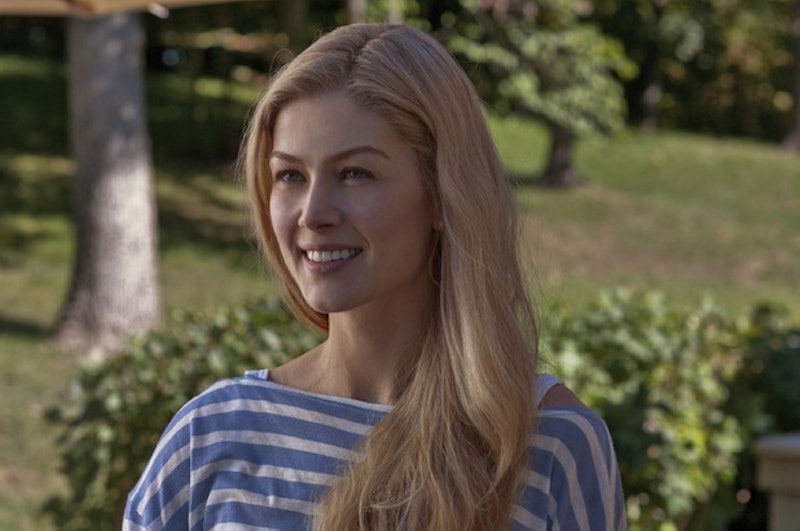 Women of America: Are you suffering from the crippling affliction known as "cool girl" syndrome? Do you enjoy beer, hot dogs, dirty jokes, casual sex, casual romantic relationships, and/or approaching life with a relaxed and laid-back attitude? Well, I have some sad and difficult news to report to you: You are a filthy, filthy liar, you don't actually like any of that stuff, and you're just pretending you do to please men. Don't shoot the messenger here — I'm merely reporting what I've been hearing on the Internet all week, as I've sifted through the innumerable essays that the release of Gone Girl hath wrought. (SPOILERS BELOW!)

That movie (and the mystery novel by Gillian Flynn that it is based on) offers a near-bottomless supply of pop cultural think-piece fodder: From its commentary on the media circus that pops up every time a white woman goes missing, to its strangely empathetic examination of a character who fakes her own assault and kidnapping, nearly every page is full of button-pushing material that could keep bloggers busy until Oscar season. But somehow, a surprising bulk of the pieces on the film's release have bypassed commenting on its more genuinely controversial elements, and instead have given an approving nod to its take on an alleged cultural menace known as the "cool girl."

For those of you who've been lucky enough to avoid the whole mess until now, here's the passage that birthed a wave of trend pieces, in all its supposed glory:

Men always say that as the defining compliment, don't they? She's a cool girl. Being the Cool Girl means I am a hot, brilliant, funny woman who adores football, poker, dirty jokes, and burping, who plays video games, drinks cheap beer, loves threesomes and anal sex, and jams hot dogs and hamburgers into her mouth like she's hosting the world's biggest culinary gang bang while somehow maintaining a size 2, because Cool Girls are above all hot. Hot and understanding. Cool Girls never get angry; they only smile in a chagrined, loving manner and let their men do whatever they want. Go ahead, shit on me, I don't mind, I'm the Cool Girl.

Let's put aside the fact that this passage harshly interrupts the flow of a tightly-plotted mystery novel to basically just rag on Cameron Diaz. Let's also put aside the bizarre detail that, in everyone's rush to finger-point at the "cool girl," we all seem to be forgetting that this passage is an interior monologue spoken by a homicidal maniac, and thus is perhaps not something on which to build your own personal life philosophy. The thrust of this passage, and the collective opinion of the Internet, seems to be that women like this don't actually exist — that if women behave like one of the guys then they are putting on an act, fooling themselves in the process, and ultimately playing the tomboy card in order to win the affections of men.

But let's get one thing straight: Farty, funny, beer-drinking, emotionally guarded, sexually adventurous and generally relaxed adult women do exist. They're not an anti-feminist plot created to make women fake and weak; they're not a personal assault on more classically "ladylike" chicks; they're not a long con on the woman's part to lock down a man and fill her womb with his seed via trickery; and most importantly, fighting against the "chick who can hang" (as Amy Schumer calls it) doesn't make you a righteous cultural warrior — it makes you a person who is very invested in having all women conform to a pretty specific set of cultural behaviors.

Nearly 10 years after the rise of Sarah Silverman, you wouldn't think we'd still have to be arguing about whether a woman who is acting raunchy is putting on an act.

And yet, somehow, here we are, staring down a piece on Jezebel titled "The 'Cool Girl' Is Not a Fiction, But a Phase," which alleges that

"[l]iking beers, hot dogs, sports, partying, and having a general allergy to feelings or Anything Too Serious is not the province of straight men in reality...[b]ut generally speaking, it is the cultural province and conditioning of straight men. These are the criteria for general dudeness, and by acknowledging this we must also acknowledge the criteria for general ladyness, which is typically thought of as a softer, gentler, more feelings-driven creature who is less reflexively impressed by violence, poor manners, pranks, booze as a lifestyle, and meat products."

The piece then goes on to tie the rejection of said markers of "ladyness" with "pretending you don't have any feelings or long-term goals to be desirable to a certain breed of dude."

It's a strange jump in logic, but one you see in almost every piece addressing the phenomenon. In BuzzFeed's piece from this past February, "Jennifer Lawrence and the History of Cool Girls," we're told that farty, Dorito-eating Lawrence is not like us because she "has a stunningly beautiful face and an equally fantastic body," which apparently turns all her farting and Dorito-eating into a manipulative performance:

She’s subconsciously figured out what makes people like her, and she’s using it. But is this persona truly “cool,” or is it a reflection of society’s unreasonable and contradictory expectations of women?

In The Telegraph's piece, "Men: The Cool Girl Doesn’t Exist, So Stop Looking for Her," we learned that "cool girl" also engages in behaviors like:

pretending to like the same things as a guy, being unfailingly patient, never complaining – 'Oh, you’re an hour late and I’m waiting outside your house and it just started hailing? No problem babe! I’ll just chill out on the curb!'

Even Flynn herself seems to be reading things into the "cool girl"'s behavior that require great jumps from the parameters that she herself set up, telling Vulture about the "cool girl's" genesis:

Yes, we can all agree that putting up with machismo bullshit is terrible and heart-destroying and something that our sexist society requests of women over and over. But riddle me this: What the hell does it have to do with eating Doritos and liking sports?

In the same interview, Flynn all but comes out and admits that the "cool girl" rant was directly inspired by There's Something About Mary-era Cameron Diaz — a character who, yes, loves fattening foods and sports, but where does she take shit from men, or smile beatifically upon their bad behavior? Diaz's Mary doesn't suffer bullshit gladly. She's the farthest thing from a doormat — that's why women liked that movie, too. That's why I, a real live woman, liked that movie. I didn't think Mary was cool because she was bullshitting men so that they would like her — I thought she seemed cool because she was smart and funny and got to be herself without paying the price in sexual desirability. As a teenager, who definitely paid a price in desirability while being my farty, prank-loving self, I liked Mary because she seemed like she wasn't getting punished for being different.

Which is where the "cool girl" critiques get their wires crossed: Just because you look at "Mary," or Jennifer Lawrence or Olivia Wilde, and see a toady for the patriarchy doesn't mean that every other woman does. Some of us look at Jennifer Lawrence while we ourselves fart and eat Doritos and feel not crushing pressure to conform, but relief from the crushing pressure to conform.

In their hearts, all these pieces critiquing the "cool girl" are actually critiquing a very real problem: a cruel, sexist society that encourages women to lie about who they are, what they like, and what they want in order to seem more sexually appealing, rather than be honest and risk not "landing a man." Lying about who you are is a psychological horror that women are expected to endure as just part of the dating process, and we're right to finally be devoting some ink to talking about how pernicious it is. But why do we assume that these "cool girls" are lying? How the hell do we know if Jennifer Lawrence takes men's shit? For that matter, how the hell do we know that any "cool girl" we see slamming picklebacks at the bar takes men's shit? Isn't part of hanging with the guys the ability to give them shit right back when they tease you as they might their male friends? The "cool girls" I know are anything but doormats and pushovers.

Here's the catch: In critiquing these behaviors (and assuming, with zero evidence, that they are merely a facade), said critiques end up performing exactly the same sexism they claim to be taking a shot at. In aiming to free some women from the pressure of feeling obligated to act in a certain way, they tar wholesale another group of women, a group of women whose motives and impulses they can only guess at simply because being laid-back and burping the alphabet seems like it must be a fake, man-pleasing behavior.

Which is another thing that the "cool girl" critiques seem to get twisted: As any farty, funny, beer-loving girl can tell you, being raunchy does not help you get a date. If it's a dating long con, it's a terrible one. One doesn't even need to point to the fact that the Patron Saints of Cool Girl, Sarah Silverman and Cameron Diaz, remain unmarried into their 40s to make this case. I can tell you from my own personal experience (which is really all that any of these pieces are going on) that being a funny, loud, beer-swilling, shit-talking woman scares most men to death.

The most vicious trick of sexism in our culture is that it makes women feel inadequate and then urges them to take it out on other women. And because we're raised in a sexist society, none of us are immune — we all have moments of seeing another woman, deciding that she has an easier life than us, and then deciding that she must have a wretched personality. It's a middle school habit that often persists through the rest of our lives.

But we're not in middle school anymore. We're old enough now to fight it. The "cool girl" is just the latest version of the "manic pixie dream girl" — a socially sanctioned way to gang up against and rag on a certain type of woman, while falsely claiming that we're somehow doing it for the overall good of womankind. We as a culture got tired of the MPDG and moved on, and we'll get tired of the "cool girl" and move on from her, too, eventually pointing fingers at a different group of women, claiming that they are the real fakers and liars, the ones rewriting their entire personalities just to curry male favor. We'll do that instead of admitting that other women aren't the ones hurting us with their behavior; the world is hurting us by conditioning us to so easily assume that other women are living a lie when their behavior doesn't fit in certain boxes.

That's the real problem. And it's a problem that has everything to do with sexism, and frankly, nothing to do with loving corn dogs, threesomes, or short-sheeting the bed.Now, if you'll excuse me, I have some Doritos that I need to fart on before my big date tonight. Images: Jersey Films/ Universal Pictures, Giphy (5)

More like this
25 Inspiring Quotes From Black Women To Celebrate Black History Month
By Kyli Rodriguez-Cayro and JR Thorpe
Twitter Is Identifying With Sally Field & Jane Fonda’s Friendship In New Viral Video
By Jake Viswanath
24 History-Making Black Women You Probably Didn't Learn About In School
By Ayana Lage and JR Thorpe
Andie From 'How To Lose A Guy In 10 Days' Is A Total Gemini
By Nina Kahn
Get Even More From Bustle — Sign Up For The Newsletter
From hair trends to relationship advice, our daily newsletter has everything you need to sound like a person who’s on TikTok, even if you aren’t.