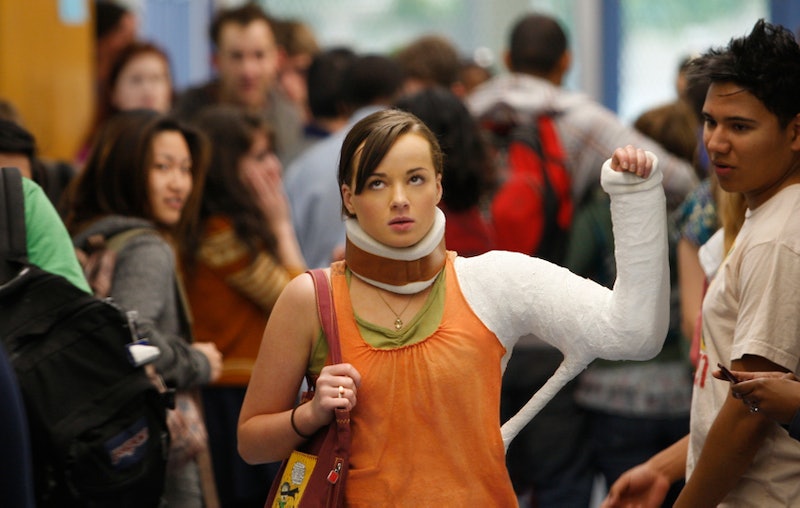 It's official: MTV's high school sitcom Awkward has been renewed for a fifth and final season. We're in the latter half of the show's fourth season as we speak, with the characters gearing up at the top of the slide into high school graduation, which leaves approximately a season and a half until we say goodbye to these characters forever, barring any last-minute spin-off prospects. So how will Awkward end?*

Where we stand now, most things remain up in the air: We pretty much know where Tamara's going to college since she's been admitted to SCU, but Jenna was rejected, so who knows where her future lies; Matty's getting over that whole "psycho ex" thing and is being vague about his post-high school plans; Jenna and Matty are continuing their constant will-they-won't-they friendship/romance ... But where will they all be in a season and a half?

It seems like it's too late for Awkward to recalibrate its fourth season timeline to compensate for a fifth season pickup — aka it's thankfully too late for them to drag high school out indefinitely out of fear or moving forward. What that leaves us with is an unsure timeline for the final season. TVLine has reported that showrunners Mike Chessler and Chris Alberghini have said Season 4 will end with spring break and not graduation, so we've got a couple of hints at what the timeline could look like. Will they fast-forward, or will they stay put? The options that first come to mind for this last hurrah include but are not limited to:

I'm personally partial to the first and last options, with my ideal final season being some sort of mashup between the two. I can't predict whether the show will go full Matty/Jenna OTP or go the more realistic route of having them be on-again/off-again friends for a whole lot longer; I can't predict what kind of major corporation or small country Sadie or Tamara will on day rule over; I can't predict what direction they even want to point Jake in.

But what I can predict is that there will be a whole lot more drama coming our way soon enough — and that with an end in sight, that drama might stand a chance at being more focused than ever.

*UPDATE: This post was initially written before it came to our attention that Season 4 would end with spring break. It's now been edited to reflect that information.