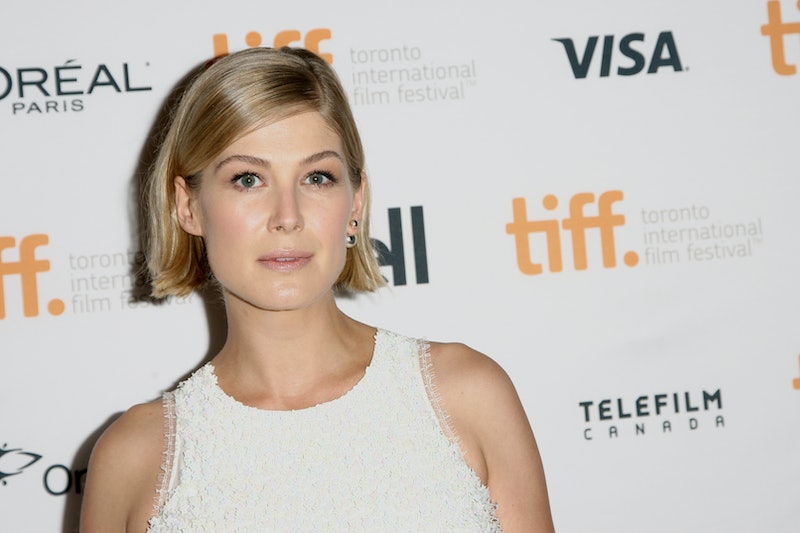 The coolest anti-cool girl, Rosamund Pike talked with Vulture about the transformation of Amy in David Fincher's Gone Girl: "I had to gain and lose weight for those scenes three times over! I had to be slimmer in L.A. and heavier in the Ozarks, and then heavier and slimmer in the studio, so I had to do it three times over. They scheduled around it, so I had two weeks each time for each fluctuation. It was quite intense. It was like turning your body into a chemistry lab, and I couldn't escape it, the weight-loss period." For those who have seen the film already, you know that Amy fluctuates drastically in appearance throughout, so Pike's extreme weight gain and loss makes sense; but it's curious that she would have to lose and gain the weight so many times over, rather than filming each set of scenes all in one go.

Still, nowhere in the interview does Pike complain; rather, she speaks of her dedication to the task, and it's that same dedication that made her such a perfect fit for the role of Amy. When stars lose and gain weight dramatically for film roles, we're always fascinated, not only to see how they are physically transformed, but because we think, Could my body do that too? And the answer is: It probably could, but it really shouldn't.

More recent memorable performances by stars who have dramatically altered their bodies include Jared Leto and Matthew McConaughey in Dallas Buyers Club and Anne Hathaway as Fantine in Les Miserables. Though obviously these famouses show us what the human body can THEORETICALLY do, it's not at all realistic to use these actors' transformations as a motivation for ones own weight loss or gain.

Losing or gaining 20 pounds in two weeks is damn near insane. Even for film roles, it's extreme, but actors have managed conditions and people to help them along the way at a controlled pace. I know we want to see ourselves as the same as celebrities on many levels, but trying to emulate such extreme, unhealthy body changes shouldn't be one of them. Chalk it up to one of the worse parts of the profession, marvel at how different Christian Bale looks in Batman and the Machinist, but please don't apply those weight gain/loss goals to yourselves.