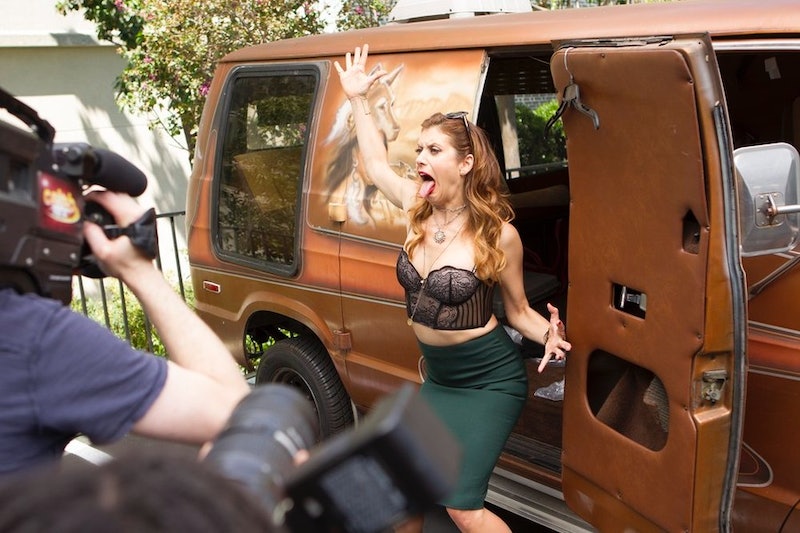 Out of all the rocky pilots so far this season, I feel a weird sense of affection for NBC's Bad Judge. I can't stand the idea of NBC coming out of this year with no comedies, especially since Parks and Recreation is about to end. So I'm hoping they can pull Bad Judge into a success, because Kate Walsh's Bad Judge antiheroine Rebecca Wright is a great reversal of the usually male eternal adolescent comedy characters. But there's one problem: she's the only woman in the show's world. Yes, the background characters are populated with a few women, but every name character besides Rebecca Wright is a man. No Judd Apatow or Adam McKay movie is complete without a posse of similarly immature friends. So where are Rebecca's?

Turns out, she did have a best friend, but she was cut out. The show underwent drastic cutting and recasting between the initial pilot and what aired. In the original pilot of Bad Judge , Rebecca was trying to balance not just the various demands of her job, but also trying to figure out how to reconcile it with her busy personal life. They've edited that down to just wearing body con dresses to work and driving a van from the late '70s. I mean, in no way does "caring too much" about a troubled foster care kid make your main character edgier. Or, more troublingly, funnier. Playing in a two-woman band called "Ladycock" also isn't that funny or edgy, but it's less maudlin than throwing a kid into the mix.

And by incorporating Rebecca's sex life into her work life, it really makes the show feel like it's about a workaholic judge (with questionable fashion sense) who has nothing going on in her life besides work, not a woman who's struggling to avoid losing her former edge while working in a stuffy profession. She needs something to ground that personal side of the story, to provide some tension. In this original trailer from before the reworked pilot, Arden Myrin's character gets a small bit in the beginning. It's not the best comedy beat in the world, but it's different than Rebecca's interactions with every other character. She gets to be (nominally) the responsible one.

Some of the changes make sense. Tone Bell and Ryan Hansen are very talented and funny both in general and on the show, so adding more to their characters was a good idea, even if in the pilot that meant shoehorning them in at odd times. But making them two of Walsh's supporting players? Great idea. But instead of two more male work acquaintances, the next billed star of the show should have been Arden Myrin. Like Hansen and Bell, Myrin has done a lot of work — she spent years on MadTV and often appeared on Chelsea Lately — but still has yet to really break out. She's a lot younger than Walsh, but that plays to Rebecca's arrested development; she would have a best friend 10 years her junior.

With the addition of Myrin, Rebecca would be caught between her social life, living like a frat boy, and the expectations of what a judge should be like. Walsh would've had more comedic notes to play, and most importantly, there would have been more than one woman on this TV show. Cutting Myrin from the series was clearly a huge mistake.