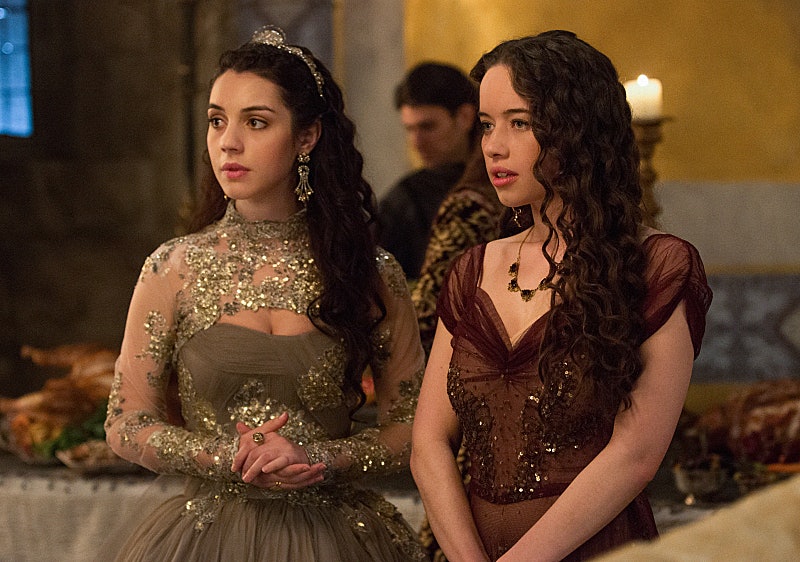 What is royal life if not full of love triangles? Ask the royals of Reign because it looks like we're going to be saying what up to a new royal love triangle in Season 2 of Reign. The possibility of a Lola-Francis-Mary lust fest has been set in motion by the birth of the new King of France's illegitimate heir. Now let's be clear, Francis and Lola haven't done the nasty since the little baby love child was conceived but, to be frank, there's nothing that brings a couple together more than sharing a person they made together. My question is, with Julian/Remi out of the picture for now, and Francis and Mary's marriage constantly off-balance, will Lola become Francis' mistress?

In the Season 2 premiere episode, "The Plague," Francis had rushed off to Lola's aid and the baby was born. But, let's be honest, there was no attraction between Lola and Francis. There was, however, definite tension between Francis and Mary when he left for Lola in the Season 1 finale. And by the end of "The Plague," Francis had already decided that the baby and Lola would join him to live in the castle. Seems like it would cause a spat of drama doesn't it? We're thinking the same thing. Thanks a lot, adorable baby. Francis has got on his Daddy Eyes and now it's a problem for everyone.

Speaking of your wife, let's talk about her. Francis may not think too fondly of her now that's she's gone a little, "Bow down, bitches," back in France. I'm concerned this new ego-trip may have an effect on their relationship. I'm not saying two powerful people can't have a working marriage. I'm saying that Mary is getting more and more territorial with each scene and it seems it could be a serious strain on the royal marriage. Adding an illegitimate child to the mix is not exactly promising.

Take that theory and add it to this: what ever happened to Remy/Lord Julian? Is he coming back? If not, don't you think Lola is going to get a little lonely? I'm wondering if her interactions with Francis may change from parenting to partying...the naked kind that would upset Mary. If Lola is living under the same roof as Francis and the two of them are not getting what they want from their partner/don't have a partner, wouldn't it make logical sense that they turn to one another for comfort, especially since they're already sharing a child? Let's face it, in the Reign world, all things that can go wrong will go wrong. Lola spending a couple nights in the King's chambers isn't exactly hard to believe. I've got a hunch that Lola just might be the new King's mistress whether it happen on purpose or by happenstance.