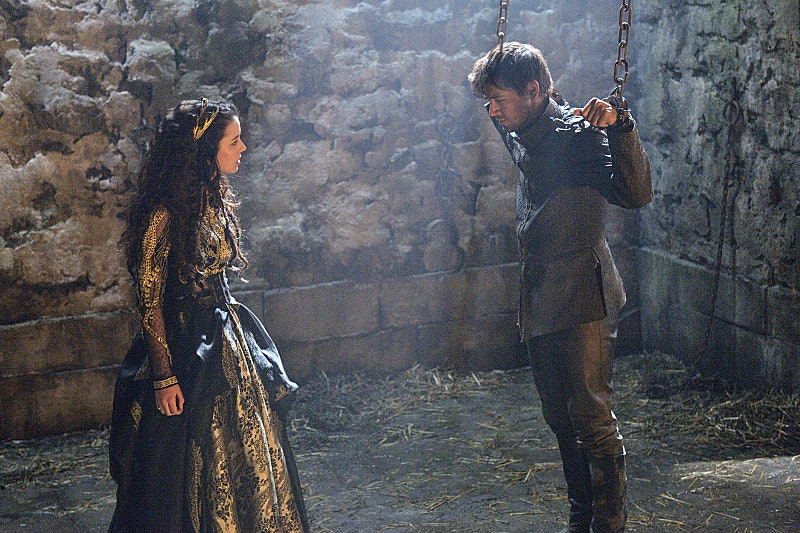 I had no idea what to expect when Reign Season 1 first premiered last fall. All I knew was that it involved alliances between France and Scotland, another love triangle involving two brothers (a trend The CW seems to love), and historically inaccurate wardrobes that are just gorgeous enough to get away with it. But regardless, I was more than willing to give it a shot. (TBH, Reign had me at “love triangle.") And as the season progressed, so did my love for the show. Mary Queen of Scots arrived at French court with the intention of marrying King Henry’s son, Francis, as a way to fully secure France’s alliance with Scotland. And surprise, surprise! — they’re both super attractive and totally into each other. What could possibly go wrong, right? Well… apparently almost everything.

Mere moments after Mary arrives, Francis’ mother, Queen Catherine, is made aware of a prophecy that foretells that this union with Mary will cost Francis his life. (An awkward thing to learn about your newly arrived houseguest.) Obviously, this news was bound to cause some problems, and by "problems" I mean Catherine doing everything in her power to stop this marriage from happening. (I guess mother-in-laws were an issue even way back then.) But Mary proved to be much more resilient than Catherine could’ve ever predicted, which led to a host of events even Nostradamus couldn’t have foreseen. Like what, you may ask? Let’s take a look back at some of Season 1’s biggest plot developments to help prepare us for Reign ’s Season 2 premiere. From what I gather, it’s going to be a royal affair.

Though Francis was a bit hesitant to commit to Mary at first, he eventually grows to love her, making Catherine all the more desperate to end things. And she decides that the best way to go about doing that is to use Mary’s feelings for Francis to her advantage. She eventually informs Mary about Nostradamus’ vision, and though she's hesitant to believe it at first, when he correctly predicts the death of one of her ladies-in-waiting, she suddenly has a change of heart.

Mary then makes every attempt to push Francis away, even going so far as to suggest the legitimization of his half-brother, Bash, so she could marry him instead. (I know she did this to protect Francis and everything, but that plan was definitely way harsh, no?)

Heartbroken, Francis heads to Paris to try and drink his sorrows away. And whom should he happen to run into there, but one of Mary’s ladies, Lola. So naturally, the two of them end up sleeping together. Meanwhile, arrangements for Mary and Bash’s wedding continue to get underway, which means it’s a perfect time for Nostradamus to have another vision — this time with Mary and Francis looking happy. He immediately informs Catherine of this new development, which she passes on to Francis and Mary. Before you know it, the two of them are not only reconciled, but married as well! (Poor Bash.)

However, there are a few little hiccups in this happily ever after. Nostradamus sees the new vision again (in its entirety this time), which shows Francis dying one year into the marriage. (Uh oh!) Meanwhile, Mary — who is having a hard time conceiving — finds out that Lola is pregnant… with Francis’ child. And though she’s definitely angry, she offers her assistance and vows to keep the secret from her husband.

After accidentally flinging a lover out of the window during sex (and yes, I know how ridiculous that sounds), King Henry starts to go a little mad — even seeing guilt-ridden visions of his dead brother. He becomes violent and is obsessed with taking over the English crown, regardless of the casualties. In the end, Francis kills Henry during a jousting match in order to save the country from his father’s madness, and therefore making him the new King of France. On the plus side, before Henry’s death he forced Bash and Kenna to get married, who have turned into quite the adorable couple. So there’s that.

A Plague On Both Your Houses

Tired of the pagans and their practice of human sacrifice, Bash ventures into the Blood Wood to track down a creature called The Darkness — the one apparently responsible for all of this. It turns out The Darkness is a man, who warns Bash that the blood sacrifices are necessary to appease the gods and keep the plague away. Believing him to be a liar, Bash kills the man, and sure enough — the plague descends.

At the same time, miles away from the castle, Lola goes into labor. (When it rains, it pours, right?) She manages to get a message to Mary regarding her whereabouts, which forces her to come clean to Francis about Lola’s pregnancy. Mary pleads with him not to leave the castle for fear of the plague, but he insists on going to rescue Lola and his child. As he leaves the grounds, Mary solemnly tells the guards to close the gates.