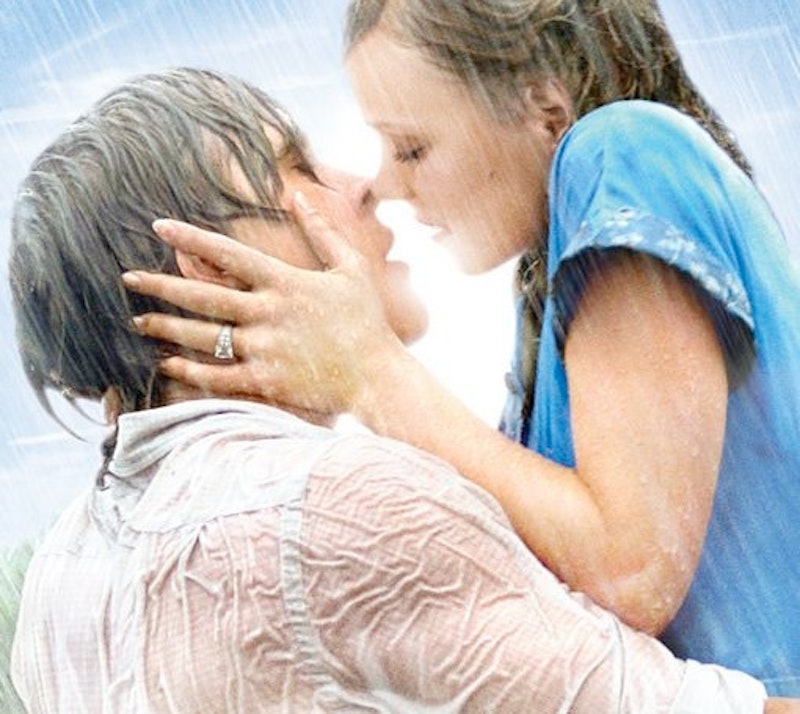 The next Nicholas Sparks movie is on its way to theaters and you might have found yourself seeing one or two or a thousand trailers for The Best of Me. Starring James Marsden and Michelle Monaghan as the latest Soulmate Couple, it's about a couple who started dating when they were young, but circumstances of the time period and other outside forces tore them apart until they meet again years later and rekindle their relationship because theirs is a love that can never die. Wait a minute. That also sounds like the plot of The Notebook. Could it be that The Best of Me and The Notebook are actually just the same movie? Sure, all Nicholas Sparks films generally follow a formula, but The Best of Me might be giving The Notebook fans some serious déjà vu.

But that can't be true. I mean, The Notebook's official IMDB summary describes it as, "a poor and passionate young man falls in love with a rich young woman and gives her a sense of freedom. They soon are separated by their social differences" while The Best of Me's official IMDB summary describes it as, "a pair of former high school sweethearts reunite after many years when they return to visit their small hometown". That's totally different. Noah and Allie weren't in high school when they met! And social differences! And that ending!

To settle this debate once and for all, I examined The Notebook's trailer from 2004 against The Best of Me's trailer from 2014. And I'm sorry to be the one to tell you this, but you're about to pay money to watch the same movie twice. Here are nine specific scenes/shots the two films have in common.

The Notebook's was so emotionally charged that they put it on the poster. Come on now.

2. Diving into Lakes for Fun

Technically in The Notebook's trailer, Allie does it twice.

3. So Many Fancy Lawn Parties

How would we ever know Allie and Amanda are well-to-do if there weren't any fancy lawn parties?

Apparently, both Allie and Amanda attack Noah and Dawson respectively for falling out of touch with them over the years. The circumstances might be different, but the anger is the same.

5. It's not real dancing without a good twirl

I guess no trailer is complete without a scene of a couple dancing shown right as the man twirls the female?

Did the casting call for Young Dawson literally just read "Must look like a young Ryan Gosling" or...?

Even when Young Dawson grows up to be James Marsden, he's still rocking the years-have-passed-and-now-I-have-facial-hair look that Noah had after the time skip in The Notebook.

Is it the same red blanket? Is the red blanket the unspoken star of Nicholas Sparks movies? Does it symbolize something? What goes on here?

9. You must dip her to kiss her

No exceptions. To be fair, it's probably the only way to overcome that adorable height difference, but, at the same time, it doesn't help with my déjà vu. The jury has spoken: The Best of Me and The Notebook are basically the same movie. Nice try, Nicholas Sparks, but we're on to you.

Check out the trailers below and decide for yourselves.