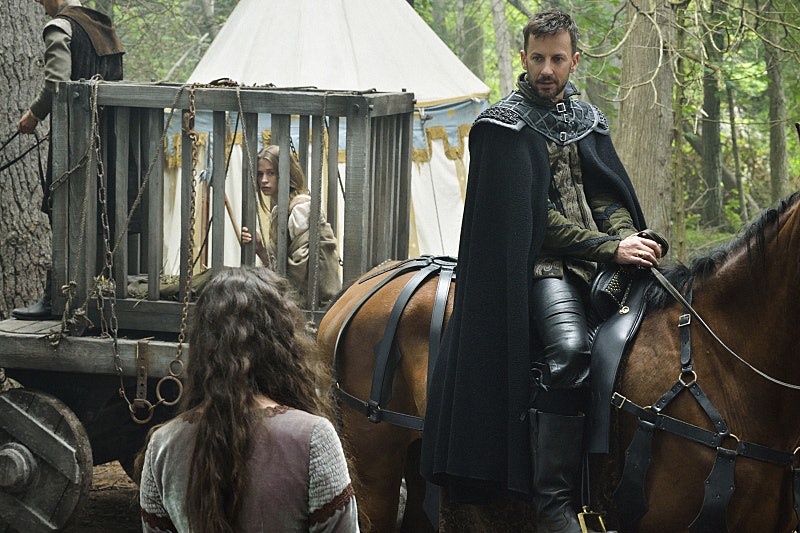 Alright, we all know that the CW's Reign isn't exactly a field of accuracy. Every time I look at Mary and her Ladies' wardrobe, I'm all, "Pray-tell, what pre-Industrial Revolution black magic put together those seams you wear?" The same thought process goes for the Plague that ravaged the country in the Season 2 premiere episode. Clearly it can't be that easy to dodge the plague. That being said, you can't blame the Reign writers. Let's keep in mind the Reign brand isn't about keeping dramaturgy sexy, it's about sex and the ruthlessly power hungry.

"It's like historical fan-fiction," as Anna Popplewell, who plays Lola in the show, once said in an interview with Hollywood Life . "We've created a new world; it's fantasy history." Indeed. My goal is to find out just how similar and different this fantastical history world is to the real world, especially when it comes to the Black Death.

The Plague is and has never been sexy. Reign definitely got that part right. With boils and blackening fingers, the victims of Season 2's premiere episode died gross and bloodied. But, rest assured, this disease was not brought on by unhappy pagan gods as Bash was told in Season 1. At least not, IRL. So no worries, Bash. The reason for this epidemic is surely not because the darkness needed a new blood-sucking sacrifice collector. Think smaller. According to the History Channel , the plague came from rats and fleas...again, not sexy. The bacillus from the rats was called Yersina pestis. That's a lot less intriguing than angered blood-lusty pagan gods, huh?

Turns out, the Black Death was spread to humans through fleas that had bitten infected rats and then vomited the infected blood into the humans they fed on. Disgusting? Yeah, pretty much. But, hey, what isn't in the Middle Ages. Don't believe me? Check out this video that explains how serious the plague really was. The Black Death was not a drill.

Not cute. Also, remember when Kenna was all, "I guess I'll just lean all up against this door while the infected Pascal dies on the other side. No worries, I'm a principle character in this show, I won't die a horrible plague-y death." Yeah, that wouldn't've happened. Girl, may have survived the crazy of King Henry but definitely not the wrath of, well, you know, the plague. This is not the common cold Kenna, get the freak away.

Why would Kenna have died? Well, because the plague was spread commonly through the bites of fleas and it was also pneumonic, which means it was air-borne. One cough from Pascal and Kenna ran a very high risk of infection.

Also, remember when Bash killed that one infected girl and ended up totally not infected...that was a joke, right? Because according to National Geographic , coming in contact with "plague-infected body matter" i.e. the blood of the plagued woman you just stabbed, would indeed get you infected. Not to mention, I can't imagine the sterilization procedures back then were too strong. If Bash were able to immediately clean the blood from his hand, I doubt it would do any real saving. In reality, medically, he should have pulled a Catherine and been all...

But let's be real, we don't watch Reign as a substitute for History class. We watch for Francis' hair, Kenna's fashion sense and twist-turned drama that is French court. Bring on the historical fiction, Reign. We love it whether they're lies or not.