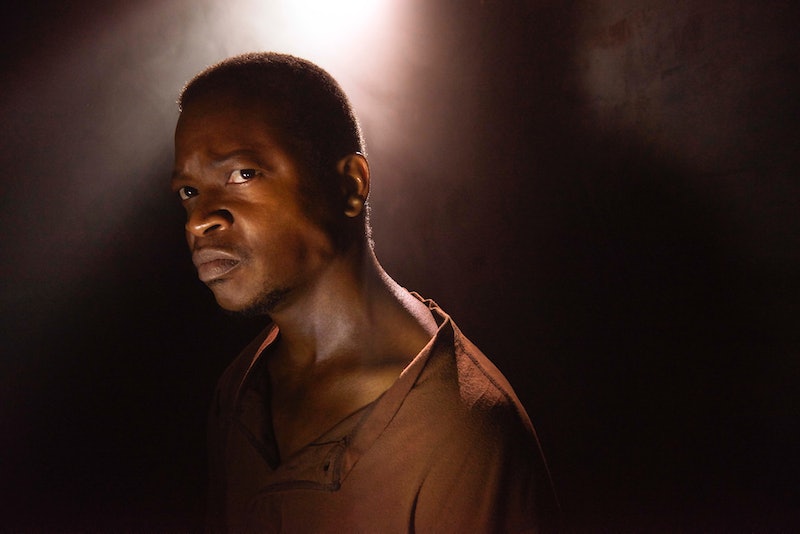 When Bob Stookey entered onto the scene of The Walking Dead in Season 4, we didn’t know much about him except that he had been pulled into the drug dealing game by his uncle (oh wait, that was actor Lawrence Gilliard Jr.’s role on The Wire). Anyway, since then we’ve learned that he’s an alcoholic, has a thing for Sasha, and that he is always the last survivor of the groups he is with, which makes me wonder — could The Walking Dead's Bob be immune to zombies? I’m not the only one to have considered this theory to be a possibility. And as The Walking Dead returns for Season 5 on Sunday, Oct. 12 at 9 pm, an immune survivor in the group could be a game changer.

I've chosen to not look at Bob's fate in the comic books since his TV persona is quite different from the comics. And from the TV show, we don’t have too much evidence that suggests Bob may be beyond getting infected, but the former military medic feels like he is cursed to be the last-man standing. He was with two groups before meeting up with Daryl and Glenn — and all the people he was with before ended up dying. That’s slightly suspicious, but we’ve seen that Bob can handle himself against zombies (when he’s not too busy reaching for a liquor bottle). Now that he’s with Rick and company, I sincerely doubt he will be the only person to survive this time around (uhh, he better not be), but was it just a combination of luck and skill that has gotten him this far? Or is there something bigger at play?

Another thing that fuels this theory is the fact that Bob got bit on the shoulder while on the road with Sasha and Maggie — and he didn’t get infected. The walker didn’t successfully break the skin due to a bandage, but it was still a close call and pretty amazing at that. How many other times have we seen someone get bitten without the zombie breaking the skin? And usually the only way someone survives a bite is by getting amputated. It could have just been a coincidence, but maybe it's more than just that. (Although then it would be less of Bob being immune and possibly something to do with the walkers not being able to break his skin? I'm going to admit that's a really pushing this theory.)

I haven’t loved Bob as a character, but I was happy that he pushed Sasha to continue to help Maggie in her search for Glenn. And I approve of the Sasha and Bob blooming romance (especially if we might be losing some of our other Walking Dead lovebirds, but I will not accept that just yet). If he is immune, I would assume he doesn’t know it himself (or else he’d be walking around like king of the world) and a revelation that he holds a key could be super fascinating.

For Season 5, we’re sure to see if Eugene really has an answer (doubtful) and if the hospital that Beth is in may have something to do with a cure. But perhaps the answer has already been in front of the gang — in the form of Bob.

OK, OK. I know this is all a stretch and even if he is immune to becoming a zombie, he’d still die if a zombie tore off all his flesh. But if you’ve been watching The Walking Dead marathon on AMC in anticipation for the Season 5 premiere, it could be fun to see if you can spot any evidence that Bob has a bigger secret yet to be revealed.