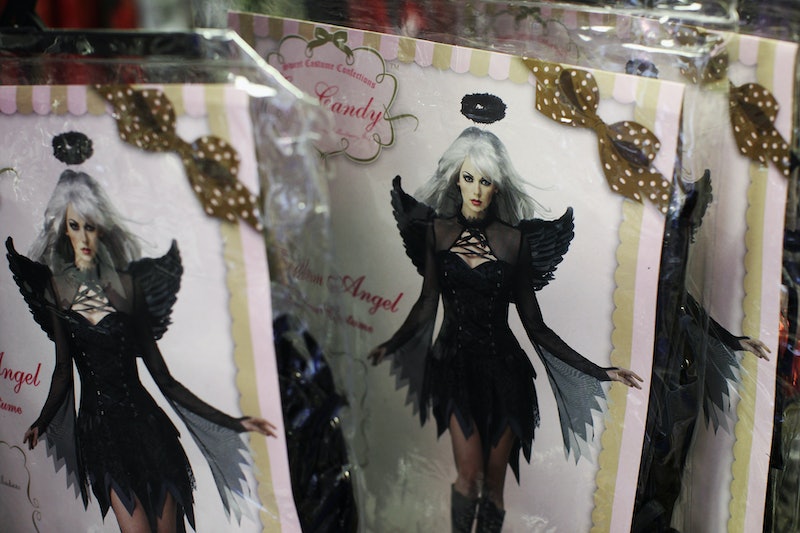 By now the "sexy" Halloween costume is a pervasive part of our culture. Unless you make your own costume, you'd be hard-pressed, as a woman, to find one that isn't short, tight, and skimpy. The good folks at Reddit put together a little social experiment detailing how women's store-bought Halloween costumes evolve according to age and the results are upsetting.

"Compiling costumes of the same generic identities—angel, pirate, devil, nurse, etc.—a post on Reddit reveals how, even from their first costumes, girls are almost conditioned to take on suggestive roles," wrote Leigh Silver of Complex. "And when these girls grow up, the costumes available to them become more explicit and comprise of less and less fabric."

The images show costumes getting shorter, tighter, and more suggestive with each passing year. Take the Dorothy costume for example. The infant and child versions are close replicas of the outfit Judy Garland wears in The Wizard of Oz: a full skirt, white tights or ankle socks, red Mary Janes or sparkling ballet flats to mimic ruby slippers.

Once a girl becomes a teenager, the socks morph into bow-trimmed knee-highs, the shoes become heels, the sleeves and hemline get shorter. The adult version of Dorothy is just a gingham bralet and ruffled mini-skirt worn with thigh-highs. Frankly, the only part that resembles the classic movie costume is the color scheme. Oh, and the brunette pigtails.

There's nothing wrong with wanting to look hot for all those costume parties you need to attend, but when there's a "Sexy Sherlock Holmes Detective" costume on the market (but not a "Smart Lady Sherlock Holmes Detective" option) that would make Benedict Cumberbatch cry, we have a problem. "Sexy" shouldn't be the only choice. Besides, sexy doesn't always mean skin-tight and belly-baring. It can be about attitude and confidence, too.

This little experiment says something about the way women are expect to present themselves in our society. Sure, dressing as a sexy pumpkin might be the punchline to a joke about basic bitches, but the fact that so many women do it illustrates an underlying problem. There is no unsexy or funny pumpkin Halloween costume available in mainstream stores. If you want that, you have to make it yourself.

Oh, and if you're curious, this is what an adult men's Wizard of Oz Scarecrow costume looks like:

Where's the shirtless man wearing "straw" fringe leggings and matching nipple pasties? I'm pretty sure that's what the women's version of this costume would look like.

Might I suggest skipping the over-priced Party City offerings and putting together your own badass '90s-inspired Halloween costume instead?

More like this
Rita Ora’s Sheer Dress & Mermaid-Inspired Prosthetics Stun At British Fashion Awards
By Sophie McEvoy
26 Christmas Outfit Ideas That Will Sleigh The Holiday Season
By Allie Fasanella
Cyber Monday Deals 2022: The Best Fashion Sales To Shop
By Dominique Norman
The Best Black Friday 2022 Fashion Deals To Shop This Year
By Dominique Norman
Get Even More From Bustle — Sign Up For The Newsletter