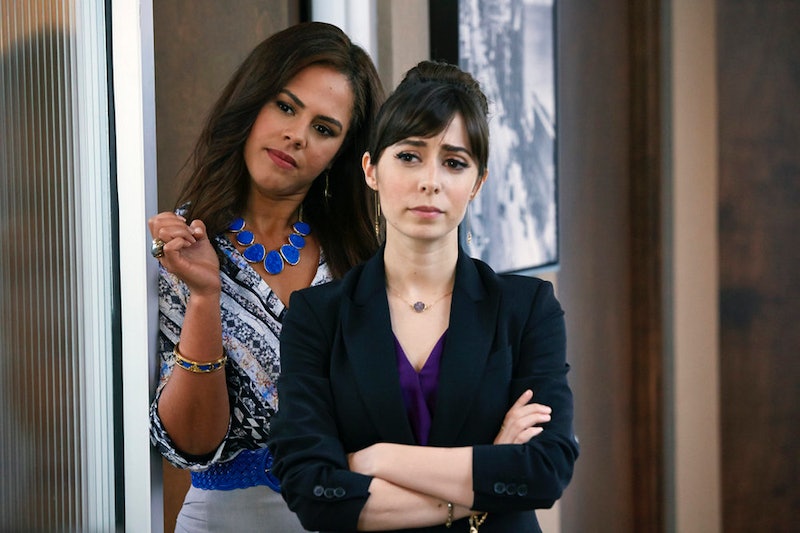 It's way too early in the season to start making calls about which new show of 2014 is my favorite, but I already know that A to Z is in the running. Maybe because it gives me the opportunity to pretend there's a world where How I Met Your Mother's titular character is still alive and well somewhere, or maybe it's because I've never met a rom-com I didn't immediately fall in love with. Either way, A to Z's particular brand of quirky charm is totally working for me, and the concept they're going with is absolutely brilliant. And like in any traditional rom-com, Cristin Milioti's Zelda and Ben Feldman's Andrew both have their own set of colorful sidekicks — and Lenora Crichlow's Stephie might be my favorite supporting character so far.

Stephie plays a nice contrast to the more cynical Zelda. Instead of refusing to believe in the magic of love like her scorned best friend, Stephie's all for it — her thoughts mostly consist of gooey relationship stuff, and she's basically everything that Zelda isn't. Which is what we all look for in a best friend, right? Someone who can offset us when we need it. And in case you were wondering about Crichlow, the woman behind Stephie, let me fill you in. She's actually pretty awesome.

Before she was Stephie, she was Annie, a ghost on BBC's supernatural dramedy Being Human. Crichlow's role ran from the show's first season in 2009 to its fourth in 2012, when Annie moves on to the afterlife. Annie was referred to as "the heart of the show," so don't be surprised if Crichlow works her magic on A to Z all over again.

In the 2012 British sports drama Fast Girls, Crichlow starred alongside Lily James and Bradley James when she played the lead role of Shania Andrews. The movie's about Britain's sprint relay team, and Crichlow ended up training with Olympic hopefuls in order to make her athleticism come across as genuine on screen. Fortunately, I feel like prepping to play Stephie couldn't have been nearly as exhausting.

Happy Feet is one of her favorite movies

"What’s not to love? Dancing, singing penguins and the fantastic Robin Williams as Lovelace," Lenora told Metro in 2012. "It made me laugh so much."

She also loves The Color Purple, The Full Monty, Hook, and The Hurricane. Clearly, this girl has excellent taste in movies.