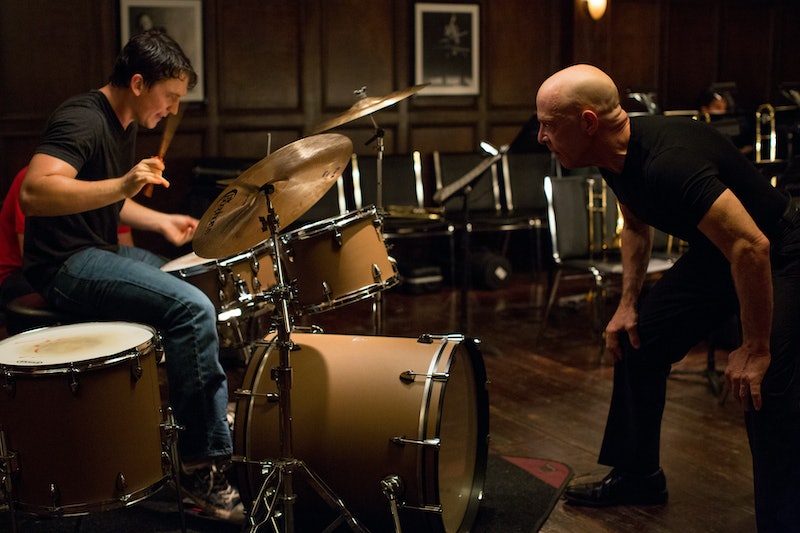 The pitch-black theatre mutes all of my senses but one: Sound. Anticipating the first accosting image to flash across the screen, a soft drum beat permeates my eardrums instead. It gets louder, and louder, and louder, until it stops. Blackness. "Holy shit," I think. "This is going to be good."

2014's Sundance darling, Whiplash , is the story of a promising young jazz musician (Miles Teller) who enrolls in the country's most cutthroat music program, where his hopes of becoming one of history's greatest drummers are mentored by a — let's say — intense instructor. From the description alone, the film appears to be catered to a niche audience: lovers of jazz music, indie film fanatics, even Miles Tellers' onslaught of wannabe groupies would surely flock to see the flick.

But Whiplash isn't a film about music, it's 2014's most nail-biting and diligently-edited thriller. There are no guns, no chase scenes, no duct-taped hostages or damsels in distress. The Damien Chazelle directed feature is a movie more captivating and sweat-inducing than any Liam Neeson flick in creation, and herein lies its brilliance.

J.K. Simmons takes on Fletcher, the abusive, drill-seargent of a teacher who cares more about achieving perfection than if his students live to see the end of a rehearsal. The actor, known for portraying the no-nonsense news editor in Toby McGuire's Spider-Man flicks, takes on the role with visceral perfection. His performance can be summed up in two words: Oscar-winning. I had the pleasure of speaking with J.K. Simmons about the film, working with Teller, and conquering one of the most memorable cinematic antagonists in recent history.

"From Fletcher's point of view, his motive is one thing and one thing only. He wants to elevate the art form. He wants to be the guy that's responsible for finding, molding, and creating a genius who surpasses Louie Armstrong and Charlie Parker," Simmons said. "His single-minded obsession is what drives him, and the human collateral damage is insignificant in pursuit of that goal."

Simmons, who cracks jokes, offers a hearty laugh when he mispronounces a word, and drops the occasional swear word, appears to be nothing like his on-screen role. "It was a character that I believed, and could identify with his passion and his objection if not his methodology," he explained. "And the script, the script, the script. It was a great culmination to see it's being greeted enthusiastically both by critics and by audiences at large."

Whiplash won both the Grand Jury Prize as well as the Audience Award at Sundance Film Festival, proving it has legs as both an immaculately crafted work of art, and a gripping flick for the masses. But Whiplash is not for the faint of heart. It may be without literal violence, but with each scene — every beat — the tension builds and builds and builds, until the audience is begging for relief.

Shot in only 19 days, I was curious to know what the energy was like on set. Surely Fletcher was a difficult character to switch on and off, a mind-set so deep in twisted psychosis it would take more than a director yelling "Cut!" to snap out of. But my hypothesis was wrong.

"It was a surprisingly light-hearted set," Simmons revealed. "We would be doing whatever scene it was, a quiet scene, or me berating Miles or smacking him around or throwing shit at him — whatever it was, when Damien said 'Cut!' we'd just hang out, chill, joke around and have fun."

And his character's on-screen abuse towards Teller has not gone unnoticed by critics. One article quotes Simmons as calling his young co-star a "slappable little bastard." When I made light of this comment to Simmons, he laughed. "You've got to be careful what you say in a print interview," he said. "Miles and I settled into this relationship where the most fun we had was giving eachother shit, ragging on eachother like a couple of idiotic sophomores in some football locker room in 1970-something."

But slapping around Miles Teller wasn't Simmons only duty. His degree in voice, composition and conducting came in handy on set. The precision in which Simmons directs the baton on camera is reminiscent of a butcher's knife slicing open a slab of meat. Salient, determined, clinical.

"Reading the charts, practicing the piano... the biggest challenge for me was musical. I wanted to be intimately familiar with these scores and these charts, and there are some very, very complex pieces."

Complex being a word to describe the entirety of the film — the relationship Teller has with his teacher, his girlfriend, his father, himself; The intricate web of manipulation Fletcher spins; And of course, the musical numbers that cause Teller to pool blood onto his drum kit.

Whiplash is everything award season is aching for in a Best Picture. But unlike other Oscar-nominated thrillers — the last 40 minutes of Zero Dark Thirty, or the rescue sequence in Tom Hanks' Captain Phillips, Whiplash delivers all the heart-pounding suspense and intrigue of a blockbuster thriller with the scale of a low buget indie. And that's magic.