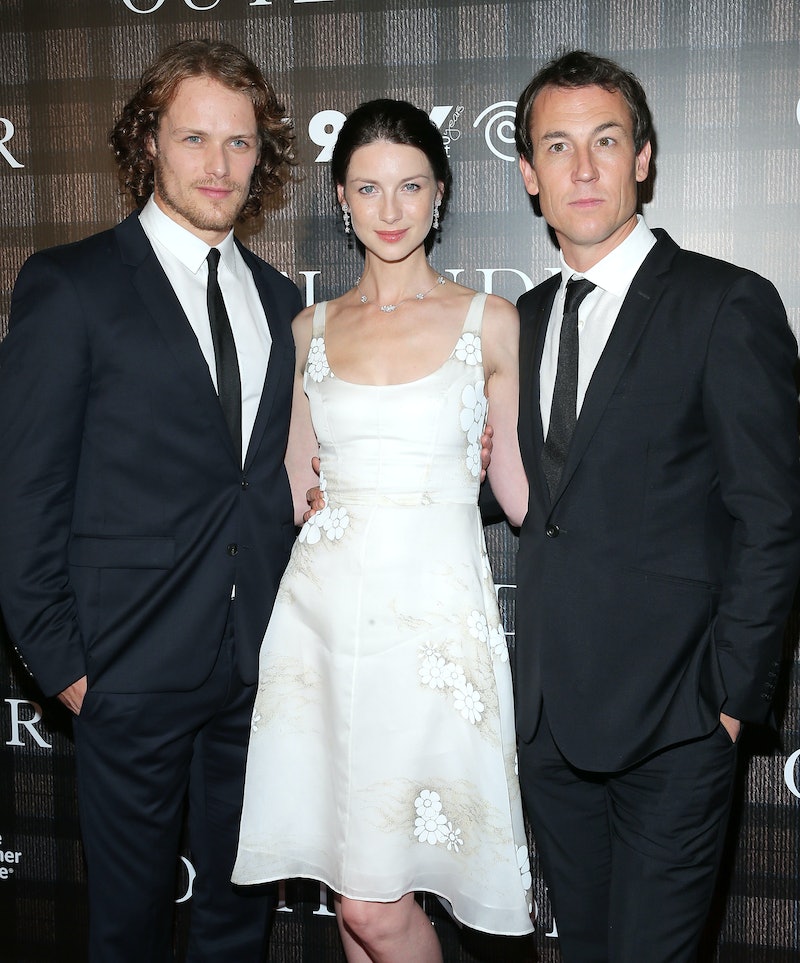 Jesus H. Roosevelt Christ! How could Outlander leave us midseason with so many unanswered questions and refuse to return until April?! Oh, the agony. At the conclusion of a riveting eight episodes of the Starz series, the Outlander midseason finale left Claire at the mercy of the story's main villain. But before Garrison Black Jack Randall can succeed in brutally raping Claire, Jamie manages to find them in time, clearly willing to risk his freedom to rescue his wife. Evidently, Jack's second attempt at violating Claire failed, but also recall that before now Jamie was on the run from the redcoats and officially just blew his cover. Heroic, yes, but now we have to wait another six months for Outlander's return to see how the rest of that dramatic scene plays out.

When Claire Beauchamp's fiery love triangle returns to Starz on April 4, it will likely open with our heroine still bent over a table with her skirts ripped open, a blade pressed to her skin and her Scottish husband armed in a window, ready to eliminate her attacker. TV and book nerds alike are dying to see what's next for Saturday night's hottest couple and the midseason premiere is bound to answer some of our burning questions.

WHAT MADE HER REMEMBER HER MISSION TO GET HOME?

After a shockingly successful lesson, Claire learned to use a knife as protection, which came in handy when she was found in a compromising position unable to defend herself. Even worse, in her mind, might have been the fact that Jamie was unable to defend her against the British. If she hadn't the knife to slay her attacker, she and Jamie may have both lost their lives. Something about the event shook her awake in a way that made her realize that this time and place and man is not where she belongs. Returning to the stones was momentary evidence that who she truly is is on the other side.

COULD SHE AND FRANK ACTUALLY HEAR EACH OTHER?

When Claire initially fell through the stones, she heard a screeching as if the stone was rejecting her presence. She never quite lost consciousness and yet she found herself completely lost in 1743, even though the scenery didn’t change a bit. In the midseason finale, when she returned to Craigh Ne Dun, it appeared as though she heard Frank on the other side of the stone, screaming for her — and she might have. If she knows Frank is out there looking for her will it turn her away from her Scottish allies? It wouldn't be all that surprising if the shouts were real. And if Frank believes he heard her, he certainly won't give up his search.

WOULD SHE HAVE GONE THROUGH THE STONE?

It seems fairly likely that even if Claire wasn’t truly hearing Frank on the other side of the standing stones, that she at least imagined she did. Claire's abandoned-in-the-future husband is far more present in the Starz series than he is in the book, and it makes us all-the-more sympathetic of him. Starz gave us two men to root for and I think in the moment Claire wanted nothing more than for the stones to work. According to the songs, women who fall through the stones often find their way back, so it's possible that if she had gotten the chance, Claire might have been one of them.

WILL STICKING UP FOR CLAIRE BE JAMIE’S DOWNFALL?

When Jamie suddenly appears in the window and way-too-politley asks Black Jack to get his hands off his wife, he is essentially coming out of hiding. This is the man who has flogged Jamie a hundred times over and would never hesitate to do it again. I truly hope the impending feud between the two ends in Jamie's favor because it would make for some seriously passionate scenes between him and Claire. His sole purpose of rescuing Claire is to redeem himself for being unable to defend her earlier. If he can do it, she just might lose track of her mission for adoration of her 1743 husband — at least in the meantime.