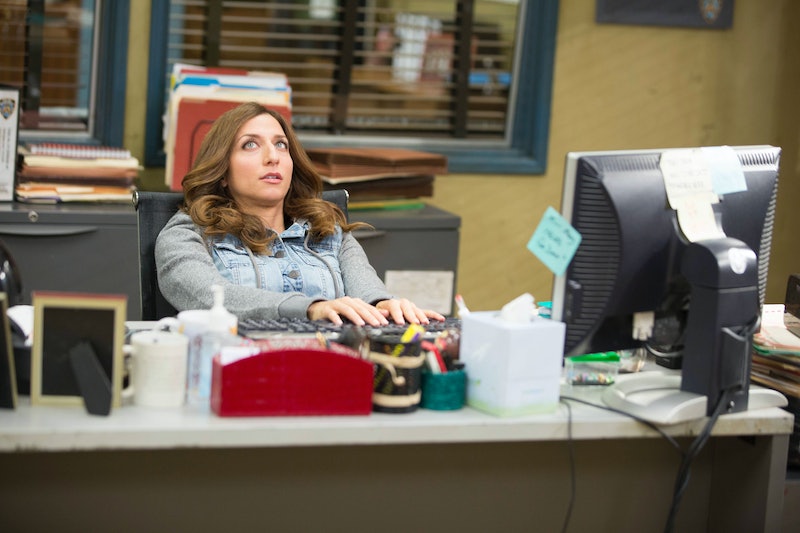 Brooklyn Nine-Nine Season 2 so far is just as hilarious as the first, proving that their cast wasn't a fluke, these people are the real deal. And of course one of the best is Gina Linetti, the receptionist who always carries a hair dryer in her purse and gets away with everything at work that you wish you could. But even though Gina is slowly deepening into an actual character with her maybe-relationship with Boyle, let's be honest: what really makes her amazing is the best Chelsea Peretti quotes from Brooklyn Nine-Nine . It was almost impossible to narrow this down to just ten selections, but somehow I managed to pick out the ones I thought were most applicable to everyday life (and that made the best gifs).

I would happily watch an entire show devoted solely to Chelsea Peretti reacting to things. Also, let me say — with all the rumors swirling about who's going to be cast in the new Ghostbusters movie, if Peretti is not cast as some kind of psychic or paranormal expert who's a dispassionate, deadpan version of Theresa Caputo I will not be satisfied with that film at all — in fact, I WILL NOT HAVE IT. But until that happens, we'll have to be satisfied with a collection of Gina/Chelsea's greatest pieces of wisdom.

"The English Language Can Not Fully Capture the Depth and Complexity of My Thoughts."

Emoji have done more to advance our ability to communicate than the invention of spoken language. Flamenco lady!

Pay attention to how she uses her hands here — yeah, it's a part of what makes the quote both an request for and an example of pizazz.

"Honestly, I'm Going To Last Forever. You Hear That, Bitches?"

Note that she is wearing the same sweater from the last quote in a different color. That has nothing to do with the quote, which I find enjoyable to sing quietly to myself daily.

When things go wrong in my life at least four or five times a day, I calm myself by doing this.

I feel like Paris calls itself the Beyoncé of cities. That feels right, doesn't it?

"As Everyone Knows, My Spirit Animal Is Nature's Greatest Predator, the Wolf."

Every strong woman's spirit animal should be a predator with high cheekbones and naturally occurring eyeliner.

Look, if you don't come away from Disney movies with life lessons to share with your closest friends, you are doing things wrong.

There's honor in being honest.

A (Wo)Man's Gotta Have a Code

Some phrases are just inappropriate.