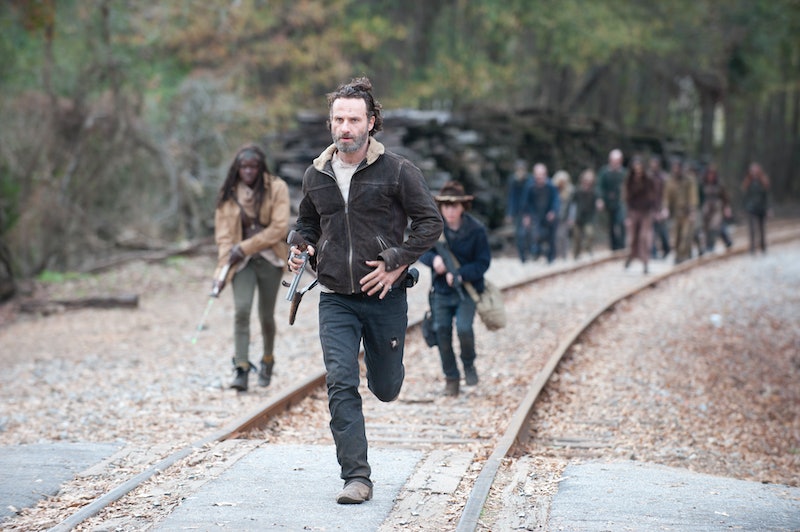 The first episode of AMC's The Walking Dead Season 5 hasn't even aired yet, but the network has already renewed the zombie ratings-juggernaut to come back next year. Woah, hold up. I know what you're thinking. It's been eight long months since Rick and his crew showed up to the mysterious Terminus, and you wouldn't be alone if all you could remember about Season 4 was that they did a lot of walking on train tracks. But before the long and winding road to Terminus was a virus that wiped through the prison and an all-out war with the Governor (I know, I forgot too). To help you catch-up before Sunday night's premiere, here's a Season 4 recap of everything The Walking Dead brought to our TV screens last year.

Season 4 kicked off after the gang successfully escaped the Governor and Woodbury's evil grasp, but not before we lost early characters Andrea and the newly-returned Merle (we didn't miss you). A flashback in the middle of Season 4 reminded us that post-showdown, the Governor massacred his Woodbury army — only letting henchmen Martinez and Shumpert survive (who, not surprisingly, decide to escape his grasp later that night). The Governor returns to the one-time Pleasantville and burns Woodbury to the ground. Now back to the people we actually care about...

"30 DAYS WITHOUT AN ACCIDENT"

The birds are chirping, the sun is shining, the walkers are moaning, and Rick and Carl are happily gardening together. Dad and son are laughing about Carl staying up late last night to read comic books and chatting about Violet the pig. Beth's got a new boyfriend with Woodbury transplant Zach, and Tyreese and Karen are in love. All is well.

But of course, nothing good lasts forever and nothing good gets to last for more than 30 days in post-apocalyptic America. Zach gets killed with a supply run goes wrong, although Beth is rarely fazed. But things start getting really bad when kid Patrick gets sick in the shower and reemerges as a Walker, killing one of the prison’s residents and launching an attack from within. People starting getting infected left and right — including Glenn and Sasha, and we find out the virus came from the pigs. Meanwhile, the group has to deal with an ongoing mob of walkers threatening to tear down the prison's fence at any moment. The group finds out someone is luring them over with dead rats and the season is off to an insane start.

Tyreese’s GF Karen ends up mysteriously and brutally murdered along with another sick resident. To our surprise, it was Carol who killed them! She wanted to stop the virus from spreading, but is banished by Rick after he finds out what she's done (at least he gives her a car). Then Hershel saves the day after the gang brings back medicine from a nearby veterinary clinic and he takes over for the dead Dr. S. I love Hershel, good thing he’s not going anywhere. Oh wait, he’s about to go on a supply run with Michonee outside the prison walls…

WAR WITH THE GOVERNOR

After burning down Woodbury, the Governor finds solace with a new family pretending to be an ordinary guy named "Brian." It only takes him like two days to seduce a woman named Lilly, and get on the good side of her daughter Meghan and sister Tara. The magic of backgammon.

Brian and the girls somehow stumble upon Martinez’ new camp, where the Governor quickly regains his henchman’s trust and kills him during a drunk game of golf. The Governor then turns the camp into his own personal prison-busting army, and after capturing Michonne and Hershel as his hostages, returns to the prison and demands that Rick and co. leave or incur his wrath.

New peaceful farmer Rick offers that they all live together in piece, but the Governor is like “nah.” Then he decapitates Hershel in what is probably one of the most heartbreaking scenes of the entire series, as the camera pans to the devastation all over Maggie and Beth’s faces. With that moment, Farmer Rick is no more. All hell breaks loose as a tank bursts through the gates, rendering the prison vulnerable (and now useless) not only to the Governor’s crazy army, but the building mass of Walkers. Bullets and knives fly as the survivors scatter everywhere. The Governor almost beats Rick dead until Michonne stabs him with her recovered Katana. But in the end its Lilly, who we see carrying her dead daughter, that gets to shoot the Governor before falling to her own death.

While the first half of Season 4 was filled with bloody infected victims and all-out war, the second half of the season did a complete 180 and focused primarily on character development, slowing way way down. The remaining survivors split into five groups whose paths eventually intertwined on the road to Terminus.

The newly-created family find a house they decide to make a home, but their brief moment of sitting by the fireplace and basking in contentment doesn’t last long thanks to Lizzie. The girl just can’t seem to realize that Walkers are not your friends. "They just want me to change, to make me be like them," Lizzie tells her sister, revealing she was the one who left dead rats out for the Walkers in the prison. Lizzie kills Mika and almost does the same to Judith before Carol and Tyreese intervene.

Remember when I said Hershel’s decapitation was the one of the most heartbreaking scenes of the series? It doesn’t even compare to Carol’s line “look at the flowers,” as she lifts a gun to the Lizzie's head while Tyreese watches on, baby Judith still safely in his arms. That night Carol finally confesses to killing David and Karen, but Tyreese forgives her. They dig graves for the girls and head down the tracks, Judith in tow.

Compared to the other groups, not much happens in this threesome. Bob is happy that he’s finally not alone. Maggie is obsessed with finding Glenn and seems to have forgotten she has a sister or just assumes she's dead. The three fight over whether to go to Terminus, and Maggie attempts to leave the group in the middle of the night after overhearing Sasha say that she thinks Glenn is dead. Maggie tries to make it out on her own — only to realize what a dumb idea that is and wait for Sasha and Bob the next day. The three decide to follow the tracks to Terminus, with Maggie using the blood of Walkers they’ve killed to write signs to Glenn to follow her path.

After the most badass escape since his last most badass escape in Season 1, Glenn finds a guilt-ridden Tara, who promises to help reunite him with Maggie. The unlikely twosome soon run into an army tank carrying Abraham, Eugene, and Rosita, who are on their way to Washington, D.C., purporting that scientist Eugene can find the cure for the zombie disease. T

he group temporarily splits up when Glenn and Tara have to take a tunnel through hell to continue following Maggie’s signs towards Terminus, but the D.C. gang eventually helps rescue them — along with Maggie, Sasha, and Bob — and the adoring couple are finally reunited. The newly amassed group is the first to reach Terminus, where they’re greeted by a nice looking woman named Mary who offers them... something to eat.

After Beth gets kidnapped while trying to flee a Walker showdown in a funeral home, Daryl is forced to join the group of scary armed guys that almost got Rick killed episodes before. Joe, the group’s leader, convinces Daryl to stay with the crew and reveals he’s tracking a man who killed one of their own (ahem, Rick).

Carl and his badly-injured dad ditch the war-torn prison, but not before catching the devastating sight of baby Judith’s blood-covered car seat and believing she’s been killed. Rick is barely holding on after the Governor’s brutal beating, and Carl almost fools himself into thinking he’d be just fine without his dad. Nice try, kid. The pair are quickly reunited with Michonne, who had been tracking their path, but the harmony doesn’t last long after Rick kills a stranger when a crew of scavengers tried to loot their home.

It’s a decision that comes back to haunt the group when they’re ambushed again by Joe’s group as they follow the train tracks to Terminus. Carl is viciously attacked, but Rick saves the day and his kid when he takes a big bite out of Joe’s neck, ripping apart his jugular in one of the series’ most graphic and bloody scenes. Michonne and Carl share a touching moment after the trauma, with Carl admitting to terrible thoughts in his head that make him feel like a “little monster.” Michonne, who had previously shared with Carl that she had a young son who was killed in a survivor's camp, reveals more about her past, explaining that the two Walkers we saw escorting her when she first appeared on the show was actually her dead boyfriend and friend.

The group, reunited with Daryl, proceed to Terminus, although they enter more wearily than the first group did and hide their weapons outside. Inside, Rick starts spotting some familiar items, including Hershel’s pocket watch adorning leader Alex, and realizes something’s not right. A firefight ensues and Mary accidentally shoots Alex in the head. But the group gets cornered in a dead end (after running through a very suspicious room with the words “Never again. Never trust. We first, always” scrawled on the walls) and are eventually forced into a boxcar.

But surprise! Waiting for them are Glenn, Maggie, Sasha, Bob, Tara, and the D.C. gang. The season ends with a bang when Rick declares “They’re gonna feel pretty stupid when they find out… they’re screwing with the wrong people.” And I can't wait to see just what those people will do when The Walking Dead returns.