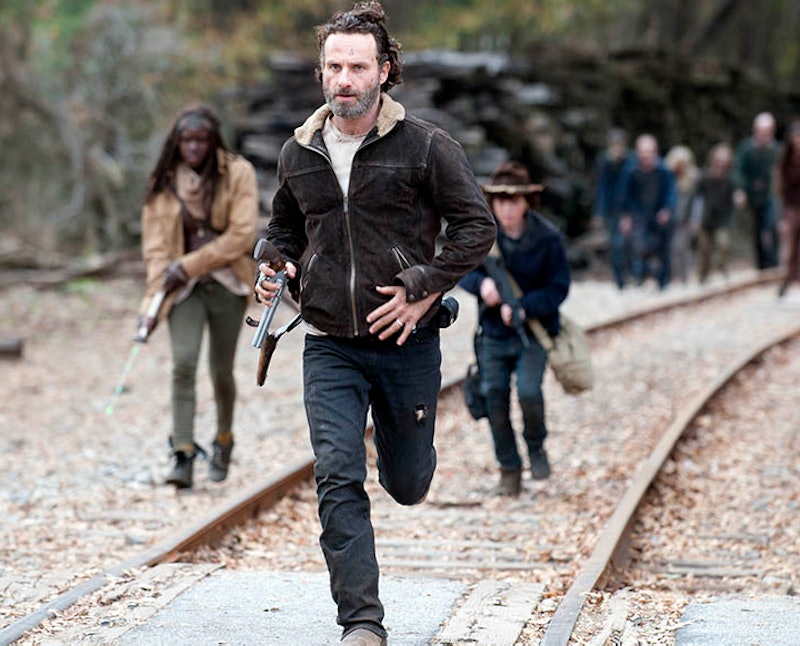 The highly anticipated Walking Dead finale was filled with crazy twists, that managed to surprise viewers after weeks of speculation and an abundance of theories. Who will die? What is Terminus? Where's Beth? Only one of those questions was answered and even that was a shock, as not a single main character died, but one could at any moment now that Terminus turned out to be much less welcoming than its signs claimed. Luckily for the characters and fans, one of the finale's surprises was to bring back badass Rick and just in time, as Season 5 seems like it's going to really need him.

Though what's actually happening at Terminus still isn't clear, it's definitely not good. The upside? Carl, Rick, Daryl and Michonne were reunited with Glenn, Maggie, Bob, Sasha and the new guys. The downside? In an empty train car with the citizens of Terminus surrounding them, after being herded there with machine guns as they ran through some very suspicious places. Even though its decidedly sinister, Terminus remains annoyingly vague. All we know is that Gareth and Mary had the same well-rehearsed welcome speech, other residents are wearing Glenn and Maggie's possessions, there is a large amount of dead bodies just outside a fence and they have a candle-filled room with messages painted on the walls reminding them to trust no one.

Um, yeah. Farmer Rick can kindly GTFO. This isn't a place for Officer Rick either, what the group needs is full-on badass Rick, and based on the finale's closing scene, that's exactly who they have.

It's reminiscent of the second season finale, when the group gathered on the side of the road after Herschel's farm burned down. They had all fought over what to do about the farm, Sophia, Shane. Once it all went to Hell, Rick took charge.

In addition to the endless Ricktatorship jokes, this ushered in a more assertive Rick. Rather than try to keep the peace and listen to everyone's opinions, he made decisions based on what he thought was best, which helped as the group first battled The Governor in Season 3. However after a short bout of dead-people-hallucinations followed by the big Woodbury conflict, the fourth season featured a much weaker Rick. He feared for Carl, who seemed to be getting too tough too quick, and decided to trade his role as leader for farmer.

We were oh-so-subtly reminded of this throughout Sunday's finale, thanks to frustratingly boring flashbacks to Herschel (R.I.P.) and Rick at the prison. Once The Governor attacked, again, it was clear that Rick could never be just a farmer. The group and their enemies will always look to him as a leader and when his inaction lead to The Governor killing Herschel, things changed.

The second half of Season 4 has followed Carl, Rick and Michonne as they look for a new place to settle and eventually head towards Terminus and all the while, Rick has been regaining whatever it was he lost when Lori died. When a group of men takeover the house Rick is staying in he kills one of them in the bathroom so that he can escape without them knowing. So once we learned that one member of the group, now joined by Daryl, had seen Rick and they were tracking him down, we knew trouble was brewing. We just never could have realized how much.

It was obvious that the group, lead by Joe, was bad. In the house with Rick they seemed to brag about raping someone and two of them got into a very violent fight over a bed. Even Daryl knew they were bad, he just hoped their code of "claiming" things and being honest meant they weren't too bad—but he was wrong.

When Joe's group finally finds Rick, they immediately surround him and Michonne while an unknowing Carl sleeps in the car. When Daryl realizes who the group is about to attack, he runs into the circle and asks them to stop, even heartbreakingly offering to let them kill him instead of Rick. But that only angers Joe and his crew more. He has some men start beating Daryl, while another pulls Carl out of the car and, in what is easily the most disturbing scene The Walking Dead has ever done, threatens to rape him and seems to attempt to do so.

Rick and Michonne try to fight back but are outnumbered and cornered, or so it seems. Rick sees just how bad these men are and as Joe seems to trap Rick, pinning his arms to his sides, Rick snaps. He's no longer a cop trying to keep the peace, or a leader making the decisions for everyone, and definitely not an unarmed farmer. Rick is a man who has suffered and lost people he loves, and will do anything necessary to protect the family he has left—even if it means taking a cue from the walkers.

This should be the last transformation we ever see Rick make, since ripping someone's throat out with your teeth seems like it would be pretty hard to come back from. Joe's group is so shocked that Daryl and Michonne are able to draw their own weapons and soon the entire group is dead, ending with Rick aggressively stabbing the man who attacked Carl over and over. The insanity of that whole fight is not lost on Rick, who sits almost in shock outside of the truck.

Luckily this isn't another phone-to-heaven situation and he soon has a coherent conversation with Daryl, but it's still obvious that Rick has changed. And he needed to.

Terminus might be a strict society under the violent rule of Gareth or it could be a community of cannibals or something else entirely, but no matter what it is really, it's not a sanctuary. At least not for Rick's group. That's who they are, Rick's group. They're going to need him to take charge now more than ever and it seems that finally, he's ready.

Gareth, Mary and the rest of Terminus need to watch out. It's badass Rick they've got trapped in train car "A," and he's not going down without a brutal fight.

More like this
'Bosch: Legacy 'Is Bringing Its Beloved Main Character Back
By Kadin Burnett
Kanye Walked Out Of Kim's 'SNL' Monologue Because Of These 2 Words
By Jake Viswanath
Selena Gomez’s ‘SNL’ Hosting Debut Had Twitter Gushing Over ‘Barney’ & Wigs
By Stephanie Topacio Long
What’s New On Netflix: A Victoria Justice Rom-Com & The Return Of David Letterman
By Arya Roshanian
Get Even More From Bustle — Sign Up For The Newsletter