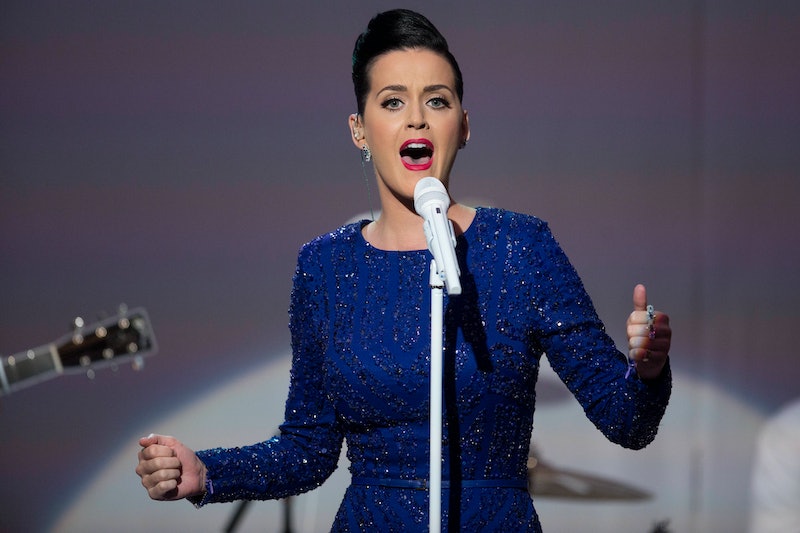 There have been rumors swirling around the Super Bowl half-time performer for months, but now, reportedly, Perry is the Superbowl half-time show choice. Rumor has it that she was short listed with Rihanna and Coldplay for the performance. But, considering Rihanna's recent issues with her Thursday Night Football song being pulled, it wouldn't be surprising if her name was crossed off the list. And Coldplay? Well, they're just not the most lively band. Sure, their hits climb the charts and remain on radio stations for years but, as I see it, they are just not exciting enough. If they were chosen, I would be more focused on looking to see if Gwyneth Paltrow and Jennifer Lawrence were bopping their heads together in the audience as some sort of public gesture about how civil the "conscious uncoupling" was.

As for Katy Perry, she could never be boring even if she tried. She is always evolving and up to something interesting. She is always taking risks and trying hard to entertain her fans. I have been to a Katy Perry concert, and she would definitely be the perfect choice to play the Super Bowl halftime show. But as for what you can expect, in the grand tradition of betting on everything Super Bowl, here's what I think is to come for Perry's performance:

There's NO way that Katy Perry would just perform one song. There has got to be a medley of past, current, and future hits.

Singing on the most-watched event of the year calls for a killer outfit, so why not go with the three. Just don't have any wardrobe malfunctions during a quick change — lets keep that number at zero.

I am no wigologist but from what I hear, there is a lot more to wigging out that than meets the eye. I imagine there are a lot of bobby pins and other magic at work to keep a wig on during a performance, so she'll likely stick to just one.

Based on her performance of "Birthday" on the Prismatic tour, I am hoping for a ton of balloons.

Perry likes to have a party on stage and the more backup dancers the better. She might even have some cheerleaders up there since this is a sporting event after all.

Katy Perry loves everything that sparkles. From her hair, to her clothes, to her blinged out microphones, to just throwing actual glitter into the audience, there is going to be a lot of it. Shine on, girl.

Perry has been slammed hard for the cultural appropriation. So let's hope with her Super Bowl performance she doesn't say, wear, or imply something that is going to offend someone.

3 Shout Outs to Her Fans

Perry talks a lot to her audience before, during, and after performances.

Katy Perry will never miss a chance to plug CoverGirl makeup. She will be wearing a bold lip color and there will be CoverGirl logos on a screen behind her or even in a balloon. I'm the sure #instaglam hashtag will be running rampant throughout the performance. Oh and CoverGirl is the official beauty partner of the NFL.

It wouldn't be Super Bowl performance or a Perry performance without one moment that just has you scratching your head, checking the trends on Twitter, and ultimately saying "wtf."