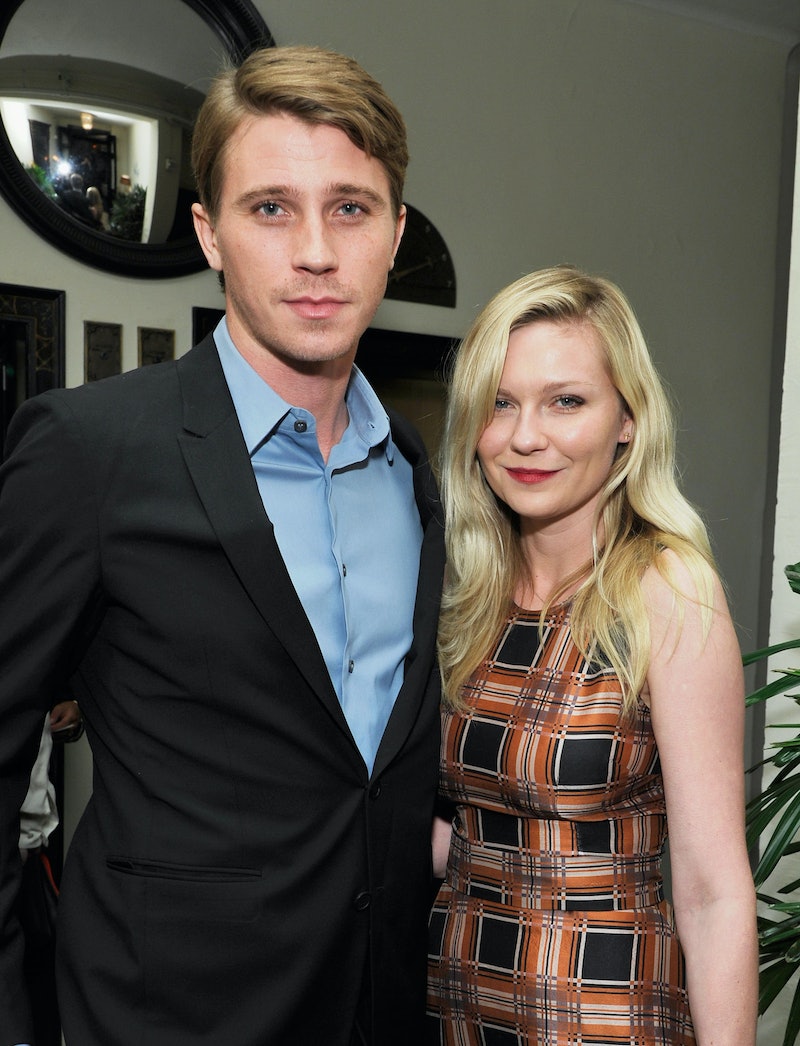 Ah, love! It's so great, isn't it? Boy meets girl on movie set, boy and girl start dating, boy and girl make it past the two year mark as a celebrity couple and haven't had any reports of a scandal so it means they're probably doing alright. That's how the story goes, right? Well, that's how it's going for actress Kirsten Dunst and her boyfriend, actor Garrett Hedlund. I don't know much about them together, but I will say that their offbeat names compliment each other very well. They both have blonde hair, light eyes, and would most likely produce offspring that would be the most blindingly beautiful blonde babies on the LA playground.

Together they seem pretty low key and stable and Hedlund told Us Weekly in May that his relationship with Dunst is all about respect. Well, that's certainly a sentiment that I can respect. Dunst explained feeling comfortable in her relationship to Net-A-Porter's The Edit in September saying,

I've got a little bit more of a tummy now ... I guess if I wasn't comfortable and in a relationship I'd be thinner. When you're with someone, you eat so much more and you chill out for a bit, but I don't criticize myself more than is healthy, because there's such a lot of that, isn't there?

Being in love is all about being comfortable being yourself, so A+, Kirsten. So what's the deal with guy? Let's find out a little more about Garret Hedlund.

1. He grew up on a farm in Minnesota

This dapper face is the face of a former farm boy. He told Complex magazine that he only had four channels when he was growing up, so he didn't see Tron —a film he starred in a remake of — until 2003.

2. In his teens, he modeled for L.L. Bean & Teen Magazine

I know he was younger then, but if he ever wanted to model for L.L. Bean now, he would totally be featured on the Your L.L. Bean Boyfriend tumblr.

3. His first film role was in Troy with Brad Pitt

The movie was hilariously inaccurate, but we all secretly enjoyed it anyway.

I'm excited to see this adaptation of Peter Pan much more than NBC's live stage production, but I think I'll be too distracted by Hugh Jackman's facial hair as Blackbeard to notice Hedlund too much.

5. He offered Steve Buscemi a cigarette after their On The Road sex scene

I didn't know that there was a Steve Buscemi sex scene in this movie and I still don't want to know this. However, Hedlund told a great story about it to Vulture two years ago:

I did feel ridiculous because after [shooting it], I asked him if he wanted to have a cigarette. And he said no! He had always asked me for cigarettes before — 'Hey, man, can I bum one of those?' — and after the scene, I was like, 'Hey, you wanna have a cigarette?' And he said, 'Uh, I'm good.'"

In my opinion, it's impossible to not be a little scared of Angie. When asked if he was intimated by her on the set of the upcoming film Unbroken, Hedlund told Man of the World magazine:

No, but I had met her a few time before, through Brad [Pitt]. She was great in terms of letting us develop whatever ideas we had about our characters. We’d pick out our own wardrobe, and she’d tell us, 'You go into hair and makeup and come out the way you want.' There was no, 'Everyone else is clean-shaven, so we’re gonna put a mustache on you.' It was a beautiful permission to have, to develop the character of John.

8. He's not great at social media

There was a huge gap of time left un-tweeted between Nov. 2013 and Sept. 2014 on his Twitter account which is simply unacceptable. Doesn't he know that the public demands even more insight into the private lives of celebrities than they currently have?! C'mon, Hedlund!

One is his girlfriend, obviously. The other is Tim McGraw. I can't stop laughing.