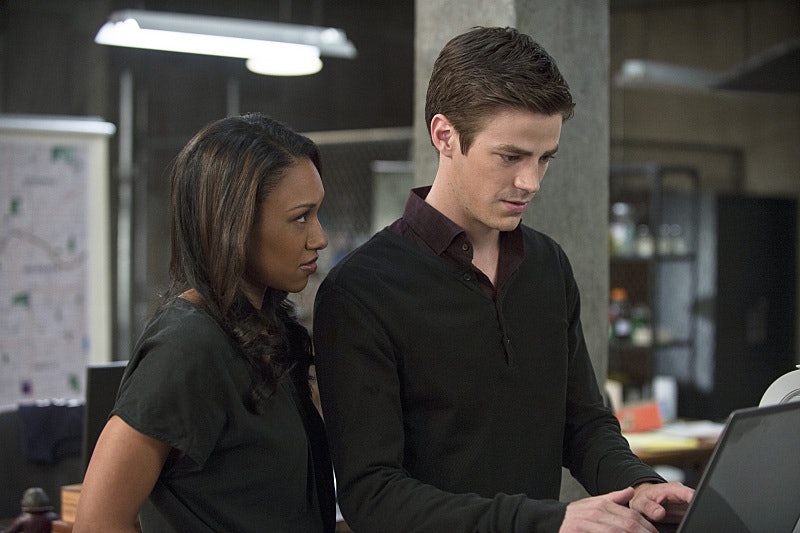 As you've probably heard, The CW's The Flash is HUGE. Yes, it's just that good. The show focuses on a mid-twenties Barry Allen, who grows up to be the Flash that everyone knows and loves. The show is the little brother to The CW's already successful series Arrow, and just like its sibling, it's made a few changes from comic book page to television screen. One of the more noticeable changes is the relationship between Barry and Iris West; in the comics, they're an item. So far on the show, they're nothing more than best friends (but Barry totally has feelings for her and basically has no idea how to express his love).

Barry and Iris made their first appearance in the comics in Showcase #4 in 1956. She is immediately introduced as the girlfriend of Barry Allen — no long courtship, no witty banter, just boyfriend and girlfriend. Like we saw in the pilot episode, Barry is kind of always running late, and in the comics Iris chides him for being unable to get his act together. She is completely unaware of his fast alter ego, but completely charmed by how down to Earth he is. Barry proposes to her on the ferris wheel at the Central City Amusement Park.

The two are married, and on their wedding night Iris learns that Barry is actually the Flash. No, not like that, get your mind out of the gutter. Barry is a sleep-talker, and Iris overhears everything he says on their first night as husband and wife. She confronts him and learns his true secret. And just like the awesome character she is, Iris is totally OK with it. I mean, she better be, considering that she's married to the Flash, and is the aunt of Kid Flash, and then grandmother of the latest, and so far last, Flash. She's the matriarch of the whole Flash dynasty.

But then, DC decided to "relaunch" their characters back in 2011 and when The New 52 was released, Barry and Iris were not a couple. They're friends, though, and it's heavily suggested that Iris has feelings for Barry. Barry, for some strange unforeseen reason, does not yet feel the same about Iris and he needs to get his act together because he and Iris are obviously soulmates.

Another small change from page to screen is Iris' profession. Iris is a reporter/photojournalist in the comics. Right now, she's working at the coffee shop Jitters, but as executive producer Andrew Kreisberg told Entertainment Weekly, "we’re going to see her take journalism to heart and that’s really going to be her beginning." It'd be great to see her slowly get into photography, and maybe happen to catch a snapshot of the fastest man alive?

As viewers saw in the pilot, Barry has feelings for Iris but she views them as a brother/sister duo. The Flash has set up Iris and Eddie Thawne, and it's a secret relationship that Barry stumbles upon. Barry isn't allowed to tell Iris' dad about her relationship, and in turn, Barry isn't allowed to tell Iris of his new super speed. Something tells me that both of these secrets are going to come to light soon enough.