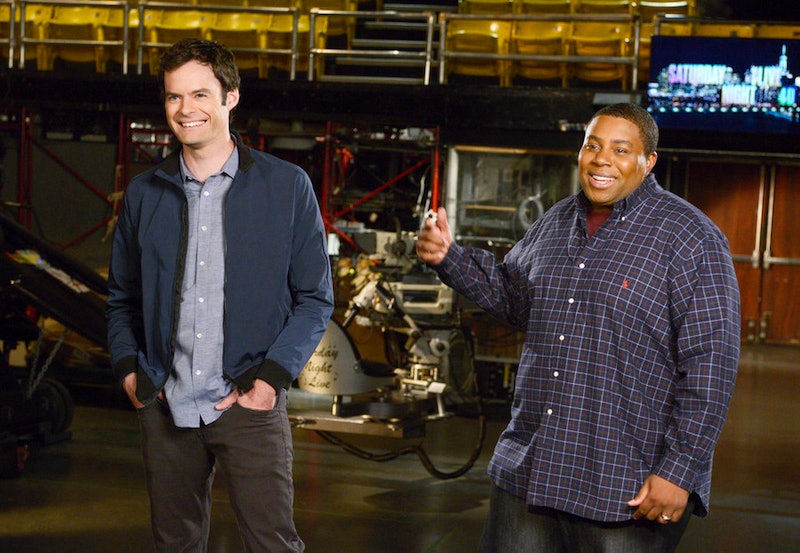 It is not unusual for the writers to parody a popular movie on Saturday Night Live. But on Saturday's episode of SNL , hosted by Bill Hader, they took it to a whole new level by combining ever single young adult novel turned movie to ever have a fandom, into one singular movie. There was The Hunger Games, Divergent, The Giver, and any other post-apocalyptic storyline you know involved in the trailer, producing one damn good looking movie, The Group Hopper .

"From the writers of The Maze Runner, the producers of Divergent, the casual fan of The Giver," and "Adapted from the comments section of a Hunger Games trailer," is the perfect way to describe the trailer for this young adult's dream film. It stars Pete Davidson, as "The Hero" or "Zero" as he thought his branded tattoo read, rebelling against what the people in power want him to become. Sound familiar? Well don't worry, because he plans to follow in his rebellious predecessors' footsteps, because as the voiceover said, if you "put him in a group, he'll hop his ass right out."

It featured everything we love about YA novels: the outcast, the rebellion, the love story, the idea of someone being a "chosen one", and an Effie look alike — played by host, Bill Hader. With lerkies, zoomerangs, and even more made up words for the made up world, The Group Hopper seemed like a really good movie, and I'm hoping Lorne Michaels spends some of his 40th season salary on producing it with the cast of SNL. I'd be first in line at the midnight show.