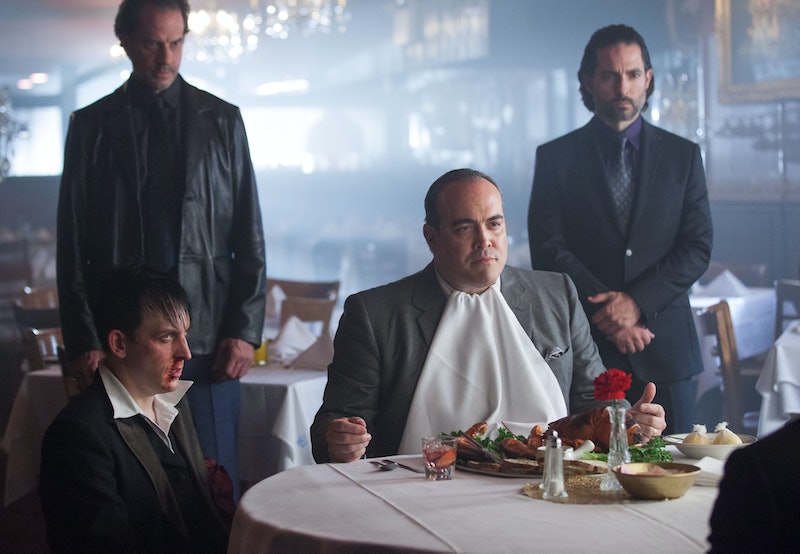 The extensive comic source material that FOX's Gotham can draw from is a double-edged sword. Sure, it gives the series' writers and producers a ton of inspiration, but it also means that every tiny decision they make can be scrutinized and obsessed over. More theories about eventual villains like Joker or Bane seem to pop up every time another minor character emerges. The latest is mobster Frankie Carbone, played by Danny Mastrogiorgio, a name that's most famous from Martin Scorsese's Goodfellas . But on Gotham, Carbone is Salvatore Maroni's righthand man, much like "Butch" is Fish Mooney's. They're the guys who do the dirty work so their bosses can maintain an air of legitimacy… even though that's pretty easy in a city as corrupt as Gotham.

We can surely expect that with Penguin — excuse me, Oswald Cobblepot — rising in the ranks of the Maroni family quickly, Frankie will sense him nipping at his heels. In what world does a dishwasher get one-on-one time with the crime boss who owns the restaurant? Probably the same one where a crime boss talks openly about his plans for citywide domination with strange dishwashers listening. And where the only crime you need to commit to warrant your murder is to have the right shoes at the wrong time.

Cobblepot is ruthless, and he'll stop at nothing to get at least to the cushy place of "favored underling" that he had with Fish Mooney. But much like Butch only tolerated him, Frankie already seems a little wary of young Oswald. Frankie and Oswald will either be unlikely allies as they attempt to ride Maroni's coattails to power just as he wrestles it away from Falcone and Fish, or they'll be like competitive siblings, always trying to become the favored party. They could team up to help Maroni stamp out Falcone, or they could team up to bring down Maroni and take his position for their own.

But it must be said, in the comics Maroni lives long enough to be a Batman foe, so unless the Gotham producers are going to be throwing continuity out the window, he'll probably claw his way back to power. Carbone is more expendable — he's not much of a famous villain. In the mob-related comic book The Long Halloween , he's one of the many gangsters that's targeted by and simultaneously targeting the Holiday Killer, a serial murderer who goes after organized criminals, but so far, he hasn't had a storyline all his own yet. Maybe the Gotham TV series will change that.