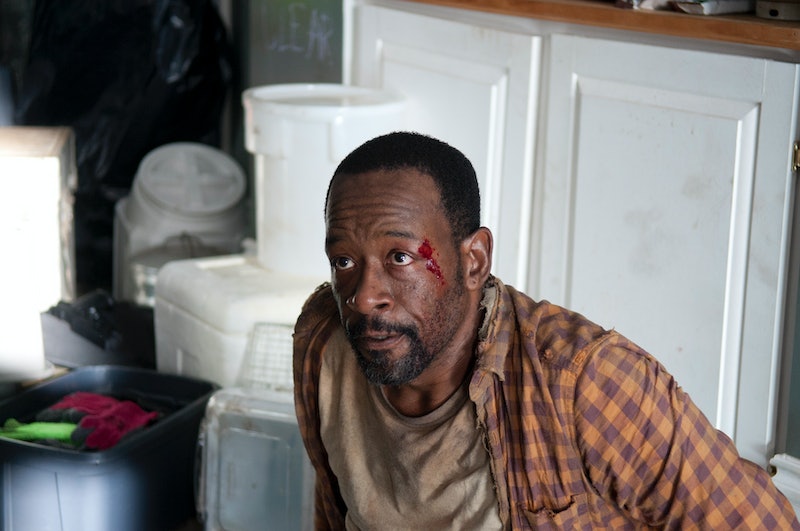 So much happened during the Season 5 premiere of The Walking Dead that once the group was reunited with Carol, Tyreese, and Judith, in an uplifting scene that we so desperately needed, I assumed the episode was over. I was proven wrong when the show flashed back to "then" and revealed the trauma that Gareth, Mary, and the rest of their family went through that lead to them becoming the "butchers" they are now. When that was over, I let my guard down, ready to see Chris Hardwick begin the first episode of this season of Talking Dead. But again I was wrong, as The Walking Dead premiere had one last surprise in store for us: the return of Morgan.

Before the group left the woods outside of Terminus where they reunited, Rick transformed the Terminus sign that had been leading people to the place into a warning. The "all who arrive, survive" was crossed out with walker blood, and added a word of his own so the sign only read "no sanctuary." The group headed off to find the next place they can attempt to survive. Then, in the final seconds of the premiere, a man with a black mask was seen walking down the road. My heart stopped, thinking it was Gareth tracking the group, but luckily, I was wrong yet again. (The Walking Dead can be extremely difficult to predict, apparently.)

The man took the mask off and revealed the face of Lennie James, Morgan. He looked at the sign, saw an x with a circle carved around it on a nearby tree, seemed to recognize it, and headed off in the group's direction. Most importantly, Morgan seemed completely sane, unlike his last crazed appearance in "Clear." Could he join the group this season and help them survive? Considering that he's pretty much the reason Rick is alive today, it'd be a great way to bring the series full circle if he were to join the group and become Rick's third in command (Daryl has more than earned the number two spot).

Plus, Morgan is just an interesting character and I can't be the only Walking Dead fan who was disappointed to see him turn down Rick's offer to join them in "Clear." In that episode, he showed what Rick could've become, a man who was driven insane by loss. Now that he's apparently put himself back together, he would be an undoubtedly valuable addition to the group not just for the sake of more manpower, but as someone else who can show that no matter what you go through, you can come back.