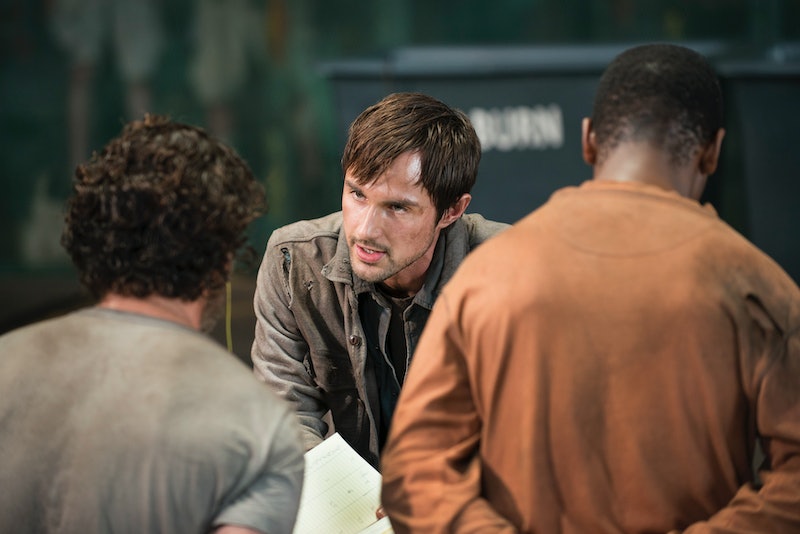 The harsh realities of the already ominous Terminus have set in for the gang on The Walking Dead during the Season 5 premiere. While the camp advertised "all who arrive survive," it's become pretty apparent that Terminus is not what it seems. The premiere revealed much more of what Terminus actually is, and all who survive do not in fact survive, but apparently end up being eaten by those who survive — or at least are slaughtered. Terminus appears to be a camp that survives on cannibalism. The propaganda style advertising should have been enough to give the idea that something was up there. But considering Rick’s crew has been dropping like flies, it was about time some new characters (as awful as they may be) were introduced.Being locked in a train car was not the most welcoming, but Rick, who thought he could lead a rebellion against the people of Terminus, ended up being in line to be slaughtered. Along with Rick were Glenn, Daryl, and Bob on the chopping block (quite literally). However, there was no way we could lose such major players so early into the season. The scenes showing the human carcasses drying in the meat locker were almost too hard to handle. On the episode of Talking Dead that followed the premiere, executive producer Scott Gimple confirmed that Terminus was indeed filled with cannibals, and that plate Mary offers visitors serves as a sort of test for visitors. Once you eat a plate or two, they reveal that it's people. If you're OK with it, you can stay as one of the living in Terminus. If you're not, you end up in a train car.

If anyone thought The Walking Dead would ease us into the new season, they couldn't have been more wrong. Things got off to an intense, disturbing start and I doubt things will be slowing down anytime soon.